ALA president celebrates in North Miami

NMPL has experienced a dramatic transformation, recently finishing a renovation that included the addition of new public computers, interactive learning devices, and a multipurpose area for classes and workshops.

In addition, there were speeches from representatives of the library’s Friends group, a community activist, a youth and family advocate, and area youth groups. One young speaker asked, “Have you ever thought about the importance of the library? It’s important because some people don’t have internet at home to do projects; some people can’t afford to get books for their children in order for them to read better.”

To commemorate the event, State Librarian Amy L. Johnson wrote a letter to express her excitement at the opportunity for the library to demonstrate “the many ways we seek to transform and meet the everyday needs of the community.”

She continued, “Broadly diverse in our population, we provide services to the young and old, speakers of many languages, and folks in every walk of life. Our spaces provide a safe place for people to learn and celebrate both our differences and the things we have in common.”

Garcia-Febo closed the proceedings by praising the library for such resources as Career Online High School for residents 19 and older, summer reading programs, and English-language classes.

Garcia-Febo used the event as an opportunity to speak on behalf of school librarians and called for full funding for public and academic libraries.

The visit to North Miami was among the highlights of a three-day series of visits to both public and academic libraries. On February 8, Garcia-Febo visited Hubert Library at Florida International University’s (FIU) Biscayne Bay Campus. She met with academic librarians from FIU collaborating with NMPL, the local historical society, and Barry University to preserve historical documents and photos.

Update: The photo caption originally said NMPL was in North Miami Beach, not North Miami. The caption has been corrected. 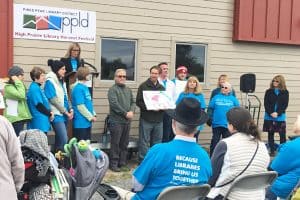 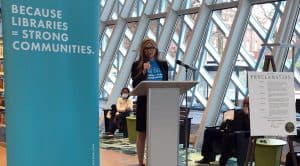