Hundreds of library supporters gathered in Washington, D.C., on May 4 and 5 to to discuss library issues with members of Congress during the American Library Association’s 41st annual National Library Legislative Day. In a series of meetings, advocates urged their congressional representatives to fund the Library Services and Technology Act (LSTA) and to support programs that provide school libraries with needed funds for materials. Additionally, advocates asked legislators to support library policy issues, such as the restoration of reasonable expectations of privacy from the government.

This year’s library advocates were not just librarians; the North Carolina Library Association brought dozens of K–12 students and their parents, while Michigan State Librarian Randy Riley brought his daughter Madeline, who is studying public policy at the University of Michigan.

The annual advocacy event kicked off on Monday, May 4, with former Sen. Byron Dorgan (D-N. Dak.) discussing the importance of constituent advocacy during his opening address.

“We’ve got people trained in research opportunities,” said Dorgan. “In all the money that we spend on infrastructure—schools, roads, and bridges—we need to allocate money for libraries.”

During the opening briefing, several expert panelists lauded the library community for its role in positively affecting the outcomes of several key policy issues, such as robust federal library funding, strong and enforceable net neutrality rules, and a modernized E-Rate program. Earlier this year, grassroots library advocates sent 6,160 emails and letters to members of Congress to request that they endorse funding for the LSTA and the Innovative Approaches to Literacy program. As a result, close to 100 legislators signed the LSTA appropriations letter, and 150 legislators signed the Innovative Approaches to Literacy letter.

“You all know how to hold people’s feet to the fire and that’s fantastic,” said Barber, adding that more library advocacy work is needed to push Congress to include language in the reauthorization that supports effective school library programs.

“We’re going to need your help in crafting amendments that can strengthen the Every Child Achieves Act,” said Moira Lenehan-Razzuri, legislative assistant for Sen. Jack Reed (D-RI), referring to the bipartisan bill introduced in April that would reauthorize and reform the Elementary and Secondary Education Act.

“When it came to E-Rate and net neutrality, we wanted to make sure we were not forgotten or overlooked, and fortunately through ALA’s advocacy efforts, we were able to make a difference,” said Windhausen. “Our next challenge is upholding our successes in Congress.”

By the time many participants finished the first day of Library Legislative Day events, many were excited to build on the past year’s record of successful advocacy.

“You can do all of the emailing and phoning, but having a direct conversation with staff is so important,” said Beryl C. Roblin from the Blackwater Regional Library in Virginia.

“One of the reasons I like to come is to speak directly with the congressman’s mouthpiece, which is the staff person,” said James Sanderson, supervising librarian at Newport News (Va.) Public Library. Sanderson has participated in Library Legislative Day for nine years. “Without our services, people wouldn’t be able to find jobs and start businesses. That’s why LSTA funding is very important.”

“I think it makes a big difference to have people come through the door who represent all of your constituents,” said Mary Heinzman, executive director of information resources and library director for St. Ambrose University in Davenport, Iowa, whose delegation met with Sen. Chuck Grassley (R-Iowa) to discuss concerns. 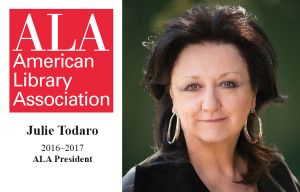