Saturday’s Games and Gaming Round Table’s featured program—“Come Make a Game”—was filled with more than 100 people and hummed with an enthusiasm rarely seen at programs. “This is the most energy I have seen in one of my sessions,” said Scott Nicholson, associate professor at the School of Information Studies at Syracuse University and director of the Because Play Matters game lab.

Nicholson led attendees through the process of running a “game jam,” giving them the tools and confidence to run one back at their own libraries. Game jams are design activities, either analog or digital, in which groups of people work together to make a game within some constraints, such as time, materials, and/or theme.

Attendees began by playing Awesome Time, a game with almost no rules other than to take turns rolling the dice; the first person to the end of the path wins. While amusing within the context of the group, the game 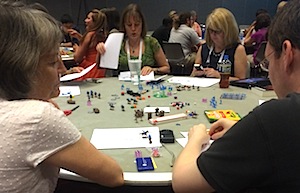 is intentionally broken with lots of uncertainty in the rules. (What happens if you land on another player? Do you need exact count to get to the end?) It also lacks any real mechanisms or a theme, features that often make games engaging and enjoyable for players. That is where the “jam” comes in.

Next the groups were told go back and fix the game, trying to make it better by adding such elements as:

To help with the task, each table was loaded with game bits from Eagle and Gryphon Game’s game designer toolkit, which was a product of a successful Kickstarter campaign (the company plans to release more toolkits soon). Eagle and Gryphon Games is currently on the exhibit floor, in booth #2010, sharing space with Mayfair Games and GameRT.

The rest of the session was a frenzy of creativity and laughter as librarians worked together “fixing” Nicholson’s broken game and slowly designing their own. While time did not permit sharing, in application patrons and student could then share their game designs with one another or introduce them to the community in an open house or game fair where they can talk and discuss their designs.

All the fun and excitement aside, the program was important as it helped showcase how gaming programs in libraries are moving forward, beyond recreational and outreach services, and that gaming can support instructional support and tie in with maker and community programs.

BRIAN MAYER is a gaming and library technology specialist. He designed Freedom: The Underground Railroad (Academy Games, 2013) and is coauthor of Libraries Got Game: Aligned Learning through Modern Board Games (ALA Editions, 2010). 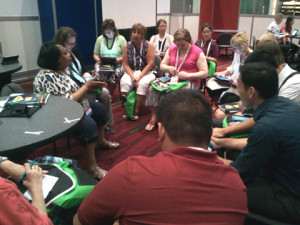 Literary Tastes: Celebrating the Best Genre Reading of the Year