As you round the corner of 9th and G streets in Washington, D.C., your eyes are immediately drawn to the looming 47-foot-high wall art, Uncensoreddc, which heralds a special exhibition around issues of personal privacy and the freedom to read in honor of Banned Books Week, September 27–October 3, 2015. The large-scale banner by local artist Nekisha Durrett is part of an exhibit housed at historic Martin Luther King Jr. Memorial Library, which features the work of 10 artists around this year’s theme, “UNCENSORED: Information Antics.“

Hosting a tour of the installations showcased on the first and second floors of the library, Matthew Mann, MLK library associate and curator of the exhibit, says the exhibit was organized to underscore the library’s commitment to the rights of freedom of speech and expression.

Several artists focused on potential threats to personal privacy posed by government data collection. For example, Hasan Elahi’s Section 215 features a large-scale pigment image of the rooftop of the National Security Agency (NSA) building. Images of the NSA rooftop are overlaid with Morse code of Section 215 of the Patriot Act, the section that deals with government access to library content. These mural size sheets were then cut and affixed to four doorways in the library. Elahi says his work “examines issues of surveillance, citizenship, transport, and borders and frontiers.” Mann says Elahi’s work and that of several other artists “reveal the opposite philosophical ends of the spectrum of an agency, such as NSA, which is all about gathering information, and the library, which is all about access and freedom to distribute information.”

Each artist’s work is uniquely compelling. Fabiola Yurcisin’s Shrine to the Typed Word, for example, features typewriter ribbons woven together in sections within an old-style phone booth. Yurcisin says one of her aims is to “create work that responds to the action of keeping something under control or within limits.” She often incorporates images of now-arcane technologies in her work.

The exhibit is on display at the MLK Library from September 25 t0 October 22.

NANCY GRAVATT is the press officer for ALA’s Washington Office. 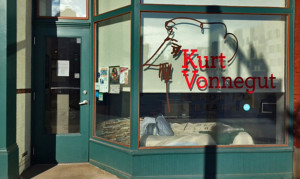 Locked Up with Vonnegut, Day One 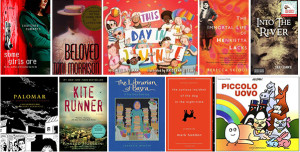