Committee on Organization announces changes to the OLOS Advisory Committee

In its role facilitating the merger, ALA’s Committee on Organization has put forth two changes to the OLOS Advisory Committee, changing its name to the “Equity and Inclusion Office Advisory Committee” and establishing its new mission (reprinted in full below).

Unsurprisingly, the announcement of this merger caused concern among the members in attendance at the Diversity, Literacy, and Outreach Services All Committee Meeting. Some pushback was anticipated, and the Committee on Organization circulated copies of its proposal for review and solicited questions and comments.

One attendee expressed concern that members would lose representation without the Office for Diversity. Another member questioned the removal of diversity from the committee name and wondered if replacing diversity with inclusion would impart the same connotations for what the committee would be expected to do and which populations it would be expected to serve. Here, ODLOS Director Jody Gray worked to mitigate attendees’ anxieties, stating that it would be “more detrimental to the work that [the committee does] as two entities when [the committee] is expected to be working as one.” Gray assured those in attendance that she and her staff planned to ensure that “everybody is taking responsibility for diversity and inclusion,” and she defined the new role of the committee as “needing to hold people accountable in the rest of the organization.”

When attendees questioned the name change and the decision to drop diversity, literacy, and outreach from the title, Gray emphasized that the decision to move to a more generic title was intentional and meant to ensure that one group was not favored over another. She said, “There is a real tendency for people to use [diversity] as a shortcut … it has lost its meaning.” Hence, the move to the word “inclusion,” which is meant to challenge groups to figure out how they interact with each other. Gray stressed, “Nothing … was not debated heatedly. … There is room to grow.”

Feedback from the crowd was not all negative. Matthew Ciszek, head librarian at the Lartz Memorial Library at Penn State Shenango, expressed enthusiasm about the merger and supported a move to a more productive conversation: “The time to debate whether or not it’s a good idea to merge these two offices is over.” While Gray conceded that she, like most in attendance, were blindsided by the merging of the two groups, she, too, pointed out that the decision has been made, and it is irreversible. Like Ciszek, she thought positively about a future working with a more unified group, “It’s great now that were being more intentional about it. . . . I think we can do a lot together.”

The mission for the Equity and Inclusion Office Advisory Committee will be as follows: 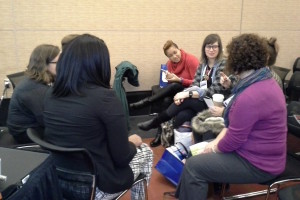