“Nobody ever wants to be vice president someday,” said Sonia Alcantara-Antoine, director of libraries and information services for the City of Newport News, Virginia. “[But] I resisted the path of being a director because it scared the crap out of me.”

Alcantara-Antoine—who at first didn’t pursue director-level leadership because she thought she was too shy and “didn’t see many directors who looked like [her]”—was one of four panelists sharing candid experiences and advice at the Public Library Association Conference’s “Wonderful World of Being a First-Time Director” session on March 22. Panelists included current first-time directors at public libraries who have been on the job between six months to a year and a half.

“It is the best job ever,” said panelist Peter Bromberg, executive director of Salt Lake City Public Library System. “I’ve said that about every job in my 25-year library career,” he laughed.

The directors started the program by sharing how they came to their roles. For Monica Harris, executive director of Schaumburg Township (Ill.) District Library, management has been an avenue for helping people. She described herself as the “awkward kid” growing up and said she valued “having an opportunity to connect through those public library spaces.”

Richard Kong said he was partly inspired to pick public libraries over academic libraries by Nancy Pearl. As Pearl was autographing her librarian action figure for him, she told Kong, “‘Go into public—we need good people in public,’” he recounted her saying. He returned to Skokie (Ill.) Public Library at his former colleagues’ urging to become a deputy director and was then to promoted to director when Carolyn Anthony retired in 2016. “She’s a legend,” Kong said.

The program quickly moved to a Q&A format, with panelists tackling queries from Twitter and the crowd. Some key conversations included:

What did your first 90 days look like? “The first 90 days was about listening, learning, and relationship building … not mucking around trying to change anything,” said Salt Lake City’s Bromberg. He spent the first three months doing a “listening tour” within his system. Alcantara-Antoine echoed this sentiment; she spent her early days visiting all branches, introducing herself to area library directors, and getting to know other city department directors.

Have you had to make a scary cultural change? Alcantara-Antoine described a situation where, six weeks into the job, she was asked to trim 5% from the library’s budget. “All the fat was trimmed off a long time ago,” she said, so she relied on her managers’ expertise for direction. Importantly, she was direct with her employees about quelling budget-related gossip or speculation before it started. On an opposite note, Harris reminded the audience, “Change can be slow, especially cultural change.” She added, “It’s really important to be an incrementalist as a director. If you can’t take those small wins, you’re going to have a really tough time.”

Any advice for those applying to director jobs? Kong suggested reading the board meeting packets of the library you’re applying for. Added Bromberg: “Prepare for it like you’ve never prepared for anything in your life, and then double it.” 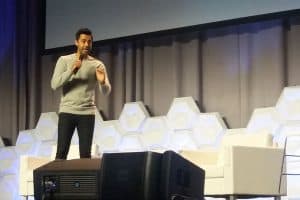 Hasan Minhaj Plays an Away Game

The comedian closes PLA 2018 with observations on fear and empathy 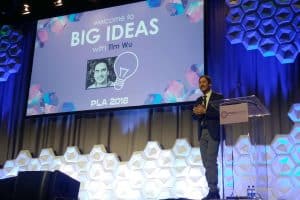 A Free and Public-Serving Internet