You might not give much thought to urban agriculture, campus conversations, reusable mugs, or student programs in the context of libraries or climate change, but the four librarians presenting “Planting the Seeds: Libraries and Librarians as Change Agents for Sustainability in Their Communities,” a session sponsored by the Sustainability Round Table at the American Library Association’s Annual Conference and Exhibition in Orlando, Florida, think these all have a role in combating environmental problems.

“Climate change is a material reality,” said Jodi Shaw, children’s librarian at Brooklyn Public Library (BPL) who was speaking on behalf of herself and not her library. “For libraries, we need to take a more local approach to acquiring resources.”

She suggests one way to do that is converting urban rooftop space to food-producing farms—seeing the “Library as a Farm,” including the 60 rooftops, or approximately 138 acres, of BPL’s branches. “As I was leaving LaGuardia the other day, I saw all these rooftops, and all I could see was farmland,” Shaw said.

She added that urban farming could establish a visceral connection between a person’s food and food source, and help them to become more educated and less wasteful. Benefits in addition to food, she said, include insulation, use of wasted space, community building, self-reliance, and eliminating food deserts in cities. “I believe radical adaptation is what we’re facing,” Shaw said.

At University of Massachusetts Amherst, that belief is shared by a group of students, staff members, librarians, and faculty members who meet at the library to talk about climate change. The program combines prompts and open-ended discussion, science and personal narratives, journaling and, potentially soon, guided meditation. “We were very nervous to do this program,” said Madeleine Charney, research services librarian. “We thought we’d be seen as strange, radical people.”

But Charney believes that communicating the threat is important, and the writing from these meetups should be treated as artifacts to show the paradigm shift of when our population finally got scared and serious about climate change.

“We had a really big waste problem,” said Lock. Wake Forest’s “Wake the Library” program, which provides free snacks and 24-hour coffee service, was able to reduce its waste by using less packaging, composting food waste and plates, encouraging water bottle refills, and—its most memorable idea—having a coffee mug giveaway. Some students took it a step further and got other students to sign sustainability pledges.

Sustainability is at the center of Raymond Pun’s work. A first-year-student success librarian at California State University, Fresno, he does embedded librarianship for STEM courses that focus on campus sustainability.

“My role is to do workshops for 150 students and to make it interesting,” said Pun. This usually involves lively research questions that aim to teach data needs and data literacy while solving real problems, such as “Is air quality better during winter or spring?” or “Which kind of tree is most beneficial to campus?”

A question and answer period followed the sessions, where presenters couldn’t stress enough how important it is to have conversations about sustainability and make changes—however big or small. 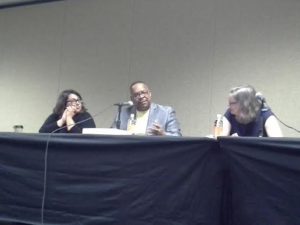 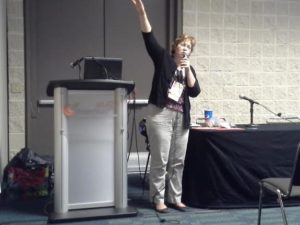