After 30 years on the Supreme Court, Justice Anthony Kennedy announced his intention to retire at the end of July. What does his decision—and his potential replacement by Trump nominee Brett Kavanaugh—mean for libraries and other advocates of intellectual freedom?

American Libraries asked Deborah Caldwell-Stone, deputy director of the American Library Association’s Office for Intellectual Freedom (OIF) and an attorney by training, to reflect on Kennedy’s rulings and impact.

“Kennedy was certainly a free speech advocate,” says Caldwell-Stone. She points to United States v. American Library Assn., the 2003 case in which the court ruled that Congress can force libraries that receive federal funding to use pornography-blocking software filters on library computers, but that libraries are to remove the filters if asked to do so by patrons. In that instance, Kennedy filed an opinion concurring with the majority judgment.

“What Kennedy said was that the law as written was not unconstitutional, because all it did was ban access to materials that were already defined as unprotected speech,” such as child pornography, Caldwell-Stone says. “But he said that there was a great possibility that the technology would block access to a large swath of constitutionally protected content for adults, and that would violate the First Amendment.” He therefore issued an invitation to free-speech groups to return with evidence of such violations, “but I guess that invitation has expired now,” she notes.

She also points to Packingham v. North Carolina, the 2017 case in which the court unanimously ruled that a North Carolina law barring previously convicted sex offenders from social-networking sites violated the First Amendment. “The decision was written by Kennedy, and it’s his paean to free speech and the ability to freely use the internet without any restrictions by the government,” she says.

That decision reads, in part: “By prohibiting sex offenders from using those websites, North Carolina with one broad stroke bars access to what for many are the principal sources for knowing current events, checking ads for employment, speaking and listening in the modern public square, and otherwise exploring the vast realms of human thought and knowledge. These websites can provide perhaps the most powerful mechanisms available to a private citizen to make his or her voice heard.”

“Kavanaugh, on the other hand, is not necessarily going to be such a good friend to free speech or the other issues that librarians often care about,” Caldwell-Stone says. “For example, he feels that the net neutrality rule was not legally put into place under Obama, and he believes that net neutrality violates the free speech rights of internet service providers. He is known for the fact that he does not believe in giving deference to agency decisions or regulations or interpretations of law, and that will have implications for any legal issues that arise in regards to what the Federal Communications Commission or other agencies can do.

“We’ll probably be looking at someone who will vote with businesses and against the interests of individuals to access information,” she continues. She speculates that Kavanaugh will be friendlier to the idea that electronic surveillance is consistent with the Fourth Amendment. “We can’t know from situation to situation how he might rule. But in general, we likely would be better off with a candidate who was not already hostile to things like net neutrality.”

Justice Kennedy and the First Amendment: A Timeline

Texas v. Johnson: The court held that burning the United States flag was a protected form of symbolic political speech, concluding that there is no legitimate government interest in protecting the US flag where the sole act in question is destroying the flag in its symbolic capacity. “A bedrock principle underlying the First Amendment is that government may not prohibit the expression of an idea simply because society finds the idea itself offensive or disagreeable.”

Sable Communications of California v. FCC: The Supreme Court overturned a Telecommunications Act ban on indecent telephone messages, concluding the law violates the First Amendment because the statute’s denial of adult access to such messages far exceeds that which is necessary to serve the compelling interest of preventing minors from being exposed to the messages. To allow the ban to stand would have the effect of “limiting the content of adult telephone communications to that which is suitable for children to hear.”

Simon & Schuster, Inc. v. Crime Victims Board: The court’s unanimous decision struck down New York’s “Son of Sam Law,” which required book publishers to turn over to the state any proceeds from a book written by any person convicted of a crime, related to or about that crime. The court agreed that many important books—including The Autobiography of Malcolm X, Thoreau’s Civil Disobedience, and works by Martin Luther King Jr.—perhaps might not have been published with such a law in place.

R.A.V. v. City of St. Paul: St. Paul, Minnesota, passed an ordinance that banned “hate speech,” any expression, such as a burning cross or swastika, that might arouse anger, alarm, or resentment in others on the basis of race, color, religion, or gender. The court struck the ordinance down in a unanimous decision as unconstitutionally discriminating based on the content of expression: The law banned only fighting words that insult based on race, religion, or gender, while abusive invective aimed at someone on the basis of political affiliation or sexual orientation would be permissible. The law thus reflected only the city’s special hostility towards certain biases and not others, which is what the First Amendment forbids.

KENNEDY: Joined in the majority opinion.

Denver Area Ed. Telecommunications Consortium, Inc. v. FCC: In a decision that produced six opinions, the Supreme Court upheld a federal law permitting cable system operators to ban “indecent” or “patently offensive” speech on leased access channels. The court also struck down a similar law for nonleased, public access channels and a law requiring indecent material to be shown on separate, segregated cable channels. The case is significant in that the court affirmed that protecting children from some speech is a compelling state interest.

KENNEDY: Concurred in part and dissented in part.

Reno v. American Civil Liberties Union: In a unanimous decision, the Supreme Court declared unconstitutional a federal law making it a crime to send or display indecent material online in a way available to minors. The decision completed a successful challenge to the Communications Decency Act by the Citizens Internet Empowerment Coalition, in which ALA and the Freedom to Read Foundation played leading roles. The court held that speech on the internet is entitled to the highest level of First Amendment protection, similar to the protection the court gives to books and newspapers.

United States v. Playboy Entertainment Group, Inc.: In a 5–4 decision, the court upheld a US District Court decision that Section 505 of the Telecommunications Act of 1996 violated the First Amendment when it sought to restrict certain cable channels with sexually explicit content to late night hours unless they fully scrambled their signal bleed. The court ruled that the government may have a legitimate interest in protecting children from exposure to “indecent material.” Section 505, however, is a content-based speech restriction and therefore must be the least restrictive means for meeting the governmental interest. The court found that Section 505 is not the least restrictive means.

Ashcroft v. Free Speech Coalition: The court affirmed the Ninth Circuit’s judgment invalidating the Child Pornography Prevention Act of 1996 on the grounds that its ban on any depiction of pornographic images of children, including computer-generated images, was overly broad and unconstitutional under the First Amendment. Kennedy wrote: “First Amendment freedoms are most in danger when the government seeks to control thought or to justify its laws for that impermissible end. The right to think is the beginning of freedom, and speech must be protected from the government because speech is the beginning of thought.”

United States v. American Library Assn.: The court ruled that Congress can force libraries that receive federal funding to use pornography-blocking software filters on library computers. However, libraries can remove the filters if patrons ask them to do so.

KENNEDY: Filed an opinion concurring with the judgment.

Packingham v. North Carolina: The court unanimously ruled that a North Carolina law making it a felony for a registered sex offender “to access a commercial social networking website where the sex offender knows that the site permits minor children to become members or to create or maintain personal web pages” violated the First Amendment. 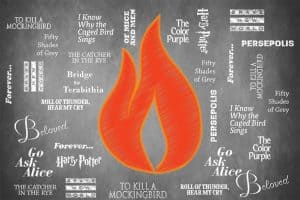 Filtering and the First Amendment

When is it okay to block speech online?