For those that have never been to SXSW Interactive, the first thing to know is that it is massive! There are over 15 conference locations, 500 sessions, and 30,000 attendees. And that doesn’t take into account the unofficial events, the lounges, and the parties. Basically, it’s a conference on steroids. It’s easy to get overwhelmed and easy to find a connection, new idea, or free drink around every corner. What is hard is trying to boil my experiences and interactions down into a few blog posts, but I will try.

First, the serious stuff. If you are interested in privacy and our civil liberties (and if you’re not, you should be), please take some time to listen to the talks given by Julian Assange, the founder of WikiLeaks (video, 1:01:57), and Edward Snowden, the former NSA contractor who released information about the agency’s surveillance of Americans (video, 1:01:22). Both of these men are living in asylum and chose to present virtually at SXSWi in order to speak to tech professionals and those that can create the tools to make a difference. As a librarian and a citizen, I found both of these talks to illuminate my understanding of survellance, privacy, whistleblowing, and technology. You can find recordings of these conversations here: 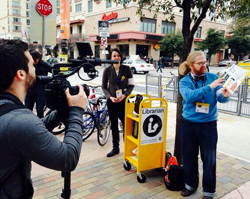 Next, the serious stuff with a fun twist. Much of the work being done by library professionals at SXSWi involves bringing greater awareness of the 21st-century library and the connections between the work that we do and the tech world. Brian Bannon, commissioner of Chicago Public Library, spoke on a panel with a marketer and a programmer about creating and sustaining innovation in large institutions. Urban Librarians Unite, an activist group out of New York City, sent founders Lauren Comito and Christian Zabriskie and their Volunteer Library Brigade book cart to do street activism about libraries, including spontaneous storytimes for folks standing in one line or another. And the #sxswLAM team, coordinated by Stacie Ledden (Anythink), Mel Gooch (San Francisco Public Library), and Cindy Fisher (University of Texas Libraries), asked people to tweet at their local public library in order to get a free drink coozie. Much of this advocacy took place at a booth on the exhibit floor sponsored by library vendor Innovative Interfaces, Inc. and coordinated by Joe Murphy, who provided the space for library folks, including ALA, to have a greater ability to have formal conversations with participants. 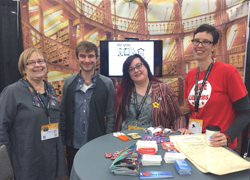 And finally, just the fun stuff. If you are a fanperson, there are a ton of celebrities at SXSWi. I had an opportunity to see George Takei, Adam Savage, and Kevin Bacon, all speaking in various sessions about technology, social media, and connectivity. Others saw Nicolas Cage, Rosario Dawson, Cory Doctorow, Snoop Dogg, Lady Gaga, and Kristen Bell, who premiered her Veronica Mars movie here). There are also fun, interactive experiences like the RVIP, a roaming karaoke bar on an RV, which is a great way to meet folks and talk about libraries. (See Ann Awakuni’s post about the interactive exhibits at the Gaming Expo and Create space.)

SXSWi has something for every library professional, and I hope these blog posts are giving you a taste of the diversity of experiences we’re having here. In my next post, I’ll talk about a few of the sessions I’ve attended that have really impacted me and given me great ideas to take back to my library and colleagues there.

MARY ABLER is a public librarian currently employed as an Innovation Leadership Program Resident, a joint project of the Los Angeles Public Library and the Library Foundation of Los Angeles. 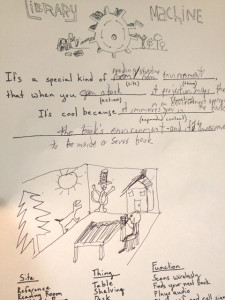 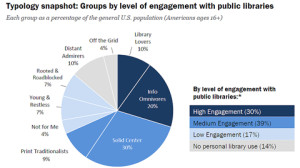 Pew Charts the Motivations of Library Lovers and Distant Admirers