The Insight of Interstitial Identities

Savala Nolan offers commentary on race, gender, class, and the body from a "polyphonic" perspective

“I’m thrilled to be here with you today,” said Nolan, “both as a first-time author but also as a person who loves libraries and is a library patron. I brought my library card along, just in case there were any doubts about the authenticity of that claim.”

Nolan told viewers that she feels lucky she might be able to see her debut book, Don’t Let It Get You Down: Essays on Race, Gender, and the Body (Simon & Schuster, July), on library shelves soon.

“[The book] is a collection of personal essays that are deeply political, and I hope universal,” she said. “I write about race and gender and the body and, to an extent, class, because these things are so enduringly definitional in our lives and in our culture—and because I straddle them in some ways that give me insight.”

Nolan straddles multiple identities: Her father was Black and Mexican but her mother is white. She’s descended from enslaved people on her dad’s side and slaveholders on her mom’s side. She went to wealthy private schools on scholarship but is not from wealth and has family members who have experienced abject generational poverty. She’s a lawyer who has moved in elite circles but she’s also watched her dad deal drugs to support the family. She’s been thin and fat at different times throughout her life and “learned things about gender that I wouldn’t know as intimately if I hadn’t been on both sides of that line,” she said.

“I give you this kind of résumé of polarities just to give you an idea of how my perspective on these issues is often multivalent, polyphonic,” Nolan said. “It’s sort of like I’m on the balcony and the dance floor at the same time.”

Nolan made a conscious choice to root all of her essays in the body—often hers, but other bodies too. “The body is where it happens—that’s where we experience race and class and gender,” she said. The body is “the site of really deep knowledge and pain and humor and insight and epiphany. The personal and political are in constant collision in our bodies.”

She also noted that the title of her book, Don’t Let It Get You Down, was something that her hairdresser of a decade, an older Black man, said to her the day she was at the salon and saw the headlines that the cop who shot and killer Tamir Rice was not going to be prosecuted. “He could see I was shaken and he took a breath and he said, ‘Don’t let it get you down,’” she said. “He said it twice and he said it with so much weariness and warning in his voice…. I realized what he was offering me as an older Black person speaking to a younger Black person was a survival strategy.”

For Nolan, the essay in her book that best captures this survival strategy is “To Wit, and Also,” a heavily researched piece about her slaveholder ancestors in Virginia that came about after she discovered a deed that her fourth-great-grandfather Vincent wrote. “[In the deed,] after the livestock, he lists three people. Their names were Filliss, Grace, and Peggy. He lists them by name. Two woman and a girl. These were people that my family enslaved,” she explained. “The essay is about coming to terms with that fact; it’s about authenticating the deed, and it’s about becoming willing to see the truth and reckon with it, not to kind of fix it somehow without reckoning.”

Though the essay was painful for Nolan to write, she is incredibly proud of it. And it would not have happened without the support of libraries.

“I’m so indebted to you [viewers] because this piece is one of the chambers of the heart of the book and it wouldn’t exist without librarians, in particular the librarians at UC Berkeley Library and the Library of Virginia,” she said. “This was tough research. It wasn’t like researching colonial cake recipes or something, which, I’m not knocking cake … but this was of a different order. This was looking at page after page after page of handwritten notes that laid out in the most cold, cruel, efficient language my family trafficking other human beings, year after year.”

“It was incredibly valuable having people walk me through the material,” she continued. “And of course, the practical stuff that’s not as sexy but equally important, like having somebody willing to wrap up the microfilm and tape the envelope and double-check the address and put it in the mail to get from Virginia to California.”

Nolan closed her speech with praise for libraries and library workers of all kinds.

“Libraries are a sacred space, as much as you can say ‘sacred’ while describing something secular,” she said. “It’s rare to have a space that feels so hallowed and also so warm and public and shared. And for all the people that keep those spaces running and functional, I thank you so much.” 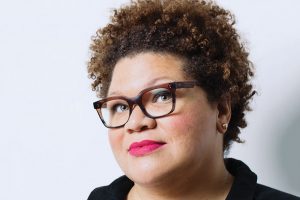 Debut author pens personal and political essays on race, gender, and the body