Women’s March, surprise guest, and inside the belly of a whale

Saturday’s #alamw17 starts off a bit damp, but who doesn’t like a little singing in the rain?

First, you won’t believe all the speakers and authors:

Listening to a huge group of teens talk about the Best Books nominees is, hands down, the best thing ever. #alamw17

Midday, librarians either took a break, joined the Atlanta Women’s March, or hit the exhibit floor:

Atlanta's @womensmarch was inspiring to witness. The librarians here at #alamw17 represented well, too. pic.twitter.com/lEB089EWdY

Literally almost cried of happiness today when I found out there's a sequel to Dragons Love Tacos coming May 2017. #alamw17 pic.twitter.com/QUoqQb3lZ0

And some Midwinter observations:

Overwhelmed by how nice everyone is being!! #alamw17

In this meeting, only one person is not wearing glasses. #alamw17 #tiredobservation

Overheard on shuttle: I'd get a smartphone, but I'm too afraid it might be smarter than me #alamw17

Marriott atrium — looking much like the belly of a whale #alamw17 pic.twitter.com/tV3sXKxmSx

Of course, it wouldn’t be Midwinter without one surprise guest showing up.

Love being with my library peeps at @alamw in Atlanta. Thank you for the warm welcome. #alamw17 pic.twitter.com/1AiEWIbDWu

P.S. #alaleftbehind, we’ll make sure to report out from NPH’s closing session on Monday.

Spending some of my #alaLeftbehind watching @ActuallyNPH in #UnfortunateEvents. Sort of the same, right? #pleasesayyes

A Welcoming and Empowering Future 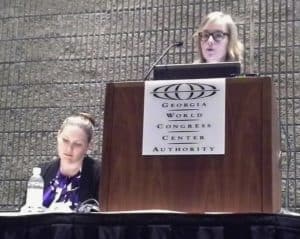