A Welcoming and Empowering Future

Messages of welcoming and empowerment led the first day of the Symposium on the Future of Libraries as social innovators Isha Lee from Welcoming America and Darlene Gillard from digitalundivided shared their visions for the future. Welcoming America focuses on the innovation opportunity in helping communities best prepare themselves as fertile spaces for new immigrants to thrive. digitalundivided built its BIG Incubator program for empowering black and Latina entrepreneurs by looking at the data for black women in tech entrepreneurship in the United States—and rethinking the supportive networks, education, and access to seed funding that would help women launch and sustain their businesses.

An attentive and engaged audience lost no time connecting library professionals’ work to these innovators’ approaches, from citizenship corners to entrepreneurship programs for teens and young adults. Several attendees’ noted their libraries’ participation in National Welcoming Week, an event organized by Welcoming America that helps communities bring together immigrants and U.S.-born residents in a spirit of unity to raise awareness of the benefits of welcoming everyone. The network of support created by digitalundivided’s BIG Incubator Program reminded many of libraries’ growing efforts to create networks of knowledge-sharing community members, bringing local experts together with interested learners in the library’s space.

Lee’s and Gillard’s discussions emphasized the value of metrics to highlight the value of work, communicating the economic benefits their program’s efforts provide to cities and neighborhoods, though Lee made the particularly important note that true social innovation requires consideration of the whole person’s needs, not just their perceived economic value or benefit.

The day’s breakout sessions continued a focus on empowerment and positive futures. A full room of attendees considered the “Future of Librarian Labor” in a session led by Emily Drabinski and Eamon Tewell from Long Island University Brooklyn. Using several examples of recent labor conflicts, Drabinski and Tewell made clear the  positive power library professionals have when we leverage our organizational skills to map our colleagues and allies, talk with each other, and incrementally build toward brave and coordinated actions.

In “Think Universal… To Design Accessible Services for All,” speakers Patrice Johnson of Chicago Public Library, Pat Herndon of the Georgia Library for Accessible Statewide Services, and Jill Rothstein of New York Public Library’s Andrew Heiskell Braille and Talking Book Library provided examples of accessibility accommodations that have benefits beyond any single audience. Tools like curb cuts and closed captioning  can provide improved experiences for all people. If libraries and other organizations think with a universal approach, they can move from segregating people with disabilities to  developing innovations that integrate and include all people. One in four adults will have a disability at some point in their lives, which should encourage everyone to view accessibility as benefiting “us,” not some vaguely defined “them.”

A welcoming and empowering message were key to “Enhancing Public Library Programs though a Family Engagement Framework,” which shared research and practice for libraries engaging entire families as a means of promoting and advocating for children’s learning anywhere and anytime. The program was built around the Public Library Association’s family engagement work, which began in 2015 and made a call to action in 2016 with the publication of Public Libraries: A Vital Space for Family Engagement.

Knowledge discovery—the ability to make useful connections between concepts in sometimes seemingly-unrelated disciplines—has long been a dream and goal of librarians. At “Knowledge Discovery: The Next Generation,” part of the Symposium on the Future of Libraries, Yewno cofounder and Chief Business Development and Strategy Officer Ruth Pickering posed questions to a panel of university librarians about their use of Yewno. Chris Bourg, director of libraries at Massachusetts Institute of Technology in Cambridge, expressed her longtime interest in discovery environments, and emphasized the importance of user control over information discovery. “The way that we discover information affects our knowledge and our way of accessing ideas,” she said. 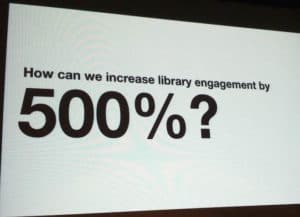 Collections took center stage in one of the final sessions of the first day. In “Taking the Library Viral,” Trey Gordner of Koios and Corrine Hill of Chattanooga Public Library asked library professionals to focus on where library users and, importantly, potential users, currently search for information, services, content, and books. While ILS systems remain important tools for discovery, a growing number of technologies are widely used across our communities for searching and finding information. Gordner spoke of his journey translating his digital marketing and advertising work experience into a library context, working to increase visibility and user engagement within commonly-used digital search spaces such as Google. Using geotargeting and search engine optimization (SEO) based on specific user queries, library collections and services could become more prominent even for non-library users. In an age of increasing personalization, libraries may need to balance patron user experience with shifting personal privacy preferences.

The first day of the Symposium featured several rooms at capacity, making clear that library professionals are excited for what’s next and ready to share their positive visions for the profession’s futures.

MIGUEL FIGUEROA is director of ALA’s Center for the Future of Libraries. 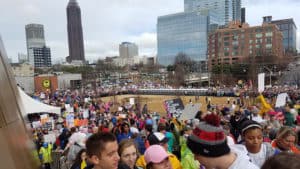 Librarians on the March

Women’s March, surprise guest, and inside the belly of a whale