Opening day of the 2015 ALA Annual Conference was in good company with the Supreme Court ruling that legalizes gay marriage. Annual is taking place during a very busy Pride Weekend; with this victory, the conference looks to be an especially exciting one.

The twitterverse was ablaze with support and excitement!

We are in San Francisco during Gay Pride Weekend w/ the largest group of intellectual freedom fighters in the country–librarians! #alaac15

#alaac15 #MarriageEquality #SCOTUSMarriage AND #SFPride on the same weekend!?!? HOLD ONTO YOUR HAT, #SanFrancisco! #LoveWins

Another important topic tackled on Friday was diversity in literature.

lots highlighting the power of the Internet to force diversity in publishing. underscores why Internet neutrality is important! #graphicon15

. @jrome58 says problem with "issue comics" is that they try to be too broad — "real diversity is specific." #GraphiCon15 #alaac15

Diversity in comics for kids is crucial- but if parents are often the problem, then diversity in adult comics is ALSO crucial #GraphiCon15

Thanks for hosting us, San Francisco!

During @alaannual, host cities see a 563,000% increase of crimes where books are used as a weapon. #alaac15

I dropped Harry Potter and the Order of the Phoenix on my foot once. I can attest to how effective books can be as weapons!

I'm fine that I'm not going to ALA. It's not like I'm crying into my coffee. Well, I'm not sobbing loudly. Yet. #alaleftbehind

Be sure to use #alaac15 for all your Annual tweets and #alaleftbehind for those not attending. (We miss you!) You may be joining us from behind your screens or hiking up and down the hills from your hotels to Moscone Center. We appreciate your support! Have a great conference, everyone! 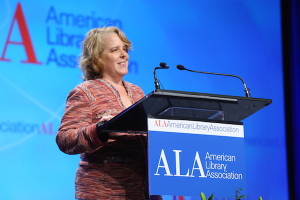 Roberta Kaplan Opens ALA Annual with Celebration of Pride