Reflecting on inclusion in user services

Does eliminating the reference desk create inequity? When Ann Brown was asked this question at a session several years ago, she promised to bring it to the fore. (Brown is an instruction and outreach librarian at George Washington University in Washington, D.C., and 2018-2019 president of the Reference and User Services Association.)

Service decisions’ effect on marginalized communities was the focus of Brown’s president’s program, “Inequity and the Disappearance of Reference and User Services,” on June 22 at the ALA Annual Conference and Exhibition in Washington, D.C. Teresa Morris, reference and instruction librarian at the College of San Mateo, moderated a discussion between Nicole Cooke, program director for the master’s of library and information science program at the University of Illinois, Urbana-Champaign, and Michelle Hamiel, chief operating officer for public services at Prince George’s County (Maryland) Memorial Library.

“If they’ve come in the door, we can meet their needs,” said Hamiel of potential library users. The first step is building a relationship to find out what those needs are. However, Cooke noted, all people bring their own implicit biases to user interactions: what a student looks like, what young people know about technology, what senior citizens expect of their library. In these ways, libraries privilege traditional users by planning programs, services, and resources around these assumptions. Relationship-building with individuals and the community helps break down these biases and create more inclusive services.

Libraries often overlook the role that hiring decisions play in meeting users’ needs, Hamiel said. When a community’s diversity isn’t reflected in a library’s staff, potential users may feel that the library isn’t their space. And, even when libraries hire a diverse staff, other factors (such as a lack of signage in multiple languages or amenities like changing tables and family restrooms) can prevent people from feeling welcome.

“We talk a lot in this profession about recruiting diverse candidates,” said Cooke, “and we don’t always do the best job with that.” Retention is often a problem, and library personnel should be considered as part of the community as well, according to Cooke, because addressing their needs can help a library serve others like them.

“Our professional staff are not as diverse as our support staff,” Hamiel noted. “If we know the diversity exists in our paraprofessional staff, what are we doing to encourage them to go to school?” She urged libraries to look at hiring differently: fund education for support staff if you have the means, recruit from institutions like historically black colleges, and actively fight the stereotypes of the profession.

Inclusivity is a Team Effort

Hamiel encouraged libraries to consider inclusivity in their programs, not only by making diverse programs available, but making sure that general programs are as open and welcoming as possible. She recently denied a program proposal for a daddy-and-me storytime at her library, and while she and her staff are still discussing the decision, she emphasized that there are many children who would not be able to attend, such as children of single mothers, incarcerated fathers, or nontraditional families. For Hamiel, it’s about doing what’s right and focusing resources. “I don’t want children excluded just because we’ve decided who can bring them to that program,” she said.

Cook and Hamiel also addressed how outreach to certain groups is often left to minority staff members. “Emotional labor and fatigue come with being that person,” said Cooke. “I’ve gotten to the point that I have to say, ‘I’m happy to take this on, but I might need to leave something else.’” They encouraged people to work in teams and involve the community whenever possible.

“There is an assumption that because I’m a person of color, I’m going to be accepted in the community, and that might not be true either,” said Hamiel. It’s up to the organization to train its staff and to build trust. Cooke recommended starting with community gatekeepers, such as elders and religious leaders. “And more than likely those conversations need to take place outside the library doors,” Hamiel added. “You need to go where there is trust and have those conversations where community members already have a relationship.”

And, when it comes to outreach, “it doesn’t always have to be grand gestures,” Cook said. “It can be small things that build and culminate.”

As libraries reflect on the effects of their service choices, there will be discomfort. Morris compared the process to a growth spurt. “There are pieces of this process that are going to hurt, but in the end you’ll be a little taller,” said Morris. “Empowerment is growing, getting bigger, and a little more powerful.” 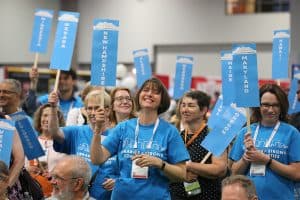 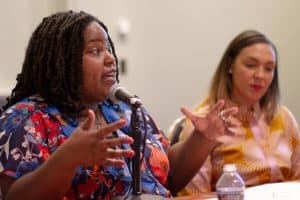