Won’t You Be Matthew Cordell’s Neighbor?

Author and illustrator finds inspiration in the late Fred Rogers

Like many folks who grew up watching children’s television, author and illustrator Matthew Cordell encountered Mister Rogers Neighborhood early on but didn’t think of the late television host often once he grew up. Not until he became a father himself in 2008 did Cordell, who received a Caldecott Medal in 2018 for Wolf in the Snow, become a serious fan.

“I was interested to see [the show] again as an adult and as a parent because a lot of the things that didn’t stand out to me as a child really stood out to me as an adult, particularly some of the quieter moments,” Cordell said in a June 24 address to ALA Virtual attendees. “He wanted you to slow down and listen to what he had to say and what people on the show had to say.”

Cordell’s latest work, the only authorized children’s picture-book biography of Fred Rogers, is Hello, Neighbor!: The Kind and Caring World of Mister Rogers.

“[Rogers] had a palpable love and respect for children; you could feel it from every episode,” said Cordell, who added that he wore a cardigan and sneakers every day that he worked on the book. “Because of the work that I do as an author and illustrator, meeting kids all the time, it was an amazing way to discover someone. We both share a love and desire to meet and spend time with and understand and relate to children.”

Once he had the idea for the book, Cordell followed Rogers’ oft-cited advice to “look for the helpers.” He enlisted the help of Fred Rogers Productions, which granted exclusive use of archival photos, and the Fred Rogers Center for Early Learning and Children’s Media at Saint Vincent College in Rogers’ hometown of Latrobe, Pennsylvania, which maintains an archive of documents, photographs, costumes, puppets, and other ephemera related to the show. (American Libraries spoke to the latter’s archivist, Emily Uhrin, in February.)

Rogers’ message is particularly relevant today, Cordell said: “These are strange times that we’re living in, and I think figures like Fred Rogers can bring peace, calm, kindness, and acceptance as we try to navigate these times, as we try to help each other and ourselves get through it.” 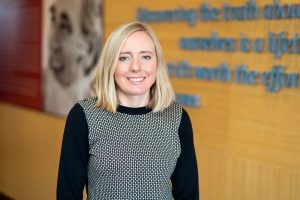