New York City welcomed the 10 winners of the 2009 I Love My Librarian Award with the lighting of the city's Christmas tree at Rockefeller Center. At least the timing made it look that way, and some 750,000 extra people in the streets made it seem as if the entire city had turned out to welcome America's favorite librarians to the December 3 award ceremony at the splendid New York Times building on Eighth Avenue.

Sponsored by the New York Times and Carnegie Corporation of New York and administered by the American Library Association, the award recognizes quality service and dedication by library professionals across the country, nominated by their patrons and selected by a jury of their peers.
Bartenders without booze The $5,000 prize and all-expensespaid trip to New York made a nifty holiday gift, and the speech-filled award ceremony brought tears to the eyes of many as the winners talked about the life-changing benefits of good library service.

Award winner Dana Thomas quipped that she could hardly wait to share the $5,000 prize with her students at Cypress Lake Middle School. "This can go so far!" she said, observing that there was 25 cents left in her materials budget.

Carnegie Corporation President Vartan Gregor ian set the tone with the proclamation that "access to knowledge is a right, not a privilege." He called librarians "the great defenders of freedom and democracy" and libraries "the people's university."

Several winners remarked that in tough economic times, the demand for library services has skyrocketed. Sol A. Gómez said that people who have lost their jobs and people who are homeless are looking to his library for help. "We see it all at the library," he said, "and I'm very proud to be a librarian."

Emphasizing the heightened importance of libraries in troubled economic times, Yasmin Namini, senior vice president for marketing and circulation at the Times, noted that "libraries are open to all but this should never be taken for granted." She praised the winners for their work and their central place in the community as teachers and friends.

Award winner Laura Grunwerg joked that librarians are "bartenders minus the booze," as they listen to the questions and information needs of their patrons and try to help them solve problems that sometimes seem unsolvable.

Winner Carolyn Wheeler told the audience of well-wishers that she has a poster in her library that reads: "Did you ask a good question today?" That, Wheeler noted, sums up the best way to learn to love your librarian.

This year's I Love My Librarian Award winners are representative of the high-standard professionals who work in our nation's 123,000 libraries and who make a difference in the lives of millions of Americans every day. The 10 winners were selected from nominations sent in by more than 3,200 satisfied library patrons.

ALA Immediate Past President Jim Rettig of the University of Richmond in Virginia, and President Elect Roberta Stevens of the Library of Congress handed out the awards. "Throughout the 3,200 nominations that library users submitted for this year's award," Stevens noted, "there were stories of problems solved, lives transformed, families strengthened, learning enhanced, triumphs in research and a bringing together of community. And at the center of it all was a single person: a
librarian." 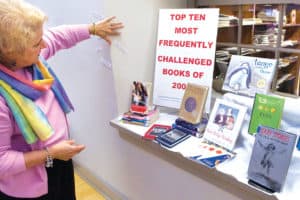 Charleston on My Mind