A Library Occupies the Heart of the Occupy Movement

[For UPDATES since the clearing of Zuccotti Park, scroll to the end.] The People’s Library at Occupy Wall Street in New York City started spontaneously shortly after the protest began on September 17, when a pile of books was left in a cardboard box at Zuccotti Park on Wall Street. The books were passed around and organized, and more were soon added. Unfortunately, this first collection was lost due to inclement weather and another collection was quickly begun. Several weeks later, Betsy Fagin brought the idea of a people’s library before the General Assembly of the occupation and was appointed librarian of Occupy Wall Street. Since then the library has been growing and expanding exponentially. There are dozens of plastic bins dividing the books into categories and areas of interest. There is lighting in place, a reading room, and a constant flow of visitors and patrons.

Zachary Loeb, young adult public programs librarian for New York Public Library, confirmed that the OWS library never truly shuts down. “The occupation goes on 24/7 and so do we.” There is always someone from library staff on hand round the clock, including members of the homeless population, who have contributed efforts to the cause of this free public library. Its primary purpose remains to cater to the information and entertainment needs of the people at the Occupy Wall Street site.

This library has issues and pressures most librarians will never face. For example, weather is a genuine concern. Because no tents are allowed in Zuccotti Park, the library is completely open to the sky—a nice venue on a clear autumn afternoon, but problematic during a thunderstorm. The bookshelves are plastic bins ready to be covered and sealed quickly in an emergency and reopened when the weather clears. Adding another level of instability are ongoing negotiations between park authorities, the city, and the General Assembly of Occupy Wall Street about the state of the occupation and whether—and under what terms—protesters will be allowed to stay in the park. Library Working Group member Briar Somerville told American Libraries, “No matter what happens, the library stays and we stay with the library.” These are people, mostly young people no less, who are willing to be arrested to protect a library that they built with their own hands.

This is one of the purest public libraries out there. It exists to inform and entertain anyone who can access it. Books are donated to the library by supporters, making for an incredible organic collection. It is a circulating library, and one that follows a model a lot of us would envy. Take any book, read it, bring it back when you feel like it. If you don’t bring it back to the People’s Library, then pass it on to someone else. There are no cards, no fees, no RFIDs.

It seems impossible, but it works; numerous library staff confirmed that materials do get returned but, as Library Working Group member Eric Seligson is quick to point out, “If we got back all the materials we have loaned all at once, we wouldn’t be able to handle it. There is so much out there we wouldn’t have space for it all.”

Even though materials are not formally checked out, library volunteers are keeping a record of what the collection encompasses. Library Thing has donated a free lifetime membership to the OWSL and the online catalog is available to browse. There are over 1,500 records that run the range of subject headings. Daniel Norton, a page at the New York Public Library and a distance-ed library student at the University of Maine at Augusta, has been involved in forming the catalog from the library’s inception and sees its holdings as a unique special collection that mirrors the hopes and sentiments of the people supporting Occupy Wall Street. “It is pretty rare and incredible for someone so young and new to the profession to witness the creation of a special collection and the invention of an information system.”

People at the library are incredibly gracious and welcoming. During my visit there this weekend, I detected no sense of “I’ve been here for days, who are you?” Quite the contrary. I was tasked with fixing any problem I saw and empowered to do anything I thought would help. The vast majority of people in Zuccotti Park were friendly, welcoming, and polite. There is a pervasive desire to see, seize, and solve problems—to make a personal contribution to this moment of history.

The People’s Library of Occupy Wall Street faces some issues familiar to public libraries the world over. It has limited resources and seeks to best use them both for Occupy Wall Street users and in the context of the larger community. OWSL also has issues of space and access, growth being among its biggest concerns. Huge contributions of books come in daily. Library Working Group member Frances Mercanti-Anthony, an actress, writer, and self-styled “library nerd,” confirmed that in addition to individuals there are international publishers and booksellers sending books. Seligson hopes to expand programming: The library already holds Friday night poetry readings and wants to add a DVD collection and offer media entertainment. There is a generator, a Wi-Fi hotspot, and plans for free internet access on site.

The Occupy Wall Street Library is an incredible source of credibility for the larger Occupy Wall Street movement. A quick online search turns up dozens of stories from around the world that reference the library, and the prevailing attitude about it seems to be some variation of “these protestors are more together than you think, they even have a library.” This is a strong endorsement both of the movement and of the role of libraries in modern society. The idea that a library is seen as a mark of culture and that creating one is a mark of civic pride and gravitas says a lot about how the institution is still valued by society at large. 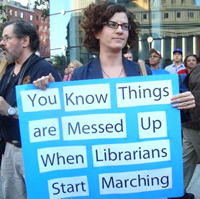 Librarians are also among the protesters calling for economic redress. “Like a lot of people, I first visited the Occupy Wall Street encampment because of a shared frustration and anger towards economic inequality and corporate personhood,” middle-school librarian Rachael Myers (right) told AL, “but I’ve stuck with it because, in the last month, OWS has transformed into a hopeful and optimistic collective voice for change.” Myers, who chairs the Teens Top Ten Committee of ALA’s Young Adult Library Services Association, added, “Librarians have a history of speaking up when it counts, from ALA’s response to the Patriot Act in 2001 to Zuccotti Park today.” 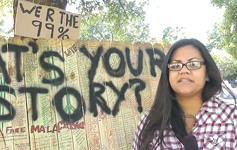 At Occupy Worcester, Massachusetts, another middle-school librarian, Elizabeth Westie, told the October 17 Worcester Telegram and Gazette that she has been underemployed since being laid off more than four years ago, and worries how 20-something graduates will free themselves from student debt when professional jobs are so hard to find. As if to prove Westie’s point, recent MLS recipient Christine Fraser explained in an Occupy Atlanta video posted October 17 that she fears “becoming a slave to debt” from student loans before even landing her first professional library job.

Along with the movement, Occupy libraries are spreading. There are libraries at Occupy Boston, Occupy Seattle, Occupy L.A. (YouTube video), Occupy Portland (YouTube video), Occupy Dallas, Occupy San Francisco, and elsewhere among the more than 100 Occupy sites in the United States that have sprung up since September 17. (The Occupy Wall Street Library blog even posted a letter of solidarity from its counterpart in Madrid, Spain, October 17.) It is becoming a part of the working model of long-term occupation sites that they have a library. This isn’t a formal decision and there is no network or protocols between the libraries. It is simply taken as a matter of course that this niche would present itself and be filled by a library. These hard-working activist library volunteers are ensuring that the revolution will archived and cataloged for generations to come. For more information and to find out how to support the Occupy Wall Street Library, visit the library blog, email owspeopleslibrary[at]gmail.com, or send book donations to: UPS Store Re: Occupy Wall Street, Attn: The People’s Library, 118A Fulton St. #205, New York, NY 10038.

CHRISTIAN ZABRISKIE is the founder of Urban Librarians Unite and coauthor of Grassroots Library Advocacy: A Special Report (ALA Editions, 2012).

UPDATE #1, November 15: Despite fears that the more than 5,000-book collection of the Occupy Wall Street Library was destroyed early in the morning November 15 as the New York City Police Department cleared Zuccotti Park of protesters and their possessions, a photo tweeted by NYC Mayor Michael Bloomberg’s office (reprinted in the New York Times at the end of this story) seems to indicate that at least part of the grassroots People’s Library was saved. The ultimate fate of the library, which can be claimed November 16, remains uncertain since Judge Michael D. Stallman has ruled that protesters may return but cannot erect tents. 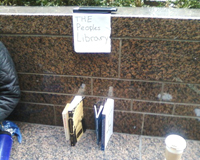 UPDATE #2, November 16 10:10 a.m. Central time: The OWSL blog is reporting that between 2,000 and 4,000 books (including a bible) may have been destroyed in the Monday night removal of Occupy Wall Street protesters from Zuccotti Park, along with several laptops, storage bins, shelving, and assorted tables and chairs used in the library. Also lost is the library tent, which was donated by rock star and author Patti Smith.
Nonetheless, the OWSL reopened last night with approximately 100 books as Occupy participants who returned to the park. As of 7 a.m. today, the People’s Library collection was sparse—but available. Donations continue to be accepted at: Occupy Wall Street, Attn: The People’s Library, 118A Fulton St. #205, New York, NY 10038. 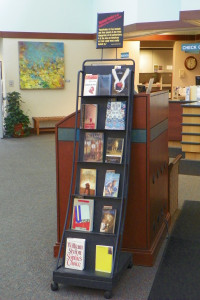 Grassroots Advocacy: Putting Yourself Out There