The Once and Future Library

An architect’s perspective on designing for changing constituencies

To some librarians it must seem like a perfect storm: Budgets are being slashed, ebooks suddenly are outselling their print ancestors, electronic movies on demand are slowing over-the-counter DVD lending, and the general public can find answers to their basic reference-oriented questions online. In what history may well mark as an important milestone in how we live and learn, Amazon and the Association of American Publishers reported in spring 2011 that ebook sales had surpassed print for the first time. The former grew by triple-digit percentages from February 2010 to the same month this past year; the latter declined 25% in the same period.

Besides librarians, architects are among the people most concerned about how, and how rapidly, such trends play out. Plans made a year ago for library additions or even modest renovations—never mind an entirely new building—are probably out of date. Longstanding formulas to calculate the space required for stacks, seating, and even computer stations no longer apply. The library standards codified in many states, often a criterion for funding, would probably result in a library design that is larger than necessary, or certainly too big or too small in all the wrong places.

Change may be inevitable, but it will not be uniform. For example, a public library I am working with reports its current monthly ebook circulation at a few hundred—versus 5,000+ paper editions. That’s less than 5% of the total. At the other end of the spectrum, Stanford University’s new Engineering Library made headlines in 2010 when officials proclaimed their intent to go “largely bookless” within the decade. Pared down by nearly two-thirds from the old facility’s size to a mere 6,000 square feet, the new library contains 16,500 physical books, a whopping decrease of more than 80%, while it holds 40,000 ebooks. Still, the culled books and periodicals didn’t disappear: They were carted off to a central university repository, which can provide any requested materials in less than a day.

Elsewhere in academia, some colleges and universities are bringing the library closer to the user by establishing satellite branches, or learning commons, right in dormitories, and even embedding librarians in various subject departments to help students access information.

So how do architects design libraries nowadays? They do it with humility and factor in the nature of the institution and its constituencies. Built-in flexibility in how spaces can be used now and reconfigured in the future is paramount. Thankfully, libraries have been migrating away from a reliance solely on books—and quietude—for years. The old model of one big room with a Queen Mary–sized circulation/reference desk and stacks in the back, while perhaps a fond memory for some, has long been passé. Where once the sheer number of volumes afforded status, today the important statistics are how many pertinent and engaging services and programs are offered and how many rooms, sociable niches, intimate nooks, and computer crannies are available for people to meet in, do their taxes online, collaborate, learn how to operate an e-reader, hold a book club session, gossip, have a cup of coffee, navigate the Medicare bureaucracy (with a librarian’s help), record music, write and read poetry, and on and on.

What are we looking at? In general terms, there will be more, varied spaces but probably less overall square footage, fewer physical books, and more services. Compact, efficient libraries can be a good thing for patrons as users and taxpayers. A public library addition that I am working on has shrunk from more than 40,000 square feet (based on a nearly decade-old plan that projected the book and VHS tape collections would continue to grow linearly) to less than 20,000 square feet—most of which is dedicated to children and young people. Space for this constituency is actually on the rise in many public libraries.

Here’s another recent example: A client library in an academic setting is systematically removing some stack space to make room for computer carrels and seating. Consequently, the lighting will have to be changed. If those stacks were built today, the lighting, as well as the space, would be designed for multiple uses. In fact, at the Health Sciences Library at the University of Colorado in Denver, completed in 2005, we did just that. There, stack lighting is diffuse and indirect, and therefore suitable for other potential uses—because medical research materials are especially susceptible to rapid obsolescence.

The best libraries today—old, new, or in design—are a cross between a modern community center, an old-fashioned YMCA, and a town center. At the crossroads of Quinnipiac University’s main quadrangle in Hamden, Connecticut, the Arnold Bernhard Library has been opened up, expanded, and reorganized like a village. There is a central square, meandering pathways lined with places for people to gather (to see and be seen), ample natural light, and a variety of sociable spaces to accommodate both team study and solitary contemplation. Building materials and detailing are intended to provide an uplifting sense of home and community, as well as a refuge on a busy campus. While it is vastly different than it was a decade ago, Quinnipiac’s main library is still very much the heart of the university, now socially as well as intellectually.

Knowing your customers and how to provide for them is a must today. To maintain their important role in a rapidly changing information environment, today’s public library staff members hold marketing meetings to better identify and serve their various constituencies, such as retiring baby boomers looking for activities, people to talk to, or second careers. The library in Essex, Connecticut, where our firm is located, is a prime example. It hosts myriad programs, including a popular series of illustrated architectural lectures that draw as many as 200 people per program.

Despite a lot of hand-wringing, the evolving library is holding its own and won’t be disappearing any decade soon. A 2011 study reports that 65% of adults said they had visited a library at least once in the past year (PDF file).  A 2010–2011 study conducted by the American Library Association’s Office for Research and Statistics and the University of Maryland reveals that, even though most public libraries reported flat or reduced operating budgets, 70% witnessed heavier use of computer workstations and 75% had increased Wi-Fi usage, while 90% offered patrons access to job databases and other online employment services.

I must confess, however, that owing to my beloved iPad and iPhone, I tend to remotely download ebooks and audiobooks. Consequently, I visit my hometown’s charming library much less these days; due to its very limited space, it doesn’t offer much in the way of the contemporary amenities touched on here. I am not entirely happy about this state of affairs, not only because I’m beginning to pine for the lively, engaging staff there, but also because my dear little library is precisely what libraries have long been, and not yet what they can be. Not yet….

CHARLES G. MUELLER, AIA, is a principal with Centerbrook Architects and also a member of the American Library Association. 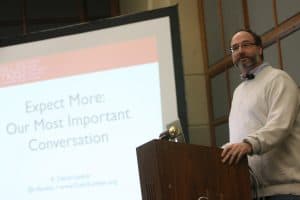 The Conversation Continues @ your library