A group of 3rd-graders from Brooklyn’s P.S. 399 watched Robert Louis Stevenson’s A Child’s Garden of Verses being printed on demand in bound paperback format March 7 at Brooklyn (N.Y.) Public Library’s Central branch. The children were invited to a ribbon-cutting ceremony to introduce the library’s new Espresso Book Machine, which can print more than 8 million titles in any language with the push of a button. In bringing the device online, BPL joins several dozen universities, public libraries, and bookstores around the world in offering the technology to their clientele.

“It’s the photocopier of the future,” librarian Rick Anderson said in the December 2011 issue of Wired. Anderson, who operates an Espresso Book Machine at the University of Utah, predicts the technology will become a “tabletop medium.” Of course, the size of the EBM 2.0 at present—5 feet tall and 7 feet wide—makes that impractical for the time being, to say nothing of the cost: BPL President and CEO Linda Johnson told the March 6 Wall Street Journal that EBM manufacturer On Demand Books quoted a price of $125,000 for the library to buy a machine outright. Because that was infeasible, the library and On Demand struck a deal in which the firm would install and operate the EBM at no cost to BPL, and charge patrons for printing out a book (suggested retail price for in-copyright titles and $8.99 minimum for a public-domain work of 40 pages, up to $23.99 for an 830-page out-of-copyright book—the maximum size the EBM can handle).

EBM accesses the majority of its catalog from public-domain titles digitized by the Google Books Project. Some copyrighted titles are made available for sale by publishers such as HarperCollins, Simon & Schuster, McGraw-Hill, Hachette, Macmillan, O’Reilly, and university presses. What made the technology particularly attractive to Johnson, however, is that it enables self-publishing authors to see their book printed at the library and added to the EBM database—albeit at a cost that averages $149 for formatting and design advice, a proof copy, and one upload of revisions. Additionally, the ability to print a book in any language would naturally appeal to libraries such as BPL, which serves a diverse population that speaks more than 130 languages and tends to live in non-English speaking households.

“What it means to be a great library is up in the air right now,” Johnson told WSJ. “Reflecting the community that you serve is really how you become great.”

The Once and Future Library

An architect’s perspective on designing for changing constituencies 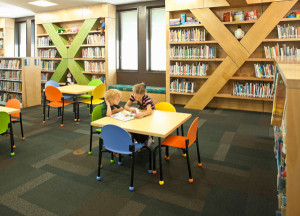