The Library as Lifeline: Getting Past Superstorm Sandy

How Queens Library is stepping up in the Rockaways

Library workers know that public libraries provide essential services. We live it every day. Until Hurricane Sandy wreaked havoc on tens of thousands in New York and New Jersey in October 2012, we at Queens Library didn’t realize how pivotal our role is in our communities.

As the extent of the damage became apparent, so did the obvious need for authoritative information. People did not know where to get a prescription filled when their pharmacy was destroyed, or how to apply for emergency benefits when they were without a phone or internet access. They were worried about their jobs and their children’s shuttered schools. Although four of our libraries were destroyed, Queens Library staff jumped into the breach and did what library staff does best: We gave out reference resources and created a sense of community, even though many of the staff were storm victims themselves.

Far Rockaway to the rescue

When Sharon Anderson, manager of Queens Library’s Far Rockaway branch, awoke the morning after Sandy struck [October 30] and found that her home without power or telecommunications, she shrugged. It was not unusual after a storm and she anticipated everything would be restored in a few hours. But the next day, things still had not improved. “There were lines backed up at the few stores that were open, and they were double charging,” she recalls. “Nobody had supplies. Nobody had anything.” 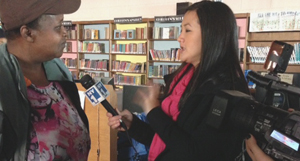 So it wasn’t surprising that residents approached Anderson for help when she went out on November 1 in search of supplies for her family. She was a familiar face to members of the community not just from the library, but because she attended meetings at the local police community council and the church. “People were asking, ‘Where can we go? What are we going to do?’“

Anderson called Queens Library administrators from the barbershop, which happened to have one of the few working phones in the entire neighborhood, to say that she was opening the Far Rockaway facility even though there was no heat or light. “And then—I just don’t know how—the word got out,” Anderson said. “People just started coming to the library. People pulled up with truckloads of supplies. They wanted to help out but they did not want to leave the supplies in the street. They wanted to leave it somewhere where it would be distributed. We started that Sunday [November 4] putting stuff in order. Church groups and synagogues came from all over. The Seventh Day Adventist Church distributed 2,000 hot meals from here in three days. This was the hub, this was the place.”

The library gave out bottled water, diapers, food, batteries, sympathy, fellowship. New York Cares distributed thousands of warm coats, and the library offered information about how to apply for emergency benefits. The Far Rockaway branch had no power for two weeks and was forced to close daily once the daylight waned. But early the next morning for 13 consecutive days without a break, Anderson, her staff, and volunteers reopened. Every night, she returned to her dark and cold home. “We felt we were better off being here than home, sitting in the dark. When I was here, I felt like I could help. I just didn’t think about anything else. When you see people who have lost everything, there is nothing in your mind but ‘How can I help them?’”

The Far Rockaway branch continues to host some outpatient service by visiting nurses whose medical facility was destroyed by the storm. Anderson is also working with the Joseph Addabbo Family Health Centers, a longstanding partner with Queens Library and other community health providers, to do programs on disaster-related health issues such as post-traumatic stress order. In such difficult circumstances, another feature of the partnership is particularly helpful to residents of the Rockaways: Queens Library staff can make primary care and mental health services appointments for their customers.

“The people here have got a long way to go,” Anderson said. As for her, she was one of the lucky ones: Her home regained power after 12 days, and the water damage it sustained can be repaired. But she still cannot bear to turn off her lights at night. “It’s like I’m afraid they will never come on again.”

Stuart Davis is a 21-year-old youth counselor at the Far Rockaway branch’s Library for Teens (situated several blocks from the branch itself). He lives in the neighborhood but was visiting a friend in Jersey City when Sandy hit, and came home to discover “about 4 feet of water in my house.” He estimates that he lost “about 90% of my clothes and my furniture in my room.” In addition, he said, “We had to take up the flooring in our house. We had no water, no heat, no electricity for about three weeks. It was pretty bad.”

After a few days, Stuart, who had no cellphone reception or computer access at his house, went to the Far Rockaway branch to get in contact with the outside world, as so many do after a natural disaster. When he discovered his colleagues had set up a relief effort, he joined right in. “I said, ‘Let me just do what I can for the people. My parents are at home doing what they can. These people out here really need our help and there’s no help out here.’”

As his fellow Rockaways residents came in to receive the donated food, water, and cleaning supplies, Stuart began to hear their stories. “There was one gentleman, who had his wife and I believe four kids,” Davis says. “His home was pretty much demolished. He was sleeping in the train stations and had to take his family to work with him on the train.”

Stuart Davis’s friend Conrad Davis (no relation) is also a youth counselor at the Library for Teens. Conrad and his family have lived in the same house in the Rockaways for more than a decade. Like so many others in the community, they were left without power for more than two weeks. Additionally, Sandy demolished all their vehicles, and felled several trees outside their home. Nonetheless, when Conrad heard that the Far Rockaway branch was being turned into a relief center, he went in immediately. “It felt great to be a part of that,” he said. “I almost forgot that I was one of the victims too. I would go home and look at the cabinets and say, ‘Damn, I don’t have any food!’” 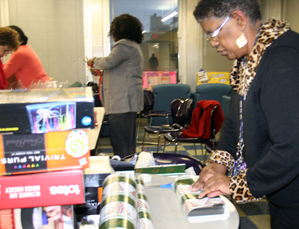 It will take more than a year for the Queens Library to rebuild at the Rockaways. In the meantime, Queens Library has established temporary outposts near the sites of the four library branches that Sandy destroyed, and the Far Rockaway branch and Mobile Library are offering seven-day-per-week service through the end of the year. As you’d expect, business is brisk.

“A library can operate in a modest building, but the community cannot operate without the library,” President and CEO Thomas Galante said in the December 21 New York Daily News. 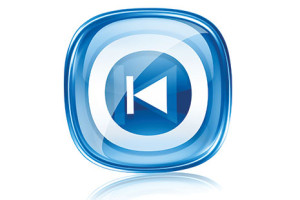