Even if your library has been around the social media block a few times, here are strategies to earn, build, and cash in on your library’s online reputation

During the Save Ohio Libraries movement in 2009, some libraries in Ohio jumped into Twitter. Undoubtedly, they saw it as another avenue for getting the word out about the imminent and catastrophic budget cuts being proposed by Ohio’s governor. However, two major factors prevented them from really using Twitter as an effective rallying tool.

The first was simply a lack of followers. Numbers are not the only criterion for social media success (and certainly not the most important one), but some followers are needed to spread a message. When an organization jumps into a social media tool during a crisis before having developed followers over time, there is a distinct lack of audience to hear any pleas for help.

The second was a lack of social capital. Social capital is what allows any organization or individual to make requests of its followers successfully. Think of social capital as funds in a sort of intangible bank account that you add to by listening to, engaging with, and doing favors for others. Each time you make a request, you are drawing on that account. If no social capital has been established from which to draw, actions requested of others are likely to be ignored.

Having social capital is, in many ways, equivalent to having credibility in a selected online community. Social capital can be earned only over time, by participating appropriately in the community.

How can your library go about earning the trust of its patrons online? There are several ways, and like all relationships, these methods require effort and time to develop. For most, a combination of the following actions will usually benefit a library’s online reputation.

Thank your patrons. When someone comments on your library blog, even if it’s just to agree, thank him or her. If the commenter says something negative, express appreciation for the feedback. It shows that your library is listening to all points of view and values constructive input. If someone posts something about the library to his or her Facebook page or retweets for your library on Twitter, acknowledge and thank that person. It’s an easy way to engage your patrons and promote positive feelings toward the library.

Ask for opinions. Ask for readers’ favorite Oprah Book Club pick or their favorite program at the library. Try asking for opinions on the worst book ever written. The more controversial the question, the more feedback it will likely get. Although generating controversy for its own sake may not be your library’s goal, facilitating conversation between the library and others is something you want. Be proactive and initiate exchanges of ideas and opinions on a variety of topics that interest your patrons on an ongoing basis.

Offer links to other sites of interest. Posting only links to your library’s assets (e.g., catalog, programs, or website) is just another method of self-promotion and not a form of engagement. Have you seen a funny video on YouTube? Pass the link along. Do the same for interesting blog posts and articles. Just make sure they are not written by anyone on your library staff or you may diminish the open forum you are trying to encourage.

Retweet your followers. If your library is on Twitter, the person who is responsible for the Twitter account should learn the syntax of retweeting and do so whenever and as often as possible. If one of your library’s followers says something that might be of interest to others, pass it along. Bear in mind that you may ask your followers to pass on something later to advocate for the library. Build up your social capital now so that you can ask for favors later.

Always give credit. This applies to all content, not just retweets. Do you want to promote a new program that was a patron’s idea? Name the patron and link directly to that person if you can. People want to be involved when they know their name is going to be promoted. This is another reason why photos of patrons at programs are a popular way to get people to visit a website. The library is an organization that cannot exist without its community, so be sure to acknowledge that community whenever and as often as possible.

Encourage feedback. One way that many people commonly use social media is as an outlet for venting their frustrations. This is the perfect opportunity for your library to hone its social media “voice.” If one of your library’s friends or followers is venting, expressing empathy can help forge a relationship. It can serve to show that your library is “human”—that real people who care work there. Additionally, it shows that the library is paying attention to its patrons, and its response can help them feel important and part of the community.

Ask people in your library’s network about items they post or follow up on something they posted earlier. In addition to asking, tell them about interesting things that happen at the library. This isn’t promoting a program—this is a more personal, less self-serving way to make a status update. Maybe you received a unique or interesting reference question? Post it, along with the answer. Pique people’s interest in what you do and what makes the library tick.

Provide information people care about. Online, your library needs to provide value to its friends and followers. If there’s information about something happening in your community, use your online channels to pass on that information. When promoting a library event, be sure your post answers the question “What’s in it for me?” for your followers. Advertising a service or program without promoting its benefits is counterproductive and can actually drain your library’s social capital.

Monitor and respond to posts. When someone says something about your library, whether positive or negative, it’s crucial to respond with something. Acknowledging the other person and demonstrating that your library is listening (and cares) is extremely important in building one-to-one relationships.

Bottom line: Every time your library directly engages with someone online in a positive way, especially one that benefits the other person, it gains social capital. Social capital takes time to earn and trust to build.

Once your library has been around the social media block a few times, it may be ready to move on to some bolder methods for gaining capital and strengthening relationships. Your library may want to try some of these strategies.

Post photos. Get an account on a Twitter-enabled service, such as Twitpic or Instagram, that allows you to post photos from anywhere and share them through your library’s Twitter account. Think about putting up not only photos of events or programs but also casual or funny shots of staff going about their daily work (or perhaps celebrating a staff birthday). Photos can also add to the “humanness” of the library online and add variety to what would normally be only a stream of text posts.

Provide good customer service. Social media, as a medium, is not always ideal for regular reference services. Chances are good that your library will occasionally encounter requests for help via social media, however. Some people prefer to communicate via Facebook or Twitter. Respect that these people want to communicate with the library and respond, as well as possible, using the same medium.

Promote contests. If your library runs contests, announce the winners via social media in addition to any other avenues you might use. Try a contest done entirely via social media, such as creating online videos or captioning a photo on Flickr.

Add social media URLs to business cards and signage. Nowadays, most libraries have their website URL included on their business cards, stationery, ads, and signs. Include your social media URLs in offline promotional materials as well. This acts as proof of social engagement, welcoming patrons to your online community and building trust in your library. Integrating online and offline advertising not only is common sense but also increases your library’s credibility in online social realms.

Create a viral experience. One of the best examples of viral marketing is described by the Twittown blog:

“When the San Francisco area’s most famous (er, only) Korean BBQ takeout truck rolls into the neighborhood, lines literally stretch around the block. But given the mobile nature of the business, how do people know when and where to find it? Enter Twitter. Kogi BBQ uses Twitter to let customers know where they are going to be each day, and if the photographs showing hundreds of people waiting in line for Korean BBQ to-go are any indicator, it’s a business strategy that has worked out incredibly well for them. The real-time nature of its business demands a real-time communications platform to underpin it, and Twitter (as well as Facebook) is the basis for that platform. Sandwich carts around the country should take note” (“Five Wickedly Clever Ways to Use Twitter,” Twittown, Oct. 26, 2009).

How many libraries have bookmobiles? This is a strategy that could easily be duplicated. Using social media or texting, the library could create real-time updates and commentary along the bookmobile’s route.

Bottom line: Participate in conversations. Remember that the recipients of any of your library’s messages have expectations of reciprocity.

Knowing that social capital should be spent only when necessary, you should ration it for only critical purposes. Promoting every program going on at your library will quickly run your social media account into overdraft status. Self-promotion is expensive. The Save Ohio Libraries campaign drew heavily on the social capital of a handful of individuals who were already well invested in social media communities. Advocacy is certainly one legitimate use for social capital. Some other worthwhile purposes include:

Yes, promote the library’s programs, but advertise just those that are high-profile or that you know are a great match for your social media audience.

Bottom line: Every time your library promotes something or asks for a favor, it is making a withdrawal. If your withdrawals exceed your deposits, your library effectively becomes a community leech—and in some cases, a pariah. Spend social capital wisely.

LAURA SOLOMON is library services manager for the Ohio Public Library Information Network. This article is an excerpt from her book The Librarian’s Nitty-Gritty Guide to Social Media (ALA Editions, 2013). Visit the ALA Store to purchase a copy. 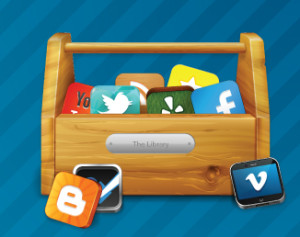 How Libraries Are Using Social Media