School was set to begin in Ferguson, Missouri, just days after the August 9 shooting death of unarmed black teenager Michael Brown by city police—an event that sparked protests, civil unrest, and a shutdown of the city.

After being informed that classes would be canceled, Carrie Pace, an art teacher at Ferguson’s Walnut Grove Elementary, wanted to do something, anything, to help with the recovery. While driving through town she passed the Ferguson Public Library. That’s where she got the idea to use the facility as a place for kids to go as a refuge from the chaos taking place outside.

Pace met with Ferguson Library Director Scott Bonner with the idea of setting up a makeshift school. She says her first meeting with Bonner was an emotional one: “I got out half a sentence before I was in tears.”

Bonner and company wasted no time in getting the word out that kids who wanted to learn could come to the library. Pace started out with a few emails about the library holding classes, and a handful of teachers and staffers stood outside the library with homemade signs that invited parents to bring their children.

The effort attracted about a dozen students on the first day, but within 24 hours newspapers and television stations began calling, and the effort went viral, Pace says. News reports and social networking efforts on Facebook and Twitter offered a positive story for reporters and a public relations opportunity for the library. On the second day, about 40 kids and 12 adults showed up to the library. By the end of the week, that number had ballooned to about 200 kids and dozens of adults, Pace says. So many people became involved, overflow from the library-turned-pop-up-school had to be housed at a nearby church.

Volunteer efforts and donations of books, supplies, and lunches for the kids started pouring it from individuals and organizations such as Teach for America, the Saint Louis Science Center, Operation Food Search, and the Missouri National Park Service. “There were so many volunteers (near the end of the week) we had to turn people away,” Pace says. 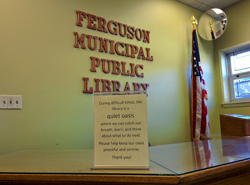 Bonner says before teachers started holding informal classes, the library had already posted a sign noting: “During difficult times, the library is a quiet oasis where we can catch our breath, learn, and think about what to do next.” The library also used social media to remind patrons that the facility is open to residents to come read, check email, and get water.

“We wanted to make the public aware that if it’s bad out there, you can still come in here,” Bonner tells American Libraries. “The oasis comment was a gentle reminder not to bring the trouble” into the library.

He says the library already provides shelter for residents when the temperatures become too extreme. Ferguson Library also was used as a crisis center in the aftermath of a tornado that hit the area a few years ago.

“If you can keep open and keep doing what you’re doing, you are going to be a safe haven,” Bonner says.

Libraries have served this function longer than people know, but social media has made it easier to get the word out about such efforts, he says. The media attention has resulted in a book drive, financial contributions, and other resources being sent to the library from across the country.

Gerald Brooks, president of the Missouri Library Association, says libraries in the state have been used as designated heating and cooling stations for 10 to 15 years now. He says the libraries in St. Louis are used as places of refuge at least twice a year.

The public perception of libraries is changing, he says, and patrons more and more are expecting them to offer more than just books.

“Ninety-nine percent of the money (for libraries) comes from taxpayers,” Brooks says. “They expect us to be there when they need us.”

TIMOTHY INKLEBARGER is a freelance reporter based in Chicago. 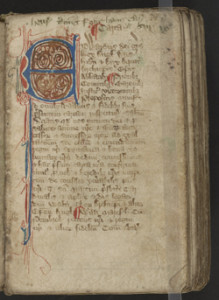 The Magna Carta Comes to America