In most American libraries, services to lesbian, gay, bisexual, and transgender (LGBT) people and questioning teens are woefully inadequate. While the LGBT community has made strides toward marriage equality, visibility, state and local protections, and other civil rights gains, our libraries have lagged behind in providing the services that LGBT people deserve.

LGBT librarians and the LGBT community are not responsible for making excellent library services happen. It is the responsibility of all of us who hold strong the values of librarianship: access, equity, intellectual freedom, and diversity.

LGBT patrons and their allies want their privacy protected from prying eyes (which libraries already do well); the ability to check out materials without comment or judgment; materials that are interesting, timely, and bought on-par with other subject matters; resources available in local branches without the need to order them from the far-flung reaches of the library galaxy; and programming to meet the needs of children, teens, adults, and families.

Further, LGBT patrons want all of these things without having to ask.

Many argue there are not enough LGBT people in a community to justify purchasing materials or providing specialized programming. After all, money is tight, and no one ever gets everything that they want. However, this ignores the size of the problem. According to a 2011 report from the Williams Institute at the University of California’s School of Law, LGBT people make up nearly 4% of the nation’s population or about 9 million, roughly the population of New Jersey.

To put this in perspective, a 2008 American Religious Identification Survey found that 3.9% of the US population belonged to non-Christian religions (i.e., Buddhism, Hinduism, Islam, etc.). Yet no one argues that religious minorities shouldn’t be served just because they’re less visible. Children under the age of 5 represent only 6.5% of the population, but few public libraries place storytime on the chopping block. Many subsets of the US population have less than 4% representation, but we would argue that few groups have a harder time receiving equitable library service than the LGBT community.

Because the LGBT population is an “invisible” minority, it’s easy for libraries not to buy materials and it’s even easier not to provide programming. Librarians fearlessly espouse the values of intellectual freedom, but many may be wary of a censorship battle. One must understand that self-censorship is alive and well in America. Any librarian who has survived a challenge to controversial materials, such as picture books that show same-sex parents, will say it was worth the time, effort, and community engagement.

Even in places with LGBT materials and services, libraries frequently take a passive stance. They don’t intentionally exclude LGBT items from displays, but they do not prominently promote these materials within the library. Over time, this disenfranchisement of a diverse group in our communities diminishes us all.

These practices lead to a very real chilling effect resulting, in part, from fear of censorship, lack of adequate funding, management intimidation (either in the library or “above”), or self-censorship.

Of course, these service holes don’t exist in every library or librarian. But it is mostly larger, urban, and/or academic libraries that succeed at trying to adequately serve LGBT populations. In rural areas, small public libraries, and school libraries, LGBT issues often get overlooked.

We must serve everyone who lives, works, and learns in our communities, and all librarians should be LGBT allies. This requires making an effort to provide equal service to all, no matter who your patrons are—or whom they love.

ANN K. SYMONS is the current chair of ALA GLBT Roundtable, recipient of the 2014 ALA Equality Award, and 1998–1999 ALA President. JOHN “MACK” FREEMAN chairs the GLBTRT News Committee, is the 2014 recipient of the Freedom to Read Foundation Gordon M. Conable Conference Scholarship, and is a 2015 ALA Emerging Leader. 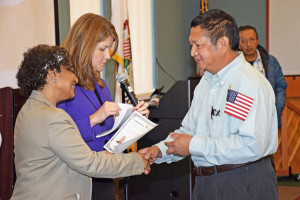 Students—and teachers—find library citizenship program has much to offer