If Carla Hayden is confirmed, the new Librarian of Congress could breathe fresh air into the profession

That sirocco you felt whizzing across the countryside a while ago wasn’t just an early promise of spring. It was the collective relieved sigh of a large chunk of the library world at the news that President Obama planned to nominate Carla Hayden to be the next Librarian of Congress. “Thank God,” you could almost hear in the wind, “he picked one of us.”

Indeed he did. A lot of names were circulating, of people who would be great and a few that made my hair stand on end. Mercifully, we don’t have to contemplate a future with a Librarian of Congress with just a background in business or technology—though as director of a major urban public library, Hayden has a background in business and technology, and much more—or Yet Another Historian. She’d be the first professionally trained and experienced librarian in the post in more than 40 years.

Now we have it. He picked one of us. Assuming she survives the confirmation process, for which she must have a stronger constitution than I do. The prospect of cozying up to some of the more reptilian members of the Senate is enough to turn anybody’s stomach. (“Why, yes, Sen. Beauzeau, I think we could indeed explore expanding the coloring-book collection.”) Or whatever. Gulp.

In a sense, Hayden’s new role won’t be that different than her previous ones, or of anybody’s for that matter: demonstrating the value of libraries and librarians to their communities and clienteles through the work they do and the connections they make, every single day. She’ll just now get to do that on a much grander scale.

There is also now tremendous opportunity for recruitment to the profession. The vision of a strong, dedicated, experienced woman of color in this role will signal to young people of all kinds that they too can find themselves, and a place to do important work, in our profession. I hope ALA and my colleagues in the LIS education world take full advantage of that.

No doubt there will be decisions and ideas that rankle or confuse us, but it is incumbent on librarians to give Hayden our vocal and public support.

So yes, the nation’s chief librarian will once again be a librarian. Whew. Now the hard part begins. As Librarian, she will be the face and voice not only of the Library of Congress but of us all, of librarianship, in the halls of government and in other important venues as well, from copyright to the digital future to cultural heritage and preservation and many more besides. As such, the burden of expectations will be great and the stakes very high for one of the great cultural institutions of the world—and also for us. Hayden’s performance as Librarian will reflect, in modest though meaningful ways, on our profession and our institutions.

She will stand for us, and thus I believe we need to stand up for her as well. No doubt there will be decisions and ideas that rankle or confuse, and at least an occasional misstep or even outright blunder (not that I’d know anything about those). But I think it is incumbent on us to give her at least the benefit of the doubt, and wholehearted and vocal and public support whenever possible.

I don’t know Hayden that well personally; we’ve met a few times, and her record at Enoch Pratt, Chicago Public, and ALA speaks for itself. I wish her Godspeed and fair winds on her new and exciting adventure. She’s going to need all the help she can get … but that’s another story. 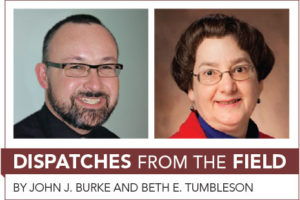 A tool for the embedded librarian