Libraries and their social context

Recently, I had the chance to re-re-read one of my intellectual heroes, Jesse Shera. He’s probably most closely associated with the origins of social epistemology, the study of what a society knows and how that knowledge is constructed, an idea I first ran across in graduate school and which has stayed with me ever since. If that sounds abstruse, consider for a moment the many differences between Wikipedia and the Encyclopedia Britannica, how they came about, and what their implications have been. Both are attempts to capture what we know, though of course with diametrically opposite approaches. Not to mention they represent different engagements with both the “we” and the “know,” which lead to different outcomes, demonstrating yet again that how knowledge—or society—is constructed matters greatly and sometimes can be quite untidy.

Anyway, in the chapter on the library and society from Shera’s 1976 textbook Introduction to Library Science, he writes in the first paragraph: “It is axiomatic … that the library as a social instrumentality, is, as it has always been, conditioned and shaped by the social milieu within which it functions” (emphasis mine).

Fair enough. If Shera is right, what is the societal end for which the library is a means? “The mid–19th century leaders of the movement for public libraries were well aware that they were implementing one of the greatest organizational changes in the human adventure—the attempt to qualify an entire population to participate in the control of the political and economic system in which they lived.”

In other words, democracy. Here we find, in somewhat circumlocutory prose, the library-as-bulwark-of-democracy argument in its purest form, with the bonus of connecting the dots and couching it in somewhat more elaborate thinking.

This is the gospel according to Dewey and Carnegie and Green and Jewett and Winsor. If you’re paying close attention, those are all men of some means who felt, supported in large part by the then-current societal mindset, that providing worthy and elevating books to the lower classes would make them better people. Dewey called this the “library faith,” and Wayne A. Wiegand has written eloquently on how that faith calcified into tunnel vision (see “Tunnel Vision and Blind Spots: What the Past Tells Us about the Present; Reflections on the 20th Century History of American Librarianship,” The Library Quarterly vol. 69, no. 1). The modern verse of this gospel goes something like, “Let’s give computers to poor people/students/developing countries and that will solve the digital divide and improve learning,” and so on.

The other, somewhat subtler point Shera makes is that you can’t remove libraries from their social context (he’s writing about public libraries, but you can say the same for any type); as societies have moved on, the aims and goals of and for libraries have shifted, too, but they remain instrumentalities. Not just good ideas, not just nice to have, but means to ends, and as those societies evolve, so might the goals and means. Food for thought.

I continue to marvel at the breadth and depth of Shera’s writing and thinking, and while there are some bits that can sound odd to modern ears, by and large he often provides insight or at least another way of thinking about stuff. And as for the whole “democracy” thing, this is not an altogether terrible goal—as we have all recently been vividly reminded, democracy is often a messy and unattractive business, and it’s so much better when everybody playing is better informed … but that’s another story.

JOSEPH JANES is associate professor at the Information School of the University of Washington in Seattle and creator of the Documents That Changed the World podcast. 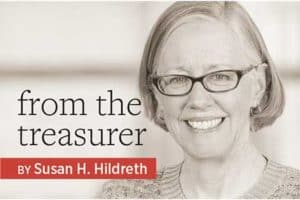 A Look at ALA’s Finances

The Association's budgets reviewed and approved