Mary Hall was walking through the library recently when she saw a familiar sight: a toddler having a meltdown while waiting in the checkout line.

Thankfully, Hall, assistant director of the Bedford (Ind.) Public Library, had an ally she knew could come to the rescue: Bridget, a beautiful Golden Retriever therapy dog waiting in her office.

“When she told him [about the dog], he stopped crying immediately and got up from the floor where he had been lying face down,” says Hall. “The whole family came to my office doorway to meet Bridget. The little boy grinned while he felt her soft ears and told his baby sister to pet her, too.”

Bridget is an active part of the library community in Bedford. Since she loves children, Bridget, who belongs to Hall, is a regular library visitor and helps out at library programs, including a weekly trip to 3rd grade classrooms, where kids can read stories to her.

While most people love Bridget, Hall is aware that not everyone loves dogs.

“I try to give people space as we pass by and watch for body language that would indicate fear,” says Hall. “We have not had anyone who had a dramatic fear reaction, and allergies have not been an issue.”

A Guide to Animals in Your Library

There are three different categories of animals you might see in your library, and it’s important to know the differences, says Katherine Schneider, longtime library volunteer. Here’s a quick guide.

Service animal: A legal term covered by the ADA that describes an animal that is individually trained to perform disability-related tasks for a particular person.

Therapy animal: An animal that has taken classes and/or passed a test that shows it is well-behaved and calm around a variety of people in a variety of situations, such as in nursing homes or schools. It does not have a legal standing, and standards for training are not regulated.

When issues do arise with such animals in public spaces, they can often be easily resolved, agrees Katherine Schneider. Blind since birth, Schneider uses her dog, Luna, to help her navigate the world independently. A retired professor at University of Wisconsin–Eau Claire and longtime volunteer for local libraries, Schneider says she doesn’t mind being thoughtful of people’s fears or allergies.

“A person I serve with on the library board is highly fearful and possibly allergic to dogs. I just said, ‘Hey, why don’t I sit at the other end of the table?’,” says Schneider. “I gladly change seats if I’m seated next to someone on a plane with allergies or who doesn’t like dogs. Life is short. Why make anyone miserable?”

At the same time, Schneider says it’s reasonable to expect flexibility on the other side too.

“If I need to be using the accessible computer in the library and the person next to me is allergic, perhaps they could move,” says Schneider. “The person with a disability has a legal need, so if you’re allergic or if you’re fearful, is there some way that you can go elsewhere for 10 minutes while a person does what they need to do?”

Schneider knows her rights to have Luna with her and tries to educate others on what the law is, too.

“When somebody comes into a library and there’s a dog with them, the first thing you can ask is, ‘Is that a service dog?’ Because sometimes it’s obvious, but sometimes not so much. If they say yes, you can say, ‘Tell me some jobs the animal does for you,’ ” says Schneider. “If they satisfy those questions, it has a legal right to be there, unless it’s out of control, and then you can ask the service dog to leave.”

Of course, Schneider says, some people abuse the law and pretend their animal is a service animal when it isn’t.

“You can buy a service dog vest online. Some people with invisible disabilities find a service dog vest useful so they don’t have to answer as many questions,” says Schneider. “Of course, anyone can buy one; some people use them to take their beloved pet anywhere they like.”

Beloved pets can be a problem at the Kansas State Library in Manhattan. Librarian Stephanie Kiersey has seen a few dogs in her library that were not quiet and well-behaved. Through a friend who trains service animals, Kiersey learned that Kansas law allows staffers to ask if the dog is a service animal and to see any verification the person might have for their dog.

Some people with invisible disabilities find a service dog vest useful so they don’t have to answer as many questions. Katherine Schneider, retired professor and longtime library volunteer

“Most of the time, when we ask if it is a service animal, they say yes. But when we ask to see verification, they can’t provide that,” says Kiersey. “We just say, ‘For future reference, if you could keep the letter on you and put a harness on your dog, please.’ We never have repeat offenders after we’ve talked to a person.”

Although Kansas law does allow a librarian, business owner, or other personnel to ask for verification, federal Americans with Disabilities Act (ADA) law does not allow this practice. The ADA only permits someone to ask if a dog is a service animal and about the jobs it does for the person, not ask for a certificate or letter.

One student was permitted in the Kansas State Library with an emotional support dog, but the library was notified ahead of time that the dog would accompany him.

“That dog had a harness on, and he was very well-behaved,” said Kiersey. “The student also tended to come to the library during non-busy times, so it didn’t create any problems.”

It’s important for library directors to know the legal differences between service dogs, therapy dogs, and emotional support dogs and to be thoughtful about using dogs in library settings, says Schneider.

“It might be helpful to do a book display about service animals and therapy animals,” she says. “If you’re having a therapy dog in the library for a program, make sure you clearly label that program. As long as you label it, then people get what they came for.”

As long as people are thoughtful, Schneider says, animals can coexist peacefully with library patrons and even provide joy.

“In a lot of university libraries, during midterms and finals they have therapy dogs come for their students. My guide dog moonlights as a therapy dog in that situation,” says Schneider. “Hundreds of college students will stop by to roll around on the floor with a dog! It’s a wonderful thing.” 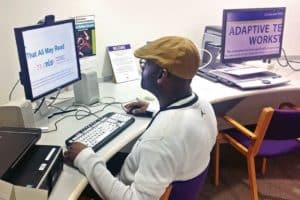