Awareness of each moment helps librarians stay serene under stress

In tiny Luck, Wisconsin, the public library doesn’t officially open on weekdays till 11 a.m. But on Fridays, patrons begin to drift in just after 10. They’re coming for the weekly mindfulness hour, hosted by staff member Colleen Allen.

Participants sit in comfortable chairs arranged in a circle, and Allen sounds a low bell to begin. Overhead, sunlight sifts through the double windows as the meditators silently listen to the sounds of the bell and their own in-breaths and out-breaths. Then, while a recording of a meditation by Zen Buddhist monk Thich Nhat Hanh plays, the group spends the next half hour practicing peaceful awareness of the present moment.

Allen has come to rely on mindfulness practice to stay focused and calm throughout her workday. Even in this quiet little community, her inner peace can be challenged daily by a barrage of interruptions, such as unsupervised children, computer glitches, and impatient patrons.

By practicing mindful breathing as she works, “I am less reactive and agitated and better able to respond with clarity and kindness,” says Allen, who began meditating 20 years ago. She says the practice helps her feel more in control of her circumstances: “Being able to stay focused on one particular thing [such as your breathing] when you’re dealing with 10 other things can help you attend to each of them without getting anxious or stressing about deadlines.”

Across the country, mindfulness is helping workers relieve on-the-job stress and improve workplace relationships. But what is mindfulness, and what are its benefits for librarians?

The American Psychological Association defines mindfulness as “moment-to-moment awareness of one’s experience without judgment.” Mindfulness practitioners use meditation and breathing exercises to pay attention to the present moment, without letting distractions, worries, and opinions creep in. The idea is that by learning to neither dwell on the past nor fret about the future, your mind can find peace.

One common mindfulness exercise entails holding an everyday object such as a raisin or coin in your hand and spending several minutes examining it in detail. This dedicated focus can help train the brain to tune out distractions. In another exercise, meditators sit quietly and concentrate on their breathing, noticing each inhale and exhale and letting awareness of everything else fall away.

Some mindfulness practitioners take part in meditation groups similar to Allen’s. Others practice solo, often with the aid of books such as Mindfulness for Beginners (Sounds True, 2016) by Jon Kabat-Zinn, founder of the Stress Reduction Clinic and the Center for Mindfulness in Medicine, Health Care, and Society at the University of Massachusetts Medical School.

Regardless of the method, mindfulness’s benefits are real. One recent study published in the Journal of Psychosomatic Research found that among people with generalized anxiety disorder, participation in mindfulness meditation was associated with a significant decrease in days of work missed as well as fewer visits to mental-health professionals. Another, from the French psychiatry journal ­L’Encéphale, found that mindfulness practice helped reduce chronic insomnia among patients 18–75.

Stress in the library

Think of stressful occupations most likely to benefit from mindfulness practice, and you might think of “air-traffic controller,” “taxi driver,” or “floor trader.” But as librarians well know, they too can experience significant job-related tension.

As Kathleen Clauson writes in Job Stress and the Librarian: Coping Strategies from the Professionals (McFarland, 2013), people typically think of libraries as low-key, stress-free places—but that image doesn’t reflect the “behind-the-scenes drama” that can, at its worst, include gossiping, bullying, backstabbing, favoritism, “punishing the creative,” and “promoting the incompetent.”

Last year, a study reported in the December 2016 issue of College & Research Libraries News showed that overall workload was the highest-ranking stressor for the 629 academic, public, and school librarians who responded. Comments centered around a theme: “Not enough time; not enough staff.” Other stressful work factors included difficult coworkers, instructional overload, and rude patrons.

For beginners, guided meditations are often an attractive starting point; plenty are available online or through apps. But during the workday, it’s often more convenient to take a few moments and do this simple breathing exercise.

Exposure to stressors such as these can contribute not only to job dissatisfaction but also to serious health problems, particularly heart disease. For example, a 2015 review of 27 studies involving more than 600,000 participants in Europe, the United States, and Japan found that people exposed to stressors such as job strain and long working hours were 10%–40% more likely to experience coronary heart disease and stroke. The review, published in the journal Current Cardiology Reports, found an additional association between work stressors and type II diabetes.

There’s no such thing as a stress-free job, of course. But mindfulness can help by giving librarians the ability to handle stressful situations better through enhanced focus and improved relationship skills.

Many librarians feel that they are spread increasingly thin on the job, yet their performance often depends on their ability to maintain focus amid a flurry of responsibilities. That’s something with which mindfulness can help.

One 2011 study published in the Brain Research Bulletin demonstrated, for example, that mindful meditation helps practitioners focus their attention and tune out distractions. After the study’s participants completed eight weeks of meditation training, they tested significantly better than nonmeditators at regulating a brain wave crucial to screening out unwanted information.

Lisa Moniz is coauthor of The Mindful Librarian: Connecting the Practice of Mindfulness to Librarianship (Chandos, 2015) and a school library media specialist at Union County (N.C.) Public Schools. Mindfulness practice, she says, helped her through “the most stressful work situation I had ever encountered,” namely, serving as media coordinator for 550 students in a high-poverty school district. As if her position wasn’t demanding enough, the district then laid off her assistant.

“I was used to running a dynamic media program, including staff development for the teachers,” she says. “And when you lose a full-time support person, you’re going to have to make some adjustments. I was in a constant state of frustration.”

Practicing mindfulness “didn’t relieve all my stress, but it helped me cope by giving me a new awareness of my situation, so I could objectively see what I could change and what I couldn’t,” she says. That focus helped her set professional goals for herself, which led to a promotion to her current job. She enjoys more support now and credits her mindfulness practice for her improved circumstances and professional growth. “I’m much more calm, self-confident, and focused now,” she says.

Mindfulness can also reduce workplace stress in a different way: by helping practitioners improve their relationships through greater empathy.

Kenley Neufeld, dean of the Luria Library at Santa Barbara (Calif.) City College, attributes much of his professional success to mindfulness, which he began practicing more than 20 years ago.

“Over the years, I believe that my mindfulness practice has transformed the way that I work and made me a better manager, more aware of my students,” says Neufeld. “It has allowed me to move through the ranks of our campus because I’ve been able to cultivate a deeper ability to listen and communicate.”

There is scientific evidence pointing to a link between mindfulness practice and increased empathy. For example, one 2011 study published in Psychiatry Research: Neuroimaging found that eight weeks of mindfulness training increased the density
of gray matter in the brain region associated with empathy.

Neufeld uses his ability to listen and empathize to help defuse difficult interactions. When he’s involved in a confrontation, he practices mindful breathing to stay calm. “The other person doesn’t know I’m doing that,” he says. “When we communicate, we’re often not fully present; we’re thinking about how to respond—how that person is wrong. Rather than focusing on those things, I can use my breath to really listen at that moment.”

It’s important to note that, while mindfulness can help you cope in stressful situations, it won’t necessarily alleviate the circumstances that caused the stress. To do that, Neufeld recommends following up with a period of reflection.

“Say I’ve been angry with a colleague, and I say something inappropriate. In a work setting, we can ignore it, or we can acknowledge it and work to reconcile with the person,” says Neufeld. He uses mindful breathing to examine the experience later and look at it in a calmer way.

“In the academic arena, one of the huge stressors is working with faculty who do not respect your time or expertise,” she says. She recalls one incident when a colleague wanted her to take over his class for three periods to teach information literacy, but he had no assignment to help guide her lesson plans and instruction. Reale listened calmly and politely said no, worried she’d be wasting the students’ time.

Later, reflecting on how she might have handled the situation differently, Reale realized she could have proposed her own assignment to the professor, asking the students to compile an annotated bibliography. The experience allowed her to develop a productive solution for responding to future requests.

Those interested in learning more about mindfulness meditation can explore a variety of resources. Titles to look for include Calming Your Anxious Mind by Jeffrey Brantley (New Harbinger, 2003); The Miracle of Mindfulness, by Thich Nhat Hanh (Beacon Press, 1999); and Mindfulness: An Eight-Week Plan for Finding Peace in a Frantic World, by Mark Williams and Danny Penman (Rodale, 2012). Among the mindfulness-related apps available are Headspace; Calm; buddhify; and Stop, Breathe & Think, all available for iOS or Android.

Online resources are available, too. The Center for Mindfulness at the University of Massachusetts Medical School offers an eight-week course via video conference, while the UCLA Mindful Awareness Research Center offers a six-week, self-paced, prerecorded course with optional live chats. Those looking for a lower-commitment option might try one of the many guided meditations offered on YouTube, such as those led by meditation teachers Tara Brach or Kim Eng. There’s also a “Mindfulness for Librarians” Facebook group.

For Allen, one of the most appealing aspects of the practice is its portability. She doesn’t need any equipment, and she can practice any time, any place, because her breath is always with her. “I don’t even need a pillow, just myself. That is something I can manage not to forget,” she says with a smile.

Author Moniz also meditates spontaneously, sometimes using the Calm app on her phone. As with other activities, the benefits of mindfulness accrue with practice, she says. But unlike an exercise class, there’s no guilt if you miss a day. In fact, guilt is not allowed in mindful meditation. Whenever any worry or criticism enters your thoughts, whether it’s about yourself or someone else, Moniz says to simply acknowledge it the way a neutral observer would: “Oh, there’s another one.” Then let it go. “It gets easier,” she says.

ELLYN RUHLMANN is a freelance writer and an adjunct English instructor at the College of Lake County in Grayslake, Illinois. 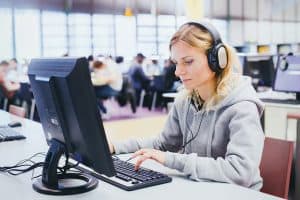 Library Websites for All

Improving the experience for patrons with visual impairments