Libraries planning for resettlement and integration of refugees

We are in the midst of the largest global migration since World War II. Sixty-five million people have been displaced worldwide, including more than 21 million considered refugees by the United Nations Refugee Agency (UNHCR). Images of refugees from Syria and various African countries risking their lives to escape to Europe flash across television and computer screens across the world. What has been less visible is the work that community anchors, individuals, and nonprofit organizations accomplish to assist new refugees and asylum seekers. Libraries worldwide play a significant role in welcoming and assisting these people.

Since 1975 the United States has accepted more than 3 million refugees. Despite current restrictions, more than 45,000 arrived between October 2016 and June 2017. The American Library Association (ALA) recognizes America’s immigrants as strong and valuable members of the social fabric of this nation, and the Library Bill of Rights states that a person’s right to use a library should not be denied or abridged because of origin, age, background, or views.

Project Welcome is a joint effort by ALA and the Mortenson Center for International Library Programs at University of Illinois at Urbana-Champaign. Two ALA offices were involved in the project: the International Relations Office and the Office for Diversity, Literacy, and Outreach Services. The project was made possible with funding from the Institute of Museum and Library Services.

Project Welcome is developing recommendations and an action agenda for libraries on information resources, services, training, and research needed to support the resettlement and integration of refugees and asylum seekers in the US. The project assesses current capacities and gaps in services by learning from others, including international colleagues and international and national governmental agencies.

The underlying principle of Project Welcome is that all are welcomed by and in libraries. Armed with an informed and strategic plan that includes the voices of refugees and asylum seekers, Project Welcome will strengthen the collective impact of libraries, community anchors, and refugee agencies to support resettlement and integration.

From May 2016 to January 2017, ALA and Mortenson Center staffers organized webinars, Twitter sessions, and in-person opportunities at conferences and meetings to share information about Project Welcome. The sessions helped to identify a focus and presenters for the Project Welcome Summit held on February 6 in Chicago.

Seventy participants from the library community, UNHCR, refugee settlement organizations, and national and state-level refugee coordinators participated in the summit. This was the first national event that brought members of the library community together with those from the refugee service community. The summit could not have been held at a more apropos moment, as President Trump’s first executive order preventing refugees from entering the US for 120 days and immigrants from seven predominantly Muslim nations from entering for 90 days had just been halted by a federal judge.

Learning from libraries outside the US

The summit began by looking outward to gather insight and perspectives from librarians in countries that have received large numbers of refugees to see how they assist the newcomers to their communities. Sulekha Sathi, library service manager for the Agincourt branch of Toronto Public Library, and Anne Barckow, manager of the department of intercultural services, languages, and education, at Hamburg Central Library in Germany, provided insights for their colleagues in the US.

Fifty-one percent of Toronto residents were born outside of Canada, and nearly 40,000 refugees from Syria have arrived in Canada, many of them settling in Toronto. To help connect with the new Syrian refugees, Toronto Public Library staffers visit refugees at hotels and other temporary housing locations to welcome them. The library has also created an introduction video to the library in 10 languages, including Arabic.

Hamburg, the second largest city in Germany, currently has 50,000 refugees and asylum seekers. Most are from the Middle East and West Asia. The Hamburg library works closely with the city’s refugee office to help refugees settle, acclimate, and integrate. The library staff has implemented a working group for refugee projects. Among the many services the library provides are German-language classes called Dialog in Deutsch. The library also creates networking opportunities for refugees through group outings, exhibitions, and lectures.

The US as resettlement destination

The sharing of information and knowledge between the refugee service community and the library community was the most important part of the summit. Librarians need to know more about the refugee resettlement process and what support refugees receive from other organizations. Anne-Marie McGranaghan, UNHCR associate resettlement officer, provided an overview of how the agency’s global refugees program works. Ngoan Le, state refugee coordinator at the Illinois Bureau of Refugee and Immigrant Services, explained that in the 1980s and 1990s, refugees came from only a few countries—today’s refugees to the US come from more than 60 countries. Most of the librarians in the audience were unaware of how limited the US government support provided to refugees is. Reception and placement support lasts only 90 days. After that, refugees are essentially on their own.

A Refugee Becomes a Librarian

Touger Vang is programming and outreach librarian at Yolo County (Calif.) Library. He was of one of thousands of Hmong refugees who came to the US from Laos in the 1980s in the aftermath of the Vietnam War. Vang told his story about how the library became an important part of his new life. Choosing to become a librarian, he is now helping other refugees. He emphasized that each culture is different, and libraries need to work to understand them as well as possible when creating and delivering services. What may work for one community may not be as successful with another.

Presenters from resettlement agencies discussed the information needs of refugees and how libraries can help. These suggestions were familiar: books, including audiobooks in English and languages spoken by the refugees; computers; meeting spaces; English-language classes; job- and work-skills assistance; and guidance and orientation to community resources. And of course, a library card.

Summit collaborators are creating Project Welcome Guide: Public Libraries Serving Refugees, which will provide ideas and resources for public libraries to serve refugees and inform all community members on issues affecting refugees. The guide will have sections on how to become knowledgeable about refugees, collaborate and partner, create community awareness, and provide services.

An inclusive and sustainable approach is the cornerstone of the guide. Libraries don’t need to act alone. They can better serve and understand the needs of refugees by working with ethnic organizations and refugee community members. Project Welcome recommends an integrated service approach to address the needs of refugees and nonrefugees. This approach should strive to be multilingual and work with community engagement librarians; share information with relevant community organizations using email and diverse and appropriate media; and be inclusive, interactive, and engaging.

Kansas City reaches out to its immigrant population

Julie Robinson spent years working in community outreach as manager of Kansas City (Mo.) Public Library’s (KCPL) Irene H. Ruiz Biblioteca de las Americas branch in the city’s Westside neighborhood, which is home to a large immigrant population. Immigrants and refugees make up almost 7% of the city’s population. When KCPL created a new division of its outreach department in 2014 to engage this community, Robinson was a natural choice to lead the department.

In her new role as Refugee and Immigrant Services (RIS) manager, Robinson helps the library serve immigrants and refugees from Afghanistan, Democratic Republic of Congo, Iraq, Mexico, Myanmar, Somalia, Vietnam, and Central and South American countries. Robinson initially faced challenges connecting with people with limited or no English-speaking skills, so she partnered with resettlement agencies, medical facilities, Kansas City Public Schools, social service agencies, and community groups to gain access to these populations. An advisory board was established to help reach immigrants and refugees and guide the programming and outreach activities.

Robinson was joined by two AmeriCorps VISTA volunteers in July 2015 to improve services and programming. KCPL’s Immigrant Heritage series began with a lecture on the H-1B non-immigrant visa, which allows US employers to hire foreign workers in specialty occupations. That was followed by immigrant restaurateurs who showcased their food at a reception. The final event that first year was a panel discussion among immigrants who came to the US by different paths and for different reasons. A January 2016 screening of the documentary Refugee Kids: One Small School Takes on the World drew 325 people—half of them immigrants. The final event in November 2016 was a naturalization ceremony for 110 applicants who became US citizens before a standing-room-only crowd of more than 600 people.

After rebranding RIS to RISE (Refugee and Immigrant Services and Empowerment) to stress the library’s commitment to refugee and immigrant rights, Robinson and the AmeriCorps volunteers implemented citizenship classes at two KCPL branches, offered digital storytelling programs for immigrant teens, and hosted a #toimmigrantswithlove event where more than 1,100 people wrote welcoming postcards, listened to stories about the immigrant experience, and promoted the event on their social media accounts using the hashtag. They also provided cultural competency training for library staffers and created a video that is now part of new employee orientation at KCPL.

Looking forward, Robinson is working on a welcoming document to assist KCPL staff in ascertaining immigrants’ and refugees’ library needs. By 2018, KCPL will offer assistance to immigrants on their path to citizenship by having citizenship advocates in the library. 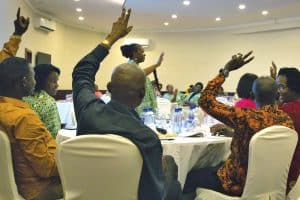 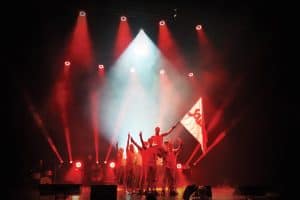 IFLA's 2017 WLIC steeped in history, looks to the future