Citing your source. Presenting information in a nonbiased way, with just the facts. Letting people make up their own mind, not telling them what to think.” When longtime freelance journalist Alison Peters was pondering a career change, she says the appeal of working in a library lay in the ways that she could use skills similar to those she had honed in her 12 years as a reporter.

Although the daily work of librarians and journalists differs, the vocations share many professional values. Brandy Zadrozny, who worked as a librarian for a decade before becoming a reporter and researcher for the Daily Beast and a reporter for NBC News, and Alice Crites, an MLIS-trained research editor whose work has helped earn six Pulitzers for The Washington Post, offer high-profile examples of the congruence between the two fields. But many librarians meld aspects of journalistic practice into their work.

Peters, who became an adult services librarian for Contra Costa County (Calif.) Library earlier this year, realized that full-time librarianship would allow her to put journalistic values and practices into everyday use. And she’d still get opportunities to write. Indeed, as a library and information science student at San José (Calif.) State University, Peters profiled librarian journalists for MediaShift. In a similar vein, from her first day as a librarian she has used her writing skills to inform patrons about the many services the library provides.

Another commonality between librarians and journalists is a shared belief in rigorous research. Librarians in all settings provide guidance about how to identify and create reliable sources of information. Journalists are adept at sifting through government records and other primary materials to tell accurate and compelling stories.

Samantha Slocum, digital and special collections librarian at Rapid City (S.Dak.) Public Library, serves as the library liaison and coordinator for the Black Hills Knowledge Network (BHKN), an online resource launched in 2009 that connects people to news and information in the Black Hills region in western South Dakota. BHKN’s original mission, Slocum says, was to provide resources for local leaders to make educated decisions, but that mission has now expanded to include building community and enhancing civic knowledge for residents in the region. The site features a news blog (often written by library staffers), databases of information about elected officials and community resources, local history, community profiles, and “issue hubs.”

BHKN’s issue hubs aggregate and synthesize information about topics important to the area, such as the history of the 1973 Wounded Knee Occupation, which occurred on the Pine Ridge Indian Reservation. The hub documents this critical moment in South Dakota’s history by organizing previously scattered information from academic journals, reference books, online databases, and contemporary news accounts. It contains two parts—a readable summary of the occupation, written similar to a news report, and numerous links to more resources, just as librarians have prepared for decades.

Slocum notes that it could take up to two months to prepare an issue hub, depending on the complexity of the topic, the number of sources to consult, and her other work. In her view, preparing the hubs complements the library’s mission of building collections and offering reference services. And in the end, “it actually saves us time,” she says, rather than researching resources from scratch whenever another patron asks a similar question.

In Weare, New Hampshire, librarian Michael Sullivan is also in the community-building business. Weare is a bedroom community of approximately 9,000 people, located near the larger cities of Concord, Manchester, and Nashua. In 2016 the owners of Weare’s only newspaper, a quarterly publication that operated more like a magazine than as a source of breaking news, closed the paper due to lack of ad revenue. At the time Sullivan had just begun his job as director of Weare Public Library. A resident approached Sullivan and asked, “What are you going to do about the paper?”

Sullivan responded by launching Weare in the World in 2017 as a “weekly production of the Weare Public Library.” The four-page newsletter is available every Wednesday and includes a calendar of events, library news and tips, coverage of town politics and personalities, and the crossword puzzle—the most popular feature, according to Sullivan. There are no ads. The key criterion for inclusion is some connection to Weare—either information about an event occurring within the town or something notable in which a Weare resident participates. “The goal is to build a sense of community,” Sullivan says.

Each issue costs $25 to produce and print, and Sullivan delivers them to 10 drop points around town—including restaurants, a bank, and a beauty parlor—himself. Sullivan says Weare in the World is for “people who do not use technology but still want to know about their town.” That said, a PDF of each issue is available to download from the website.

Now in its second year, the newsletter has already become popular. The library prints 250 copies a week, a number likely to rise as demand continues to climb. (There are also about 50 online readers.) Sullivan serves as editor and assembles content produced by other people, such as the town’s police chief or the events coordinator for the Rotary Club. The library has quickly become a clearinghouse for information about Weare’s social and cultural life. However, the new role comes with some trade-offs: Producing the paper on a weekly basis takes 8–15 hours, so Sullivan has had to shift some collection responsibilities to other members of his staff, and he puts on fewer programs at the library than he might have otherwise. But he keeps in mind that “public libraries have a long tradition of community outreach.” From his perspective, Weare in the World fits into that tradition perfectly.

Such examples of librarian journalism—Peters’s enthusiasm for promoting library services and her chronicling of librarian columnists, Slocum’s detailed and synthesized research about issues in her community, and Sullivan’s work on Weare in the World—have great merit. But none is focused on original reporting. Indeed, one of Sullivan’s goals for the newsletter is to hire a journalism student who can do the legwork that probes into the stories behind the submissions to the newsletter.

The reason librarians cannot do much original reporting is obvious: They are working in the library and can’t just leave to attend a city council hearing or report from the scene of a natural disaster.

This reality leads Tommy Thomason, director of the Texas Center for Community Journalism at Texas Christian University in Fort Worth, to distinguish between what he calls the two levels of journalism. The first is curating and vetting content for accuracy and serving as a center for useful information; most librarians already do this step. The second, says Thomason, is “go out and cover this” reporting, often at a moment’s notice. One of the biggest challenges news organizations face right now, in Thomason’s view, is that consumers are unable to easily distinguish accurate from inaccurate news content in their social media feeds. Because librarians place such a high value on accuracy, Thomason says he would welcome librarians who also wish to become ground-level reporters. He notes, though, that this would involve a “total reconceptualization” of the role of librarians.

Although the likelihood of many librarians becoming full-fledged newshounds is slim, there are some practices that all librarians could learn from journalists. Tom Huang, assistant managing editor for features and community engagement at The Dallas Morning News, points out that journalists are skilled at asking open-ended questions as well as being productively persistent if someone is not answering. While this may not be the best approach to a reference interview with a patron, librarians could use these techniques when speaking to skeptical public officials to advocate for the value of the library. Another skill that journalists have, Huang notes, is the ability to dive deep into public records and unearth data that may not be readily apparent. Librarians who are not as adept at this type of research could develop this expertise, and experienced journalists could be useful guides and partners.

“Journalists could learn a lot from librarians too. It’s a two-way street,” notes Huang. Huang has worked with librarians extensively over the last few years through the Storytellers without Borders program. This collaboration between the Dallas Public Library (DPL) and The Dallas Morning News trains local high school students to be reporters within their neighborhoods and also to conduct effective library research. Journalists provide the reporting training; librarians provide the research tips. Most of these activities occur at DPL.

Through this work, Huang has seen firsthand that librarians are in a position of great trust in their communities. According to a 2017 poll by the Knight Foundation and Gallup, only 33% of Americans have a positive view of the news media. Contrast that with an August 2017 Pew Research Center study that showed that 78% of Americans say that public libraries help them find trustworthy, reliable information.

To raise the trust level for journalists, Huang thinks that journalists and newsrooms could be more open and transparent about how they work. Just as the library is open to everyone, newsrooms could become much more accessible to a newspaper’s readers. Meanwhile, Huang appreciates that librarians can serve as trusted brokers to bring the expertise of journalists into the life of the library.

Laura Saunders, associate professor at Simmons College School of Library and Information Science in Boston, also recognizes the potential for collaboration between librarians and journalists. She is one of the conveners of the April 2018 “Know News” symposium at Simmons. At this symposium, journalists, librarians, and technologists developed strategies aimed at increasing public support for valid news-gathering, which includes awareness of how to identify inaccurate and misleading stories.

Symposium participants plan to release a white paper later this year with suggested next steps for promoting legitimate news. Like Sullivan, Saunders observes that librarians aim for “community building at a local level.” One model that holds promise for such community building, she says, are the nationwide People’s Supper events, which are structured conversations with people from different ideological perspectives, shared over a meal, to encourage respect and understanding. Saunders thinks that libraries would be a natural host for these suppers and that both librarians and journalists could use their expertise to make the conversations a success.

On a nuts-and-bolts level, librarians are experts in digital tagging and organization. Saunders attended a recent Knight Media Forum, where Raney Aronson-Rath, executive producer of PBS’s Frontline documentaries, talked about how the show worked with a digital archivist to organize its voluminous video files. This information expertise proved a boon to the efficiency of Frontline’s journalistic efforts and is an example of how librarians and archivists can support journalistic work behind the scenes. 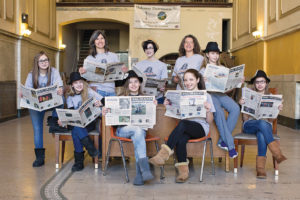