Cambria, a Wisconsin village with a population north of 700, doesn’t have a dry cleaners—but residents know if they need an item pressed, stitched, or altered, they can drop off their duds at Jane Morgan Memorial Library (JMML).

“Sandy’s willing to take a look at anything, from mending pants to replacing zippers to sewing buttons on a shirt or pants,” says Director Jennifer Tallman of Sandra Vardell (pictured), a former board member who volunteers one Saturday per month to tackle the town’s toughest tailoring.

JMML, at the suggestion of Vardell, started its garment care program in 2016 as a creative way to fundraise while filling a public need. “We have a really small, close-knit, rural community,” says Tallman, “and the sewing and the ironing was just one of the pieces we thought would be a nice addition for folks, rather than [them] having to drive some miles.”

Patrons are asked to donate what they think Vardell’s time and effort is worth, with most contributing $5–$20 per item. Tallman says the program, which runs on donated and borrowed equipment, has raised $400 and allowed JMML to purchase adult nonfiction titles it couldn’t otherwise afford.

Though Vardell is the sole seamster—in three years, a fur coat is “the only item she hasn’t been able to fix,” says Tallman—volunteers drive her to the library and staffers perform reference interviews for unloaded laundry. “We get as much detail as we can if they come on a day when Sandy is not here,” Tallman says. Patrons later pick up completed items at their convenience.

Thanks to word of mouth, JMML has seen an increase in sewing projects in the last six months. “The garment-care program has brought people into the library that didn’t know we existed,” says Tallman. “It stretches out those branches a little further to people you wouldn’t normally get.” 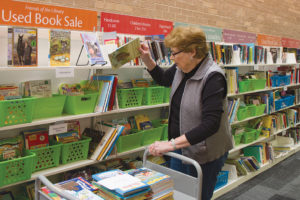 Cultivating a successful program requires time and effort, but the payoff can be worthwhile