Billions of dollars in population-based federal funding—for everything from Medicaid to school lunch programs to Library Services and Technology Act grants—hinges on next year’s census. That data also affects how congressional ­districts are determined and drawn, which in turn decides how many electoral college votes a state will have. The repercussions of next year’s count will echo for at least a decade, particularly for the country’s most vulnerable communities.

The 2020 Census kicks off next April. As always, some census takers will be out knocking on doors. But for the first time, people will also be able to complete the questionnaires online. Librarians can help provide space, equipment, and information to guide patrons through the process.

Conducting a fair and accurate count isn’t as easy as it may seem. Many areas of the country have populations that are difficult to count. And a controversial new citizenship question proposed by the Trump administration could suppress the response rate (see sidebar).

Getting a complete count

The American Library Association (ALA) and its local, state, and federal partners have led the way to prepare libraries for the count. On April 1, ALA President Loida Garcia-Febo joined US Census Bureau Director Steven Dillingham and other officials at a press conference to mark the one-year countdown to the census.

Citizenship and the Census

In March 2018, US Department of Commerce Secretary Wilbur Ross announced that the 2020 Census would ask whether respondents are US citizens. Ross, who argues that the question would help protect minority voting rights, nonetheless has testified to the Senate Appropriations Subcommittee that it could lead to a 1% undercount (representing more than 3 million people). In August, the American Library Association (ALA), along with more than 140 other organizations, signed a letter of opposition to the question. In addition, this past April ALA joined an amicus brief to the US Supreme Court opposing the question.

Larra Clark, deputy director of ALA’s Public Policy and Advocacy Office and deputy director of the Public Library Association, says that the proposed question raises new fears for achieving a complete count. “The Census Bureau is required by law to secure the data, which cannot be used against [respondents] by any government agency or court,” she says. But surveys have shown that immigrants and others do not have confidence that the information will remain private.

Oral arguments at the Supreme Court began April 23, and a decision is expected in June, when the census questionnaires are scheduled to be printed. Check The Scoop blog for updates.

“People from all walks of life come to libraries with questions, and we help them find answers,” Garcia-Febo said. She called the census a “tremendous opportunity to promote equity,” given that 99% of difficult-to-count areas—many of which are communities of color—are located within five miles of a public library. “Libraries are in inner-city schools, Hispanic-serving colleges, and remote tribal lands,” she said.

Garcia-Febo encouraged librarians to serve on Complete Count Committees, which bring together representatives from local, state, and tribal government; faith-based organizations; business associations; K–12 schools and universities; health care organizations; and other community groups to work to ensure accurate data. Assisting in the census can help libraries strengthen representation in their regions and provide an opportunity to demonstrate their value as they build relationships with local leaders.

“We want to make sure libraries are prepared and city, county, and state leaders understand the role libraries have played past and present,” says Larra Clark, deputy director of ALA’s Public Policy and Advocacy Office and deputy director of the Public Library Association. Clark says that in 2010, more than 6,000 libraries served as Census questionnaire assistance centers. “Every time we see a new government program or service online, we see people turning to the library to be connected,” she explains. As she points out, ALA’s new census guide includes timelines, resources, and frequently asked questions.

Some librarians already are joining Complete Count Committees, and some have created their own guides and plans for assisting. Erik Berman, coordinator of services to young adults at Alameda County (Calif.) Library, has been working with the California Library Association to release its census guide for libraries. “Our mandate is to position libraries as an essential resource for the 2020 Census,” he says. The guide includes marketing material to help get the word out, information about hard-to-count groups, and other tools, according to Berman. He added that some libraries are developing innovative ways to help facilitate the process. Los Angeles Public Library, for instance, is working with Los Angeles County to host Census Action Kiosks (designated computers where patrons can complete the census questionnaire, supervised by a trained volunteer or staff person).

Helen Poyer, director of the Cobb County (Ga.) Public Library System (CCPLS), says she and two of her staff members recently attended a census training event hosted by the Georgia Municipal Association. The library also is planning to hold a job fair for those seeking work as census takers; officials from the local census office will visit the library for job training and recruitment, Poyer says.

Data and the census

CCPLS is taking a data-driven approach reviewing past census data from areas that were undercounted in 2010. “So far, we’ve found that age is a big factor in participation rates, as well as income and ethnicity,” says Corey Stegall, CCPLS geographic information system (GIS) analytics assistant. CCPLS will use the information to map branches in relation to those areas. “If people can’t get to libraries to use our computers, we can go out into the community with laptops and [mobile Wi-Fi] hotspots,” he adds.

Montana State Library is taking a similar approach by providing geographic data to the Montana Census and Economic Information Center, which helps ensure the center has up-to-date address information for its own GIS. Montana State Librarian Jennie Stapp, who serves on ALA’s 2020 Census Library Outreach and Education Task Force, says the census is critical for low-population states like Montana, where residents number about 1 million. Such states receive more federal funding since they likely don’t have a tax base large enough to fund major projects. That makes a complete count even more important.
Stapp recommends that libraries across the country prepare for the online census by evaluating the broadband and hardware requirements necessary for it.

ALA’s 2020 Census Library Outreach and Education Task Force is supporting libraries as they plan for the count. Task Force Chair Tracy Strobel, deputy director of Cuyahoga County (Ohio) Public Library, says working on the census is an extension of what libraries already do to help less tech-savvy patrons with government forms. Some assistance may be as simple as showing patrons how to use a mouse or navigate between data fields in the online form, she says. She adds that the best thing library officials can do now is join Complete Count Committees: “It’s a double intention for advocacy for ourselves and advocacy for what we can do for others.”

The census is fast approaching, and ALA and partner organizations have developed resources to help libraries ensure an accurate count. Here are some steps librarians can take to prepare. 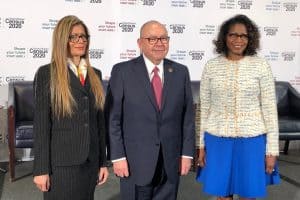 Help achieve a complete count in 2020