NPR critic and first-time novelist on reading and writing women

As host of NPR’s Pop Culture Happy Hour podcast—a weekly roundtable discussion of film, TV, music, and more—Linda Holmes has her finger on the pulse of emerging talent. This summer she enters the canon of creators with her debut novel Evvie Drake Starts Over (Ballantine Books, June). The slow-burning romance at the center of the book, set in coastal Maine, pairs a washed-up baseball player and a young widow who rents him a room. It also touches on professional sports, fame, small-town life, and grief and guilt in the wake of loss.

Holmes recently spoke with American Libraries about her fiction favorites, the breadth of the romance genre, and why librarians are the original influencers.

Tell me about your relationship with books and reading. Where does fiction fit in your personal pop-culture landscape?

When I was a teenager I read a ton of big, heavy commercial fiction, like Stephen King and Jackie Collins. I took a bit of a break from reading fiction as I got older because I was doing a lot of other stuff, but it’s been nice to rediscover it. Reading fiction is a unique experience and one of the few things I can do that is completely unrelated to work. Since I usually don’t cover books at NPR, it’s a way to step back from the constant in-flow of cultural products in my life.

What are some of the summer reads on your nightstand?

Recently I’ve really loved Everything I Never Told You by Celeste Ng and We Cast A Shadow by Maurice Carlos Ruffin. I read a lot of nonfiction and memoir and a good amount of what you would consider romance or women’s fiction. Right now I love Lucy Parker, a terrific romance writer who’s doing a series set in the backstage world of London theater.

This summer I’ve also read Lisa Taddeo’s Three Women and Sonali Dev’s Pride, Prejudice, and Other Flavors, and I want to read Alisha Rai’s The Right Swipe and Jennifer Weiner’s new book, Mrs. Everything. There are always so many books. Sometimes it’s hard to take the time to read a book for pleasure, but I always find it rewarding.

What experiences or influences did you draw from as you constructed Evvie Drake’s world—this town in Maine and these characters?

My family spent several summers vacationing in the part of Maine where the book is set, and it’s a place that’s very special to me. I created a fictional town, but it’s very much based on real towns that exist up there. Also, I’ve spent a lot of time loving baseball in my life. It was the professional sport I was most interested in as a kid, and it’s the professional sport that my family is most closely tied to, with my nephews playing in Little League and my brother-in-law coaching. I don’t know exactly what it is but there’s also something about baseball that’s a little romantic. Maybe it’s because it’s notoriously kind of slow and rhythmic. It’s probably the only sport I could imagine myself incorporating in a novel this way.

The characters and the setting seem to occupy a realistic media landscape, with cameos by Sports Illustrated and NPR. Was that deliberate on your part?

One of the things that makes Dean’s [the male lead’s] situation so difficult is that the collapse of his baseball career is happening very much in the public eye. Both he and Evvie are struggling with external expectations. With her it’s from the people she’s close to, people who live in her town, people who don’t understand the truth of the marriage she was in. In his case, it comes largely from people he doesn’t even know, and yet he still feels that same pressure. Placing the characters within a media landscape was a way to communicate the idea that he feels a million eyes on him all the time.

You spoke at the American Library Association’s (ALA) 2019 Annual Conference in Washington, D.C., about the romance genre, which you often write about. What’s been in your head as you enter that world as a storyteller in your own right?

Romance is such a special genre to me and, like every other genre, it has such variety in it. It’s so sad to me that there are people who are dismissive of it, because it’s such a wonderful, rich, and varied genre. It has such interesting writers and readers. Romance readers were early adopters of electronic reading, and these are people who still buy a ton of books by their favorite authors. They’re a powerful force in publishing. This book is a particular kind of love story—it does have a romance at its center, and I’m happy to be in that world.

What are your thoughts on the term chick lit? How can we do better when we talk about women-driven stories?

I don’t really care what descriptor you want to put on a good book as long as it helps people find the book. There are people who will actually look for chick lit or they’ll see something described as chick lit, and they’ll think, “That’s a term that applies to books I like.” At the same time, there’s also something obviously gendered about saying “chick lit,” or even the idea of women’s fiction as a genre, because women are the biggest fiction buyers in general. All fiction is women’s fiction, to a degree. I’ve never really even been able to figure out what women’s fiction even means, except that people seem to know it when they see it.

I say it’s fine to use descriptors so long as you don’t apply value judgments to those categories. If you’re talking about what chick lit is, what romance is, what women’s fiction is, without knowing what those books are or ever reading them, then that’s not great. Don’t dismiss books that you don’t read, and don’t dismiss books based on the idea that they’re about women, or the interior lives of women.

Librarians and fans of the Pop Culture Happy Hour podcast are groups with seemingly significant overlap. What have you learned about librarians through the podcast and its audience?

It’s remarkable how much of a role the library profession has played in the development of the show and its super-fandom. What I’ve learned about librarians is that they are incredibly curious and are very good sharers of information, knowledge, and wisdom. They really help get the word out about things—not just our podcast but the things we talk about on the show as well. If you get librarians interested in something, they tend to share it. They’re sort of the original influencers—though that word has such a bad reputation now—in the sense that they influence what people read and pay attention to. They’re incredibly valuable allies.

Do you have a favorite library?

A lot of the second draft of this book was written in the reading room in the upstairs of the Camden (Maine) Public Library. It’s an absolutely gorgeous local library, and its reading room has these giant windows that look out over the water. The ability to go there and be in the place where the book is set, among the people who live there, made it a perfect place to write. That place will always be really special to me and to the history of the book. 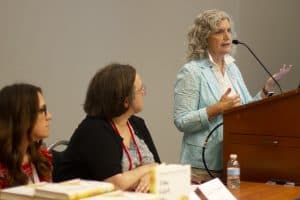 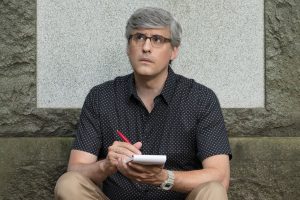 Journalist and author talks obituaries, reference books, and his most formative job