In 2019, the city of Chicago saw not just a new mayor (Lori Lightfoot, who replaced Rahm Emanuel), but also a new public library commissioner: Andrea Telli, who previously served the Chicago Public Library (CPL) system in many roles, including deputy commissioner of public services, central district chief, and branch manager. Just a few months after her appointment, CPL made headlines by becoming the largest public library system in the US to eliminate fines on overdue materials.

American Libraries spoke with Telli about her path to librarianship, her plans for CPL’s future, and the effects of CPL’s fine-free policy.

I understand that you didn’t originally plan to become a librarian.

I actually have a master’s degree in medieval and Renaissance Spanish literature. So marketable! Then I received a fellowship, and as part of it, I worked at the Library of Congress in the Hispanic division doing some archival work, and that just really grabbed me—this idea of seeing how history is perpetuated and recorded in archival collections, in stories, and neighborhoods, and how public libraries are the host of those stories. I started at CPL in 1991 as an archivist in the special collections department at the Harold Washington Library Center. I keep calling myself “the new old commissioner,” having been here 29 years.

What’s your vision for CPL?

Mayor Lightfoot is trying to elevate neighborhoods in Chicago, and this idea feels comfortable to me, like one I can make my own mission. I know the impact that libraries have in every single branch, in every single community in Chicago. With the mayor’s support, we are in the process of opening libraries on Sundays, with an increase of about 177 full- and part-time positions. We’ve opened the first group of nine branches on Sundays, and we hope to have every branch [81] in the city open on Sundays by the end of 2020.

Which branch do you use most often yourself?

I live on the Far West Side, so I use the Austin, Galewood-Mont Clare, or West Belmont branches. But the one I use most often is the Harold Washington Library Center, because I can just go right downstairs [from my office] and grab things off the shelf. I love that.

CPL went fine-free last year. What was the impetus for that, and how’s it going so far?

One of our branch managers and one of our head clerks laid out a very strong case for going fine-free. Once they did that, we took a deeper look at the data and found there was some inequity in terms of who was being affected by the inability to pay overdue fines. We had a $10 fine threshold, and in the south [part of the city], about a third of patrons were blocked from checking out materials because they had surpassed that threshold. On the North Side, we saw about one in six patrons blocked because of fines.

We felt that in order to have the public library be equitable across the city, we should remove the barrier of fines altogether. With the barrier of fines, not only did we lose the asset that all libraries want to have, which is [getting] materials back, but we also lost the patron. We’re three and a half months into going fine-free, and we’re still seeing unprecedented numbers of overdue materials coming back. And we got the patrons back, which was the most important thing.

Last year, the Chicago Teachers Union went on strike for 11 days—the longest in decades. How did that affect CPL?

I don’t want to minimize the effects of the strike on the children and families in Chicago, but we serve children and we serve families; it’s part of our mission. We saw more children in our branches, but we were providing our programs and services in very much the same way as we provide them during the winter break, for example, or during afterschool time. We saw more people, but we didn’t change our practices. 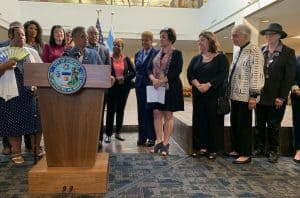 CPL is largest library system in US to stop collecting fines 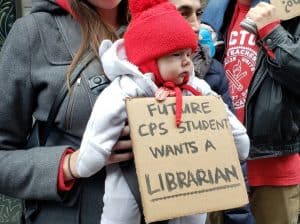