Writer and comedian Samantha Irby is author of the essay collections Meaty (2013) and We Are Never Meeting in Real Life (2017) as well as the long-running blog Bitches Gotta Eat. In 2019 she wrote the “Pool” episode of Hulu’s Shrill, which was so well received by critics and viewers alike that it has already spawned at least two oral-history articles and inspired more “fat babe pool party” events. As her new book, Wow, No Thank You (March, Vintage) reveals, Irby continues her filter-free, all-caps approach to the world, but now with a wife and two kids in Kalamazoo, Michigan, instead of Chicago.

Tell us about your new book, Wow, No Thank You.

It’s pretty much in the same vein as my other two books, but I have exhausted writing about my mom and dad, and all my pets are still alive, so there are no sad essays. It’s mostly about dealing with this aging body and still not feeling comfortable as a person on earth.

Your work is known for its disarm­ing frankness about serious topics like race, sex, weight, poverty, chronic illness—is it easy for you to write so honestly? Do you get any backlash?

You can’t say “good morning” without someone being like, “uh no, it’s a bad morning,” so I’m sure that it exists, but I don’t look for it. I think my audience knows what they’re getting.

I feel like my work is kind of provocative because, like, here’s my uterine lining and I’m going to talk about it in lurid detail. So it’s provocative, but it’s not confron­tational. It’s never an attack on anyone other than myself, and so I think people read it in a way that’s less like starting an argument and more like, “Here’s a gross thing you might not otherwise read. I hope it makes you laugh.”

I saw a comment once that was like, “People say she’s a genius, but I don’t fucking get it,” and I was like, “You know what? Me too. I only went to high school. Genius is a weird word. I get it.” Honestly, people can say whatever they want as long as they pay for the book. Did I get your $15 or whatever? Great. Thank you. Sorry you hated it.

The New York Times called the “Pool” episode of Shrill one of the best episodes of TV of 2019. How did you get involved in writing for that series, and what was the inspiration for that episode?

Lindy [West] and I are friends; we share a TV agent. We were looking for a way to have [Annie, the main character] go through a trans­formation that felt realistic. I think, especially when you’re talking about a very specific type of fat acceptance or positivity, it’s not an overnight thing. You don’t just wake up one day, see a girl in a bikini, and go, “Yep, me too.”

But it can be a transformative experience to go to one of those things. I have been to fat pool parties before and clothing swaps and Dance Dance Party Party. And your first time going to something like that, especially if you have not grown up with the confidence to walk into a party and see women being like, “Yes, I’m a size 32 and I’m wearing a miniskirt and I’m having fun,” it can be a revelation. So we wanted Annie to have that kind of experience.

And also, selfishly, I was like, “I don’t know another time when someone is going to give me hundreds of thousands of dollars to have fat girls in bikinis on TV.”

I had no idea it was going to be as beautiful as it was. I think in the script, I put that I wanted it to look like Candy Land, and they really did get it to this vibrant, beautiful thing. That was super cool.

What’s the status of the show you were developing based on Meaty?

I turned in my final pilot draft, and now we’re just waiting to see what Comedy Central wants to do. I like the pilot a lot. I think it’s funny. I mean, no one is inventing the wheel, but it is very me, in that it’s full of sex, poop, and vomit, hacked into 22 minutes. I don’t know if people want to give me money to make that, but hopefully.

What are you reading right now?

When I’m writing my own thing, I don’t read essays at all because they just make me feel like a fraud. But I just started Long Bright River by Liz Moore. And Queenie by Candice Carty-Williams, Your House Will Pay by Steph Cha, and Uncanny Valley by Anna Wiener—those are my most recent. Those are my next-to-the-bed books.

What has been the role of libraries in your life?

I remember having a huge fine because I lost One Hundred Years of Solitude by Gabriel García Márquez. I thought I was going to read it because I read The House of the Spirits by Isabel Allende, and I was like, “Hmm, I’m into magical realism now.” I got One Hundred Years of Solitude and lost it, and I was too afraid to tell the librarian. But I eventually paid the fine.

My wife is a big reader, and she belongs to the library. We get sent so many books that she’s just going to put me out because there’s not enough bookshelves at home. I need a way to read what I want and also not get divorced. So the library has come in handy for getting me the books that I want and giving me a place to take them back to.

You’ve been a prolific blogger, essayist, advice columnist, and TV writer. What would you like to write that you haven’t written yet?

Oh man, I’m going to be so gross and say that I have a couple of chapters of a novel written. I feel much more protective of my fake universe than I ever have of my real stuff. I have no problem being like, “This is the time I got my heart broken. This is a place on my body that’s decaying—I’m going to use these 2,000 words to talk about it.” But my fake little universe that I’ve cobbled together, I won’t even show my agent. One day I will send him three chapters and then think about finishing it depending on what he says. 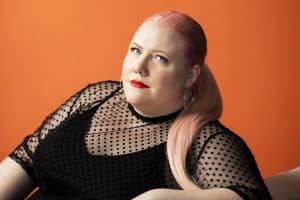 The author talks about structures of oppression and life after Twitter