When Not to Call the Cops

A plea to protect Black patrons

Four police officers confront a Black man at a library computer and tell him that because he’s been disturbing other patrons, he must leave the premises. The man refuses. The confrontation ends when the Black man is tased and dragged out of the library by the officers.

This incident took place at the library where one of us, Jarrett Dapier, worked as a readers’ advisor and program coordinator serving teens. (He was not present but has seen cellphone footage of the incident.)

Calling the police when a patron is disruptive may seem like a library’s only course of action. But often, the potentially violent results aren’t considered. They should be.

Black people are three times more likely than white people to be killed by police according to Mapping Police Violence, a research collaborative that collects national data on police killings. Every time library staffers call the police, we put the lives of our Black patrons in danger.

In the aftermath of George Floyd’s killing by police and the resurgence of the Black Lives Matter movement, more and more librarians must understand this fact. Important as it is to read books and listen to podcasts about antiracism, it’s more urgent for librarians to assess their libraries’ policy–or lack thereof–regarding calling the police. When are police called to your library? Why? On whom?

Police are not a de facto security service and shouldn’t be used that way. As a general rule, if you have to think about whether you should call them, don’t. Shootings, fistfights, kidnappings—these are situations in which you should reach for the phone. Not when a 13-year-old shouts unkind words at you. That child doesn’t deserve to be traumatized and funneled into the criminal justice system, likely with lifetime effects, for impulsive behavior.

We are in the business of providing information to our patrons. When we resist calling the police, when we seek to peacefully help distressed patrons, when we sit patiently with disruptive teenagers until they agree to change their behaviors, we communicate the importance of empathy and non-violence. By keeping our libraries as police-free as we can, we communicate to our patrons that Black Lives Matter.

The library in the incident above now employs onsite social workers who can intercede with distressed patrons in ways that don’t result in potential murder or jail time. (It’s important to realize that seemingly small uses of force, such as tasering, can be dangerous, even fatal.)

Of course, not all libraries are fortunate enough to have a social worker on staff. If that’s the case, you and your staff must nonetheless find alternatives to calling the police, asking yourselves: “What does this person need? Who can help?”

Stop calling the police. Find other solutions. This is lifesaving, antiracist work libraries can do now.

JARRETT DAPIER is a young adult librarian at Skokie Public Library in Illinois. EMILY KNOX is associate professor and interim associate dean for academic affairs at the University of Illinois School of Information Sciences. 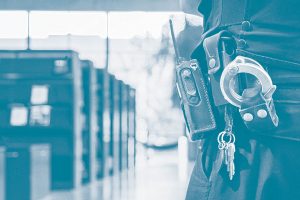