Model, author, and television host and producer Padma Lakshmi is having a productive year: The 18th season of her reality competition show Top Chef concluded this summer, snagging five Emmy nominations; she released a children’s book, Tomatoes for Neela (Viking Books for Young Readers, August), with illustrator Juana Martinez-Neal; and her travelogue series Taste the Nation returns to Hulu on November 4 with a collection of holiday episodes. American Libraries talked with Lakshmi, fresh off her appearance at the American Library Association’s 2021 Annual Conference Virtual, about the intersection of cooking and family, how we can save the restaurant industry, and the value of creating space for everyone’s food story.

You’ve authored two cookbooks, a food encyclopedia, and a memoir. What made you want to write the children’s book Tomatoes for Neela?

This book is based on a story I would often tell my daughter, who is now 11, as I was putting her to sleep in earlier years. I think one of the best things you can do for a child is impart a love of food and the preparation of that food from early on.

It was important to me to be able to write a children’s book specifically about food and family. It’s important to instill in children a consciousness of who’s making their food, who’s bringing them their food, where it comes from, and what environmental effects the way we eat has on our world. Having as many generations in a family as possible contribute to your child’s learning gives them different perspectives that one person cannot do themselves. That’s why themes of agricultural history and ancestral knowledge were included.

You’ve been a vocal supporter of restaurants and restaurant workers as they’ve weathered the pandemic. What will it take for the industry to get through this moment?

People don’t realize how low the margins are in restaurants, and they don’t realize that many restaurant workers are barely being paid a living wage. Those margins and hardships have been laid bare during quarantine.

I think the restaurant industry will bounce back. It’s one of the biggest sectors in our economy, and a major way in our society that we bond with family and friends and even do business. But how will it come back? I think it’s a great opportunity to right a lot of wrongs that have been going on for a long time. If we can use this moment to restructure the hours that many restaurant workers have, that will be a big start—making it more equitable, making sure we allow both our male and female restaurant workers to have a life outside of the restaurant, so that they too can grow their families. I for one would rather pay a couple extra bucks for my burger or pizza or seven-course tasting menu if I knew that people were not being pillaged at their jobs for that discount. And I think most people feel that way.

Your show Taste the Nation showcases the culinary contributions of our country’s immigrant groups. When filming, which place left the biggest impression on you?

El Paso is a place I had never been to before we filmed there. There is not just a Texas culture or a Mexican culture but this third thing, this Tex-Mex culture, which has people going back and forth across the border in this symbiotic relationship [with] the city of Juarez. It was really eye-opening. It taught me about the implications that a false border or wall or other delineation has for separating people—people who just want to live their lives freely and peacefully and prosperously.

Top Chef exalts this rarefied experience, and it’s wonderful because many of us will not have the opportunity to go to those fine-dining restaurants. But [with Taste the Nation], I wanted to do a show that taught and explored how most of us eat. Whether you eat kimchi and japchae or mango pickle and yogurt rice, your personal foodways are valuable, they’re compelling, and they’re no less interesting than anyone else’s story or experience.

Writing has been a large part of your career. What’s your relationship with books and libraries?

When I was growing up, I would spend a lot of time in the library because it was just a cool place to do my homework after school. Not all my upbringing was peaceful, and the library offered me a safe, quiet, protected haven. I relied on the staff to help me explore whatever my interests were.

I grew up flitting back and forth between here in New York City and India, at my grandparents’ house, where I spent every summer of my school-age life. [There was] my grandmother’s love of cooking—she’s a very practical woman, and the life lessons that she taught me came from spending time with her in the kitchen. My grandfather, on the other hand, was this incredibly scholarly man. He could quote Wordsworth and Shakespeare by heart. He read books on everything from physics to ancient history to cricket statistics. I am very much a product of their influence and their counsel, because I love books and I love food. Those are the two things I love most in the world. 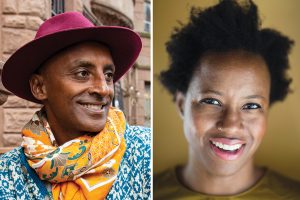