Award-winning author and professor on how fiction breeds understanding

George Saunders is best known for his dystopic short stories that satirize—and humanize—the absurdities of our shared reality. His forthcoming collection Liberation Day (Random House, October) is no exception, exploring themes of power, ethics, and justice amid backdrops of a hailstorm, a tyrannical government, and an underground theme park. American Libraries spoke with the Man Booker Prize winner (for Lincoln in the Bardo) and National Book Award finalist (for Tenth of December) about today’s partisanship, his love of teaching, and his connection to libraries.

In your forthcoming collection Liberation Day, “Love Letter” is about a grandfather who writes to his grandson in an authoritarian near-future, expressing contrition and caution about the political situation and observing that people are unpersuaded by others’ beliefs. Is this a speculative tale or do you think our country is at an impasse?

In “Love Letter,” I was turning the lens on myself. I don’t have grandkids, but I do have grown children. And I noticed that during that [2020] preelection time, I was so weirdly patriotic and suddenly realizing, “God, I really have taken for granted all of this stuff.” So I had a discussion with a friend on the right. And then I had a discussion with a friend who is even to the left of me, which is kind of hard to accomplish. The conversations were quite loving, actually. They got a little energetic, but that’s one of the ways a country gets made: high-functioning conversations that have warmth, even if they’re in opposition. I thought, “Let me try to do a slightly askew version of what I’m feeling right now.”

Are we going to be able to learn to talk to one another again? That’s really a vital thing. Maybe I’m naive, but I think fiction is one way we can train ourselves in that kind of openness.

You’ve been an instructor at Syracuse (N.Y.) University for 25 years, and you also lead classes online. What drives you to teach?

At first it was just money. But over the years that really shifted, and it became the spiritual center of my life. Selfishly, it’s a way of reminding yourself that you don’t understand your art form yet. When you’re teaching, you’re constantly opening the hood of the car asking, “How does this particular model work?” I love that. And the students we have, they’re so good. You absolutely can’t phone it in. You get a chance to be in fresh connection with young people, with their creative energy and their curiosity and vision. It’s a way of enforcing humility on yourself. I hope I do it until I’m 180. I’d have to be propped up: “Show, don’t tell!”

You’ve spoken a lot about kindness—in interviews, in a noteworthy commencement speech—and the importance of extending kindness to those we may not know and those we may disagree with. You’ve also said that you’re not a fan of social media. Do you think our digital relationships get in the way of cultivating a deeper empathy?

Yes, I really think they can. Look at the difference between your social media discourse and tone and how you are at the grocery store. I think people give themselves a free pass when they’re online, especially if they’re anonymous. Of course, there’s lots of wonderful things that happen online too, but I’ve been thinking a lot lately about the difference between social media mode and literary mode. In literature, the main idea is “I don’t know yet.” Your mind presents an opinion, and instead of dashing to the keyboard and sending it around the world, you say, “Well, hold on a minute. Let me try another revision to see if there’s any falseness in my prose that is signaling that I’m not right.” Like when you’re writing a story, your first draft might have a simplistic villain. That doesn’t sit well with you as you’re reading it again, so you alter it, and your villain gets a little more three-dimensional. You feel a little more empathy for that person.

We’re doing way too much social media mode, which is quick takes, slightly snarky, the aim being to get attention of any kind. And we’re doing too little of the literary thing, which is “I feel this right now. But, you know, I’ve been wrong in the past.” Kindness is hard, but I think it’s closely related to awareness. The key is to slow down. That’s notable when we think about how many hours we spend on social media. If you’re enacting a different personality for that much time, it will change the direction of the culture.

For me, it’s the place where our democracy says, “Knowledge is power.” And [there’s] a team of people who are going to make sure that anybody, no matter their economic circumstances, has access to the best that the world can offer. So I’m a huge fan.

One of my earliest memories is my grandmother taking me to the [Chicago Public Library (CPL) branch] in Gage Park, right down the block from her house on 55th Street. When you’re little, you’re so hyperaware of what the grownups are telling you and how they’re positioning you. We walked in, and my grandmother fell silent and kind of gave me a look: “In here, we’re quiet.” In my mind, it was connected to church, because people were in here doing serious things that I didn’t quite understand. But I could feel the reverence that my grandmother had for the place and the people. I feel that every time, especially if I go to an old library that has a kind of wooden, old-book smell.

When I was in my 20s, I was floundering. I was living with my aunt, doing roofing jobs, and trying to be a writer but hadn’t read enough contemporary fiction. Every time I read I would just want to read Hemingway again. I don’t know what compelled me to do this, but I took the train downtown to [CPL’s main library], in the middle of the day in my roofing clothes, and I had a mission in mind to see if there was anything new that I needed to know. And that day there was a beautifully stocked shelf of literary journals. I got about 15 of these journals that I had never heard of—I had never seen them in a bookstore—and just piled these books on the table and started reading. I hit a story by Stuart Dybeck, “Hot Ice,” and instantly recognized the syntax and the diction of the South Side, where I was from. He was talking about neighborhoods the way that we talked about them. I thought, “Oh my God, you can do this?” My face got so hot and red. “Oh, you stupid idiot. What have you been doing all these years?”

The point is, I could have gone into a million bookstores and probably would have never found that story, and I couldn’t afford to buy 15 journals. The library—democratization—let me, a roofer with $8 in my pocket, sit down and get a quick snapshot of contemporary American literature, and it changed my life. 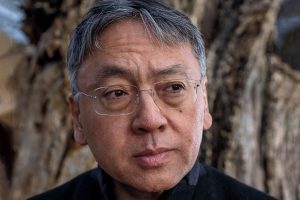 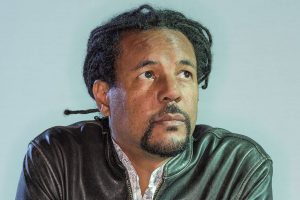