Patrons herd together for goat yoga

It’s not every day that patrons dodge prancing barnyard goats while navigating instructor-led yoga sessions, but goat yoga (exactly what it sounds like—yoga in the company of goats) is finding a surprisingly warm reception in the library world.

The novel form of exercise, which was founded by Lainey Morse in 2016 with her Original Goat Yoga company and has since found loyal fans all over the country, gives new meaning to community engagement.

Just ask Mary Woodward, circulation services supervisor at Bedford (Tex.) Public Library(BPL). After considering ways to rethink her library’s approach to programming, she contacted a local vendor who was able to present a yoga experience that was well off the beaten path.

“It looked like so much fun,” Woodward recalls thinking when she booked the goat yoga session as part of her library’s fall 2021 programs. “They even brought the goats in Halloween costumes.” She describes the whole event as “a belly-laughing, picture-taking, goat-cuddling good time.”

As with other forms of yoga—and animal appreciation—the audience for the activity isn’t limited to anyone demographic.

Catherine Folk-Pushee, adult services librarian at Johnson Public Library in Hackensack, New Jersey, cosponsored a goat yoga event in May with neighboring Rochelle Park Free Public Library. The event featured one session for adults and one for kids.

If you’re wondering how much actual physical contact goat yoga practitioners have with the animals, the answer is: It varies. “For the adults, the yoga teacher began with some stretching and warm-up exercises while the goats wandered throughout,” Folk-Pushee says. Adults then form a line in table top pose (or other goat-friendly poses low to the ground), she explains, as the handler leads a goat across everyone’s backs.

Obviously, not every library will have an outdoor area suitable for goat yoga.

“The space has to be even bigger [than for traditional yoga] to accommodate jumping, inquisitive, sometimes headbutting goats,” advises Sarah Kleiva, community engagement manager for Orland Park (Ill.) Public Library (OPPL). It also must be an area, she says, “where goat piddle won’t be an issue.”

In OPPL’s case, an existing, fenced-in backyard with durable decking worked well. “We still had to put up [additional] temporary fencing to prevent the goats from eating our garden,” Kleiva notes. That’s because—aside from the need to keep the goats inbounds—some of the plant species in the yard were potentially toxic to them.

No goats, no glory

It’s important for any library interested in presenting a similar program to work with a reputable goat yoga company. For a fee of $400, Nature’s Trail Goat Yoga provided OPPL with an instructor, eight goats, and three wranglers for one hour—about 35 minutes of yoga and the rest of the time for cuddles and photos.

Goats used by well-run companies are brought up to be comfortable around people. “Goat yoga companies raise their goats from babies to be socialized to doing yoga classes with people,” Kleiva says. “They tend to use smaller breeds and know their goats’ personalities very well.” Young ones are especially fun; she suggests asking your local contact when babies may be ready for goat yoga classes so you can schedule a class that month.

A goat yoga company can also handle some of the behind-the-scenes logistics. BPL’s program was led by a certified goat yoga instructor (yes, that’s a thing), and two wranglers made sure everyone had ample one-on-onetime with the goats. The company, Woodward says, took care of both setup and cleanup. “Participants registered and paid on Goat Yoga Dallas’s own event page,” she says, “and our city attorney required all participants to sign a liability waiver in case of a goat catastrophe.”

As with any activity that includes animals, librarians advise overpreparing. Kleiva suggests attendees bring older exercise mats or towels that they’re not worried about getting messy.

Mostly appealing to yoga beginners and, perhaps, people who enjoy getting up close and personal with animals, goat yoga encourages patrons to find the connection between nature and self-care as they practice breathing exercises and learn about goats and their behaviors. The program is a good fit for libraries, assisting them in their core mission to provide programming that educates and creates a healthy community. At OPPL, library staffers happily took plenty of “goat-back selfies,” Kleiva says, and helped participants get petting time in as well.

“Librarians are always looking for new ways to bring people to the library,” Woodward says. “Unique programming like this is a great way to attract them. Our goat yoga event was so much fun and a big success. I took the class myself and had a blast. I’ve already booked another one.” 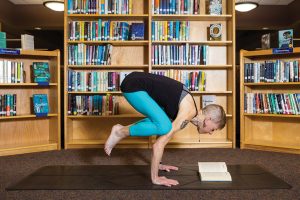 Bookend: Go with the Flow 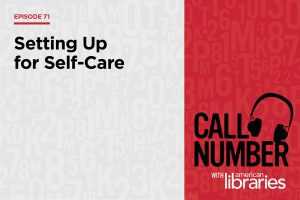