A Midwinter Update on the Digital Public Library of America

The Digital Public Library of America (DPLA) aggregates resources that can be made freely available on the web from libraries, historical associations, and other cultural institutions; applies metadata; provides a platform for discovery; and makes the resources available in one central place on the web for researchers and other interested parties. Executive Director Dan Cohen provided an update on its continued growth on Sunday afternoon at the 2014 ALA Midwinter Meeting in Philadelphia.

DPLA launched in spring 2013 with the goal of being a portal for discovery, a platform on which others could build and, by enhancing data useful to their audience, a “strong public option” for reading and research in the 21st century—not “just a website.” Upon its launch, DPLA provided access to 2.4 million items from six service hubs (regional libraries that pull data from other institutions) and 500 contributing institutions altogether. Among others, the National Archives, Smithsonian Institutions, New York Public Library, and large US academic libraries contributed resources. DPLA offers curated exhibitions—items with a unified theme from across collections held by many institutions—and provides geolocation services for as many of those items as possible. One feature of DPLA is an interactive map linking resources to their locations.

On June 18, 2013, DPLA embarked upon a project to incorporate over one million books from HathiTrust (http://www.hathitrust.org/). This past summer it also announced the addition of new hub sites in New York, North Carolina, and Texas, and it continues to seek more regional hubs. In the fall, DPLA crossed a threshold of more than 1,000 contributing institutions. These content-contributing partners are a very diverse set; 30% are college and university libraries; the rest include archives, public libraries, publishers, historical societies, and federal, state, and local government agencies. Also in the fall, DPLA received a $1 million Gates Foundation grant to connect directly to public libraries and a $500,000 gift from an anonymous donor.

DPLA offers a library of apps, many developed by participating institutions—that demonstrate interesting uses of DPLA data. Geolocation allows the creation of apps such as OpenPics, which delivers all the nearby DPLA content to a mobile device, creating an ad-hoc walk through the past. Another app is Serendip-o-Matic: Paste any text into it and Serendip-o-Matic will extract words and topics to provide materials relevant to the text. This is useful for writing papers in course assignments.

Time identified DPLA as one of its 50 best websites of 2013. DPLA was also recognized for the 2013 Nominet Trust 100 and chosen as one of AASL’s 2013 Best Websites for Teaching and Learning.

The collection continues to grow daily and platforms are under development. EBSCO created a one-click install for a DPLA widget in EBSCO's discovery system: if you do a search, you will get a sidebar with all relevant DPLA content.

Numerous issues and possibilities emerged from the audience questions that followed Cohen’s presentation. He indicated DPLA’s interest in working with partners to enhance service to blind and print-disabled users. Additionally, audiovisual materials are difficult to ingest due to the different kinds of rights inherent to those formats and indexing and metadata are not as easy with AV resources. DPLA is working with its counterpart in Europe, Europeana, on more robust indications of the rights available with each resource, hoping to offer more granular descriptions of the permissions of each item.

The big question posed to Cohen was about the long-term future of DPLA. He said that DPLA staff are constantly working on strategic planning, reassessing how they can add value to the information ecosystem. In the short term, DPLA will add new hubs, striving for maximal geographical coverage, so that small archives can get assistance and DPLA can provide access to their resources. From there, “things get interesting,” he said, noting that apps demonstrate that very novel things can be done with DPLA resources. Theoretically artwork, science databases, and journal articles can be ingested: What could DPLA do with such a comprehensive collection? DPLA could even be a “hospitable environment” for recent ebooks: Cohen himself has written two books that are available on the open web as well as for sale on amazon.com.

After the discussion, audience members eagerly took Cohen up on his invitation to consult with DPLA staff who were present as well as with people affiliated with content hubs who were present. 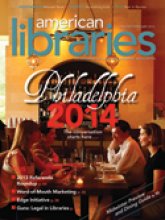 My Taste of Philadelphia