Alison Bechdel: A Life in Books

The Association of College and Research Libraries (ACRL) ended its 2019 Conference in Cleveland on Saturday, April 13. The event drew 3,335 onsite attendees, as well as 1,033 exhibitors, from all 50 states and 22 foreign countries and featured a rocking reception at Cleveland’s Rock and Roll Hall of Fame on Friday night.

Internationally renowned cartoonist Alison Bechdel was the closing keynote speaker. She illustrated her talk throughout with panels from her graphic novels Fun Home (2006) and Are You My Mother? (2013), as well as her long-running comic strip Dykes to Watch Out For.

Bechdel said she realized at age 19 that she was a lesbian, “though it was a revelation not of flesh but of mind.” Early on she had checked out books from the library on homosexuality, trolling the public library card catalog for them, heedless of the risks. “At some point I had a strong library cathexis—which is intensely focused mental energy directed at one person, object, or idea, especially to an unhealthy degree,” she said. “This is apparently a key characteristic of queer people—shamed persons who are drawn to lonely stacks and secret research.”’

As a college student, Bechdel got a job working at the circulation desk because she scored higher than her supervisor on the shelf-reading test. Working at the library, “I felt like a librarian manqué,” she said. “I was like a god: I enjoyed the crunching of the book charging machine, people came and asked me questions, and I loved getting sent into the stacks to reshelve books. That’s where I stumbled into a book by French literary critic Roland Barthes. I might have otherwise led a completely different life.”

Bechdel’s father also had an extraordinary home library—“a fantasy library, but a fully operational one.” In fact, it represented a “full circle back to cathexis,” she said. “My father learned who he actually was [his own queerness] from his books.” He committed suicide in 1980 because he “couldn’t handle his secret gay lifestyle,” she said. Through her own reading and writing Fun Home, Bechdel said she “found my way to the core of my family, the truth behind the façade.”

She began drawing very early on, and when she was 7, “I learned I could tell stories with drawings. I drew all the time as if it were already my job,” she said. “When I was 10, I began keeping a diary—my father showed me how to do it—and I completed my first homemade book at age 12, An Odd Collection of Alison Bechdel’s Works.”

After her father’s death, she moved to New York City and drew for WomaNews, a feminist newspaper, where she soon evolved from single-panel drawings to multipanel strips in her syndicated comic, Dykes to Watch Out For. In 2001, she sent one of her regular characters, Mo Testa, to library school in a story titled “The Bibliophile.” Mo had been drawn into “the pitfall of vocational awe, believing that her public library job is a religious calling,” Bechdel said.

She said that “books for me are life itself … and a way of getting past the lies and seeing things as they really are. My childhood fear of lying now seems quaint in this current age of circular reasoning and false equivalency. Words are becoming tools to obliterate meaning.” Weaving a story of words and pictures should allow us to get closer to the truth, she said, “but it just as easily takes us away from it.”

She closed by saying, “You can’t feed people the truth, but you can give them the means to access it, archive it, and preserve it.” 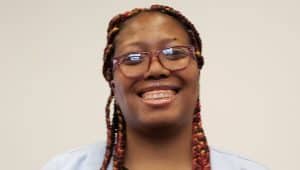 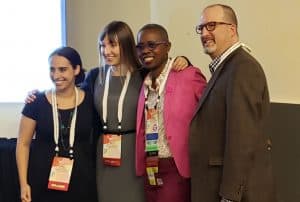 Reporting in the “Post-Truth” Era