At the Random House Preview Lunch during the American Library Association’s 2019 Annual Conference and Exhibition in Washington, D.C., the room was packed with eager children’s and school librarians ready to hear about new children’s, middle grade, and YA books coming this fall.

One picture book was Marie Kondo and Salina Yoon’s Kiki & Jax: The Life-Changing Magic of Friendship, about two unlikely best friends who learn how tidying up can create space for joy in all parts of one’s life. Other treasures included the picture book Sunny Day: A Celebration of the Sesame Street Theme Song, as well as the the previously unpublished Dr. Seuss manuscript Dr. Seuss’s Horse Museum.

Author R. J. Palacio—best known for her 2012 bestseller Wonder and the hit 2017 movie of the same name—also talked about her upcoming graphic novel White Bird: A Wonder Story, which is set in the world of Wonder.

With White Bird: A Wonder Story, Palacio expanded on a chapter from her book Auggie & Me, in which she tells the backstory of a bully character. She says that family and audiences kept coming back to this character’s backstory as a way to talk about the horrors of the Holocaust with younger audiences, who may not hear or learn about it until their tweens/teens.

AMY STEINBAUER is a children’s librarian in the Washington, D.C., area. 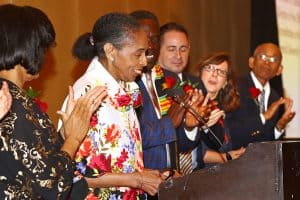