On November 8, the American Library Association (ALA) announced the six titles shortlisted for the Andrew Carnegie Medals for Excellence in Fiction and Nonfiction. The awards recognize the best fiction and nonfiction books written for adult readers and published in the United States during the previous year. The two medal winners will be announced online at 5 p.m. Central on January 23 during the Reference and User Services Association’s (RUSA) Book and Media Awards virtual event held during LibLearnX: The Library Learning Experience.

The 2022 Andrew Carnegie Medals for Excellence in Fiction and Nonfiction shortlist titles include the following:

The Five Wounds by Kirstin Valdez Quade (W. W. Norton & Company). Amadeo Padilla filled the role of Jesus during the re-creation of the Crucifixion as part of Holy Week. He also has heavy burdens to bear in his real life in New Mexico, with his pregnant teen daughter and an ailing matriarch. Quade delivers an authentic tale of characters who understand the inevitability of fate but try to forge ahead anyway.

Matrix by Lauren Groff (Riverhead Books). In the 12th century, Marie, a 17-year-old former child crusader and “bastardess heir to the crown” of France and England—considered unmarriageable due to her great height and plainness—arrives at the dismal abbey that she will eventually transform as abbess over the course of Groff’s novel on faith, power, and temptation.

The Thousand Crimes of Ming Tsu by Tom Lin (Little, Brown and Company). In 1869 Utah, Ming Tsu reckons he has killed some 200 men and is on his way to kill the five who beat him, stole his wife, and had him sentenced to 10 years of forced labor building the Central Pacific Railroad. Two years later, Ming has escaped and is ready for retribution in Lin’s first novel.

A Little Devil in America: Notes in Praise of Black Performance by Hanif Abdurraqib (Random House). Blending pop culture essays, memoir, and poetry, Abdurraqib delves into the many iterations of Black artistic expression through an often deeply personal lens. Divided into five “movements,” these pieces explore subjects ranging from the often-tragic lives of legendary Black artists to close examination of a singular performance.

Seek You: A Journey through American Loneliness by Kristen Radtke (Pantheon Books). Radtke examines isolation as a social, biological, and personal phenomenon in a graphic-essay style, centering her inquiry on four human behaviors—listening, watching, clicking, and touching­­—and considering television, American “loners,” social media, and the need for touch in prose and vector-drawn illustrations.

Carnegie Medal winners will each receive $5,000. All finalists will be honored during a celebratory event in June 2022 during ALA’s Annual Conference and Exhibition.

The medals are made possible, in part, by a grant from Carnegie Corporation of New York in recognition of Andrew Carnegie’s deep belief in the power of books and learning to change the world. They are cosponsored by ALA’s Booklist and RUSA.

ALA Announces LibLearnX Will Be Virtual 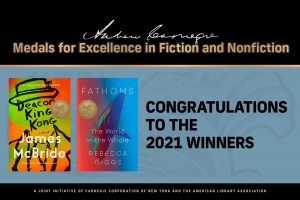