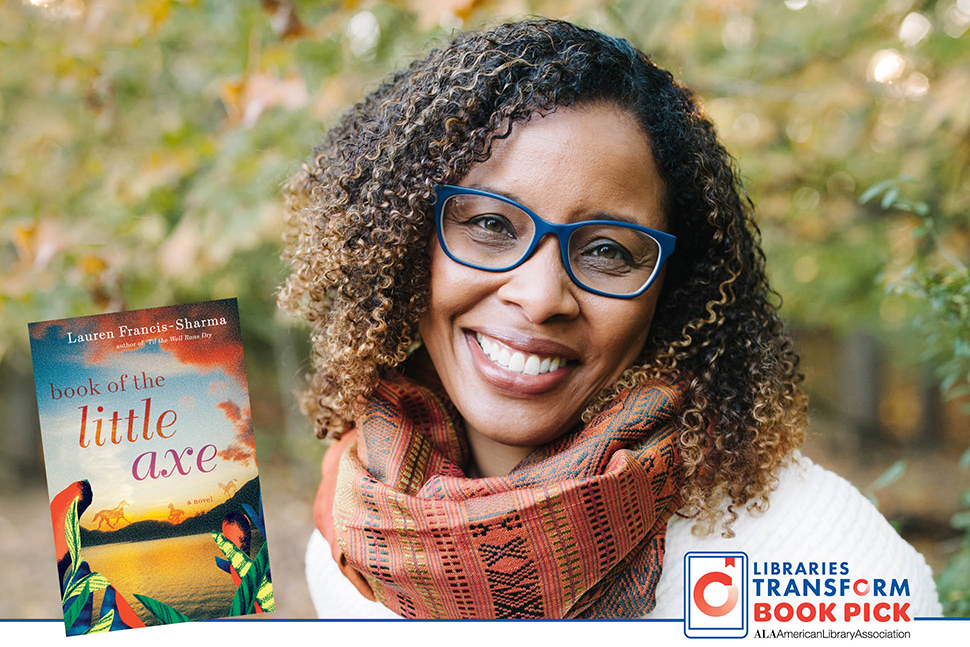 This interview was first published in Booklist’s August 2020 issue. A historical novel set in Trinidad in 1796 and the Crow Nation of the Great Plains in 1830, Francis-Sharma’s second novel (after ‘Til the Well Runs Dry) follows the struggles and adventures of Rosa Rendón, who pushes back against the restraints associated with her sex and … END_OF_DOCUMENT_TOKEN_TO_BE_REPLACED 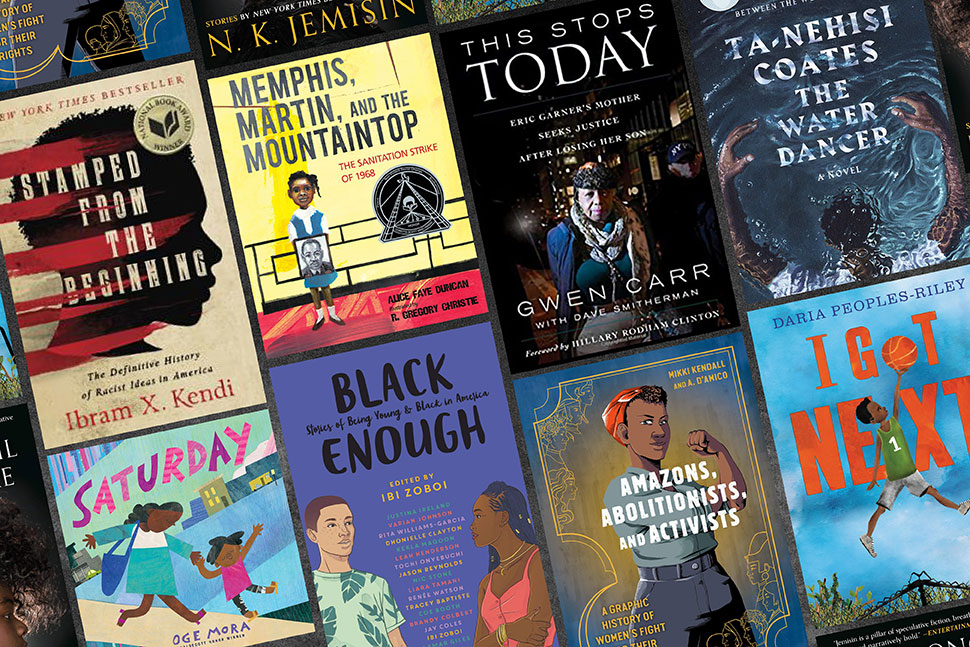 Reading for Change: Booklist Recommends Antiracism Titles for All Ages

Booklist recently compiled a list of antiracist books and other resources for librarians and readers. The full list is reprinted below.  It can, of course, also mean reading. We’ve seen the antiracist reading lists; there’s New York magazine’s roundup, Betsy Bird’s comprehensive piece for Fuse8, the Stacks’ collection of nonfiction, the list goes on. There’s … END_OF_DOCUMENT_TOKEN_TO_BE_REPLACED 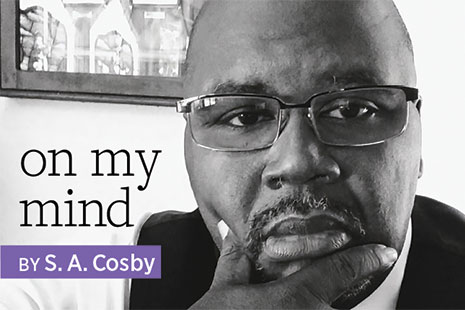 Judged by the Cover

The following guest column is a reprint from the rereleased May 1 issue of Booklist. This is an opportunity to have substantive conversations about our perceptions, as well as the changing face of the publishing world and the paucity of diverse crime writers. In their desire to be socially conscious, many may have missed that … END_OF_DOCUMENT_TOKEN_TO_BE_REPLACED 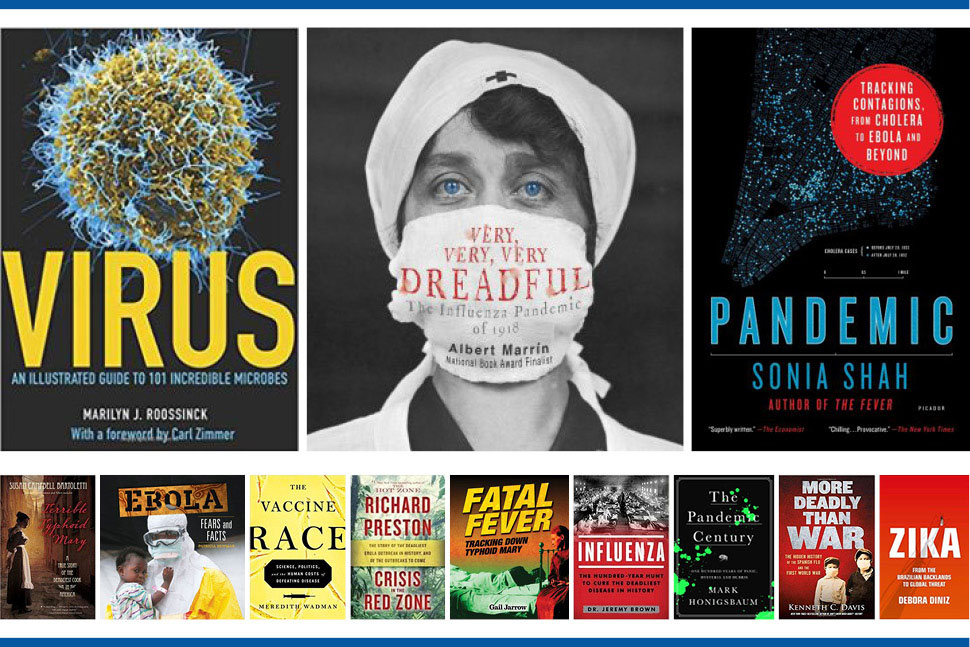 On February 13, Booklist compiled a list of resources for librarians looking for information on the coronavirus and other epidemics and pandemics. The full list is reprinted below.  Adult Books ★ Crisis in the Red Zone: The Story of the Deadliest Ebola Outbreak in History, and of the Outbreaks to Come by Richard Preston Preston, who first … END_OF_DOCUMENT_TOKEN_TO_BE_REPLACED 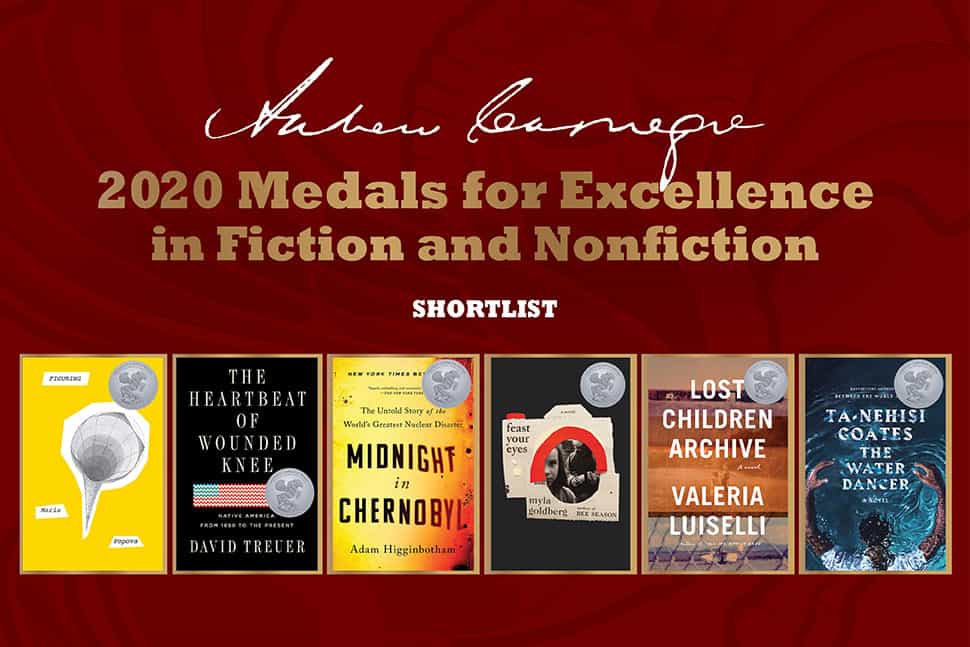 The 2020 Andrew Carnegie Medals for Excellence in Fiction and Nonfiction shortlist titles include: Nonfiction Figuring, by Maria Popova (Pantheon). Popova brings her zest for facts and passion for biography to this inquiry into the lives of geniuses who “bridged the scientific and poetic,” spinning a fine web connecting such barrier-breakers as Rachel Carson, Frederick Douglass, … END_OF_DOCUMENT_TOKEN_TO_BE_REPLACED 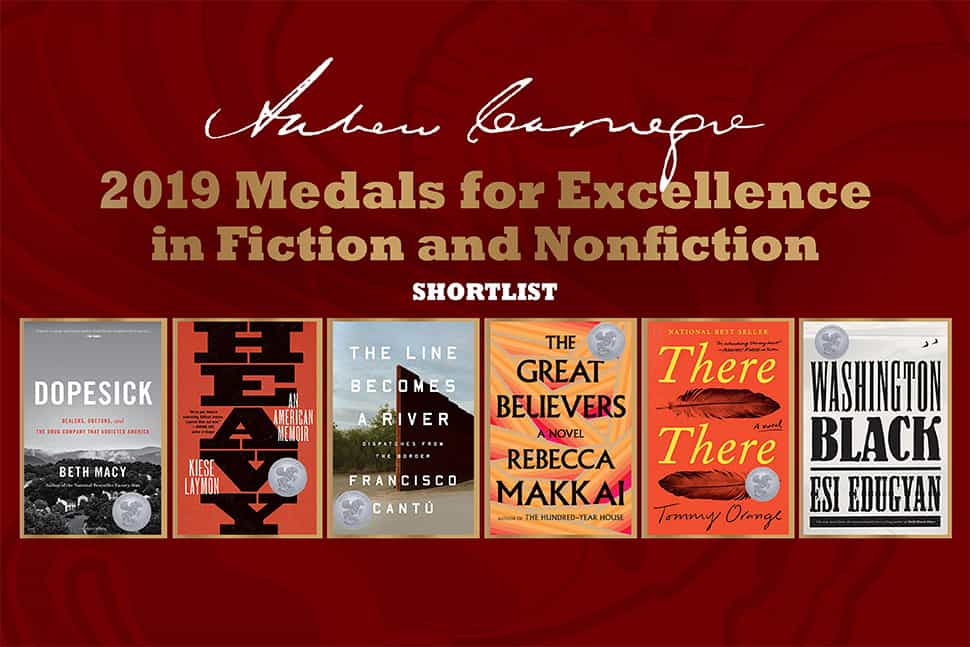 2019 Andrew Carnegie Medals for Excellence in Fiction and Nonfiction shortlist titles include: Nonfiction Dopesick: Dealers, Doctors, and the Drug Company That Addicted America, by Beth Macy (Little, Brown and Company). Macy’s years of reporting on the still-unfolding US opioid crisis earned her remarkable access to people whose lives have been upended. Dopesick is a timely … END_OF_DOCUMENT_TOKEN_TO_BE_REPLACED 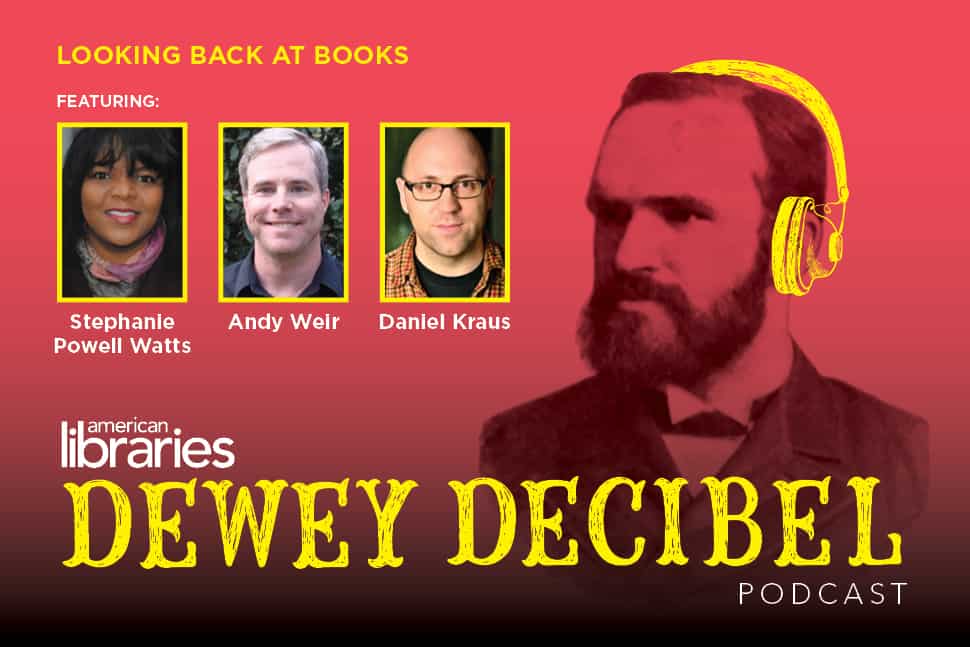 First, American Libraries Associate Editor Terra Dankowski talks with author Stephanie Powell Watts in a conversation taped right after her book No One Is Coming to Save Us was announced by Sarah Jessica Parker as the first selection in ALA’s Book Club Central. Next, American Libraries Associate Editor and Dewey Decibel host Phil Morehart speaks … END_OF_DOCUMENT_TOKEN_TO_BE_REPLACED 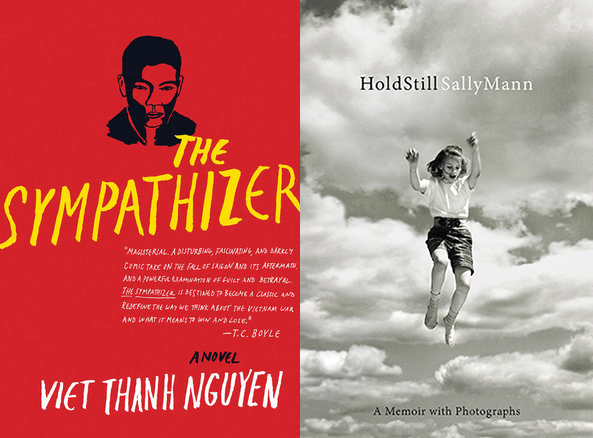 The selections were announced January 10 during the RUSA Book and Media Awards Ceremony and Reception that are part of the ALA Midwinter Meeting and Exhibits in Boston. Viet Thanh Nguyen’s bravura debut novel, The Sympathizer, illuminates the double-mindedness of a half-French, half-Vietnamese spy as he confronts impossible and dire situations in divided, war-torn Vietnam … END_OF_DOCUMENT_TOKEN_TO_BE_REPLACED 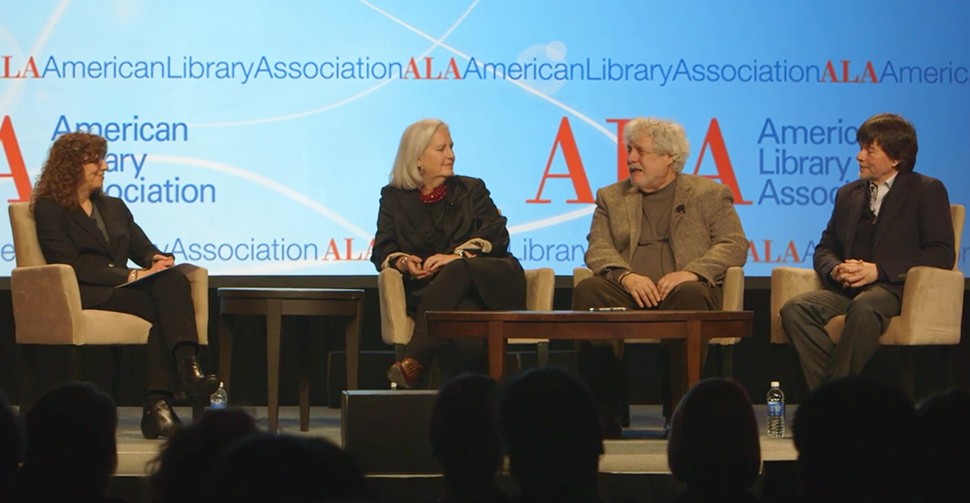 Oscar-nominated documentary filmmaker and writer Ken Burns’s response when asked how he chooses the subjects of his work encapsulates “The Writer as Witness,” the theme of the ERT / Booklist Author Forum at the 2016 ALA Midwinter Meeting in Boston. A writer must look both outward and inward to completely, accurately, and honestly tell a … END_OF_DOCUMENT_TOKEN_TO_BE_REPLACED 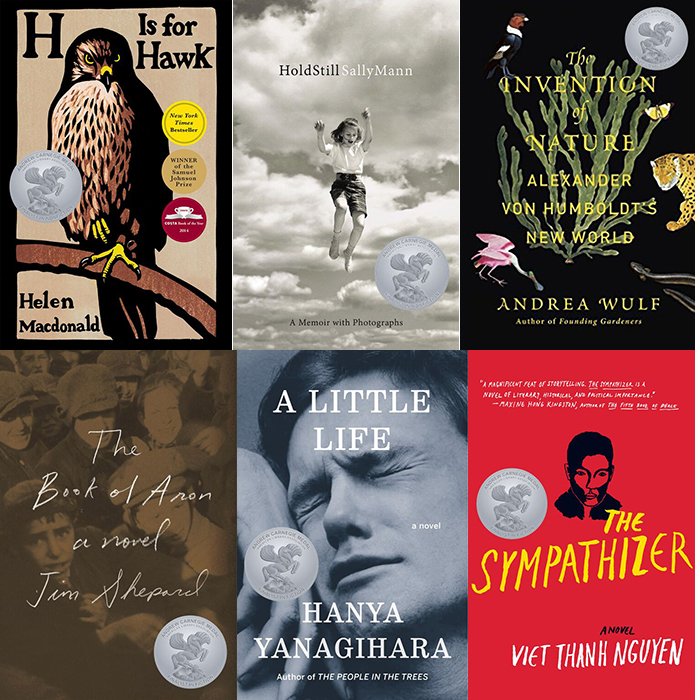 2016 shortlisted titles include: Andrew Carnegie Medal for Excellence in Nonfiction Shortlist H is for Hawk, by Helen Macdonald, published by Grove Press, an imprint of Grove Atlantic. Transfixed by books and birds of prey as a girl, Macdonald became a historian, writer, and professional falconer involved in avian research and conversation. After the sudden … END_OF_DOCUMENT_TOKEN_TO_BE_REPLACED 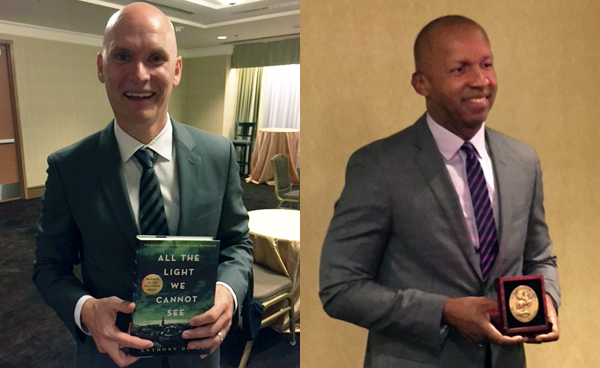 Kareem Abdul-Jabbar, the NBA’s all-time lead scorer, Basketball Hall of Fame inductee, and a New York Times–bestselling author, offered the keynote address. His first novel, Mycroft Holmes, about Sherlock Holmes’s older brother, will be published this fall by Titan Books. Abdul-Jabbar said his father was an avid reader who gave him books to find answers … END_OF_DOCUMENT_TOKEN_TO_BE_REPLACED 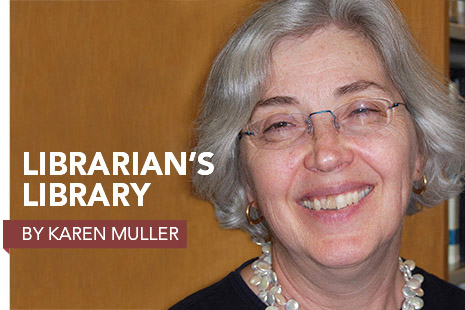 The Mother of All Booklists: The 500 Most Recommended Nonfiction Reads for Ages 3 to 103, by William Patrick Martin, is basically a crowdsourced book list. The author gathered 155 authoritative and influential lists of award-winning books and recommended reading lists from a spectrum of organizations, including parenting groups, state commissions on libraries, libraries, library … END_OF_DOCUMENT_TOKEN_TO_BE_REPLACED