Make sure your library has a communications plan in place

“There’s nothing like having a crisis when you’re going on vacation,” said Susan Jennings, dean of library services at Chattanooga (Tenn.) State Community College, to a room full of librarians who nodded knowingly and appreciatively.

Jennings was one of three panelists who headlined “Crisis Communications: Who Speaks for Your Library?,” a joint program presented by the Reference and User Services Association, United for Libraries, and the American Library Association’s (ALA) Chapter Relations Office at ALA’s Annual Conference and Exhibition in Chicago on June 25.

“I thought about calling my presentation ‘Bathrooms, Bibles, and Bias, Oh My!’” joked Jennings as she shared her experiences as past-president of the Tennessee Library Association, dealing with the fallout from state legislation that affected hers and other state chapters, including the infamous North Carolina “bathroom bill” and a move to make the Bible the state book of Tennessee.

“Any time there’s legislation like this, people are very adamant that you’re either right or wrong,” said Jennings. “If you’re espousing a core value,” as librarians do, “then you really have to take a stand.”

In Jennings’s case, she emailed a letter to Tennessee Gov. Bill Haslam letting him know what the library association’s position was. “What we tried to get across to the governor was that [naming the Bible the state book] really wasn’t the best state representation and could be seen as discriminatory.” Haslam did end up vetoing the legislation.

And once you do take that stand, you will have reporters calling you.

“Preparation is essential for this,” Jennings said, especially knowing who in your organization will be talking to media. In her current role at the college, Jennings “cannot talk to the press if something really breaks”—those matters go to the marketing department.

Brian Auger, county library administrator at Somerset County (N.J.) Library System, attempted to give attendees the lay of his library’s land by sharing some staggering figures.

“It’s a small state, and yet it has 565 towns. There are 600 independent school districts. There are 299 public libraries, and there are also 14 county library systems, and every one is put together differently,” said Auger. In just his own library, it’s “15 mayors to deal with,” 14 different Friends groups and advisory boards, seven commissioners, and 118 local media contacts. Thus a crisis can get very confusing, very quickly.

“Nothing isn’t political, and nothing isn’t local, in New Jersey,” he said. “Everyone has a stake.”

Auger described two sticky situations that happened at his system—one, a personnel issue that occurred before the library invested in a good marketing department, and the other, a patron that vocally opposed to the library’s weeding practices, which occurred after a marketing team was installed.

With the personnel issue, Auger said the library had to fire an employee and, legally speaking, “everything was dotted and crossed properly.” But the library miscalculated that employee’s popularity and social media reach, and commission meetings “became circus events with pitchforks and torches,” he said. “We had egg on our face for a while.”

Contrast that with the library’s handling of an anti-weeding detractor who badmouthed the system at every turn, including live on Gov. Chris Christie’s call-in show. “We were prepared for this one,” said Auger. “We were able to put it to bed fairly quickly.”

The library used best practices to move past the negative press handily, such as deciding ahead of time who the spokespeople are, marketing internally and externally, keeping prime stakeholders informed (“your trustees should never find out something in the grocery store”), and building positive media relationships. In fact, Auger says because he was accessible and upfront about providing background information to journalists, one outlet turned out a piece on why weeding collections is necessary.

Have a communications plan

Macey Morales, deputy director of ALA’s Public Awareness Office, provided handouts and templates that she hoped would empower attendees to create or fine-tune a crisis communications plan. “If you’re prepared, if you respond in a proper way, you’ll be successful,” she said. “You’ll be able to restore your brand and you may be able to enhance it.”

Morales stressed the importance of having protocol in place and preparing for threats, but also the smaller details, such as message consistency, knowing which distribution channels you’ll be using to respond, which intradepartmental roles to include on your crisis team, and why it’s important to beat media outlets to telling your story.

Just remember that planning is key. “Often crisis situations aren’t handled properly because most of us haven’t prepared,” Morales said. 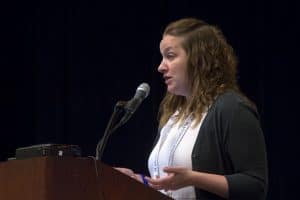