Several programs at the Public Library Association (PLA) 2022 Conference in Portland, Oregon, addressed head-on the growing trend of book challenges and efforts to censor materials in libraries and schools.

“The freedom to read and the fight against book bans is something we’re all thinking about a lot these days,” said American Library Association (ALA) President Patricia “Patty” M. Wong in her opening remarks at the March 24 Big Ideas session. She reported that book challenges had more than doubled from 2020 to 2021.

But Wong also shared positive news: A new national poll commissioned by ALA shows that efforts to ban and challenge books are opposed by most US voters.

“Large majorities of voters across the political spectrum oppose book bans and have confidence in libraries,” she told attendees. “These results truly affirm the value and integrity of library professionals at a time when we’re feeling burned out because of accusations from a small but vocal group of people.”

A surge of challenges

At “Prepare Your Library for Today’s Censorship Battles” on March 24, ALA staffers set out to answer three questions: What has changed to allow for the increase in challenges? What does this mean for libraries and library workers? And what are the best practices and strategies for how libraries should respond?

“These are well-organized, well-funded advocacy groups … [that are] remarkably successful at exploiting division and fears,” said Caldwell-Stone. These groups predominantly target titles by authors of color and those in the LGBTQIA community, she said, and falsely claim that these books promote critical race theory (CRT), Marxism, or pornography.

One reason for the proliferation of book banning efforts has been that, because of the pandemic, libraries and schools have increasingly livestreamed their board meetings. “It’s a situation which just opens up opportunities for people to find a soapbox and perform,” said OIF Assistant Director Kristin Pekoll. She remarked that many are making complaints on video to grow a social media following. “I can’t imagine how that would have ever happened before.”

Pekoll said that challenges are circulating faster and wider, those doing the challenging are getting more training (such as learning how to fill out Freedom of Information Act or reconsideration forms), and in some cases, library workers are being directly harassed.

“For anybody facing a challenge, it is incredibly stressful and incredibly isolating,” said Megan Cusick, assistant director of state advocacy in ALA’s Public Policy and Advocacy Office.

What’s more, many state legislators are trying to pass so-called “CRT bills” that would impose penalties against educators and librarians, and some people “have advanced the theory that libraries are already engaged in crime,” said Caldwell-Stone, by going to their local police departments and accusing libraries of violating obscenity laws.

“[These threats] are meant to get around the challenge process,” she said. “So far we’ve been lucky, but we’re really, really terrified.”

So what can libraries do? Be prepared, said Cusick: “It’s important to know that this is a nationwide trend, and it’s very possible it will arrive where you are.”

Cusick recommended that library workers have conversations in their communities, mobilize their trustees and Friends groups, build relationships with key decision makers, and develop a communications plan with messaging that resonates with the community.

One of the best defenses: Have is a solid collection development policy in place, said Caldwell-Stone.

It’s up to libraries to reframe the narrative, Cusick said. “There are a million different library stories, and they are created every day,” she said. “Libraries are about so much more than any single book. We must … shine the light on the whole picture.”

At “Ask a Lawyer,” part of OIF’s Intellectual Freedom Forum held March 24 at PLA 2022, attorney Stephanie Cole Adams described the current actions against libraries as “death by 1,000 cuts.” First the public or lawmakers will challenge content, she said, and then move on to gutting other aspects of the library, such as staffing, programs, and budgets.

Audience members asked how to find and hire a lawyer, whether city attorneys should represent libraries in censorship matters, when to hand over surveillance footage, how to handle First Amendment auditors, and more.

To report an instance of censorship to the Office for Intellectual Freedom, visit ala.org/tools/challengesupport. 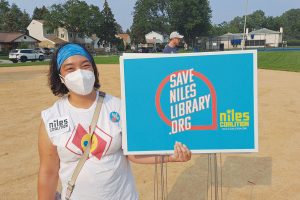 How to prevent clashes between trustees and librarianship tenets