“Libraries are an essential bedrock of this democracy and ensure that we as a nation are who we say we are,” stated Senator Cory Booker (D-N. J.) at the onset of the President’s Program at the 2016 ALA Midwinter Meeting & Exhibits in Boston on Sunday.

Introduced by ALA President Sari Feldman and Trevor Dawes and Martin Garnar of the Task Force on Equity, Diversity, and Inclusion, which cosponsored the event, Booker was on hand to talk about themes from his forthcoming book United (Penguin Random House, February 2016), including ideas for coming together, improving our country’s access to information and infrastructure, and living up to our “boldest visions and aspirations.”

Feldman indicated that Booker’s appearance was an opportunity for the ALA to share with him how libraries transform individuals and communities, and the messages underlying ALA’s multiyear Libraries Transform public awareness campaign, which launched in October 2015. “Recasting the story is incredibly important to winning the support of national decision makers like Senator Booker,” said Feldman.

There had been much reaction leading up to Booker’s talk, including a resolution from the New Jersey Library Association that expressed dismay over the choice to include Booker as part of the President’s Program, who was mayor of Newark, New Jersey, from 2006 to 2013, during a time of financial crisis when the Newark Public Library was defunded and branches were closed. Booker addressed these concerns early in his speech and said lean budgets required mayors to “make terrible decisions.”

Booker also spoke to the “caste system” that traps America’s marginalized populations, and shared personal experiences, including stories of the discrimination his parents faced in contrast to the privileges afforded to him, what it was like living in the Brick Towers low-income housing complex leading up to becoming mayor of Newark, and getting breakfast with civil rights activist Rep. John Lewis (D-Ga.) the day of his Senate swearing-in ceremony.

Quoting Alice Walker, Langston Hughes, and James Baldwin in his talk, Booker was first introduced to African American literature in his school library, he said. “There was this librarian who was probably one of greatest heroes of my education.”

Booker’s “ask me anything”

Following the program, Booker took inquiries from the audience. “This is a no-holds-barred session,” he said, joking that if he was asked “Why are you still single?” he would assume his mother was behind that question.

Booker answered questions related to incarceration and recidivism, infrastructure, and decriminalization of marijuana, as well as less serious questions about how he stays “graceful” on social media, his recent switch to veganism, and how he liked the new Star Wars movie.

Booker doled out “virtual hugs” to the audience for being thoughtful and incisive. When asked about the defunding of libraries in Newark under his tenure, Booker again addressed the topic. “Libraries are tragically defunded in Newark, under my leadership as well as previous and current leadership,” he said.

“I’m for technology grants to public libraries because libraries are the great equalizer when it comes to access to technology,” Booker said, which was met with applause.

Booker gave the last question to ALA Past President Nancy Kranich, a special projects librarian and lecturer at Rutgers University in New Brunswick in his home state of New Jersey. Joined by other past presidents, Kranich asked, “We want to know, how can we make you the number one leading US library champion?”

Booker responded: “I will jump on letters. I will jump on bills. I push technology. And I will continue to advocate for libraries into the future.” 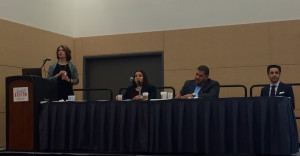 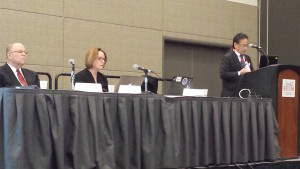 Should There Be a Right to Be Forgotten?