On Tuesday morning, ALA President Sari Feldman called the final Midwinter Council meeting to order at 9:30.

Kent Slade, chair of the Council Committee of Tellers reported the election of three ALA Executive Board members. Karen E. Downing and Andrew K. Pace were elected for three-year terms, 2016–2019. John C. DeSantis was elected to an immediate two-year term to succeed Gail A. Schlachter, who passed away April 27, 2015.

IFC also proposed the resolution User-Generated Content in Library Discovery Systems (CD#19.2), which was carried over from the 2015 Annual Conference with significant revisions and feedback during Council forum. The motion passed overwhelmingly.

In COL’s report (CD#20), Chair Ann Dutton Ewbank thanked members for the more than 10,000 messages sent to Congress on behalf of the Every Student Succeeds Act. She thanked the ALA Washington Office for a decade of advocacy on getting the bill passed.

In new business, resolutions concerning accessibility of ALA conferences and meetings for people with disabilities (CD#31), replacing the Library of Congress subject heading “Illegal Aliens” with “Undocumented Immigrants” (CD#34), and supporting the 2015 Advocacy Implementation Plan (CD#35) all passed.

ALA Executive Director Keith Michael Fiels announced final registration at 7,183 attendees and 3,622 exhibitors, for a total of 10,805, just over the Chicago 2015 total. 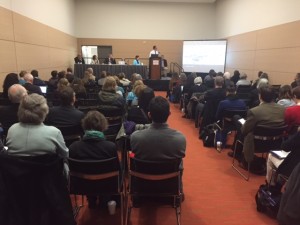 Digital Humanities: Bridging the Gap of Library and Faculty Engagement