ALA President Sari Feldman called the Council II meeting to order at 8:30 a.m. on Monday, June 27.

Sue Considine, chair of Committee on Organization, presented two action items (CD#27.1): Item 1 makes the definition of “subdivision” as an ALA division or round table, and Item 2 concerns a Chapter Relations Committee composition change. Both motions passed.

Leslie B. Burger, chair of the International Relations Committee (IRC), reported on international programs and attendees in Orlando (CD#18.1). She also welcomed attendees to the International Federation of Library Associations and Institutions conference happening in Columbus, Ohio, in August. A Resolution on the Restoration on the United Nations Depository Library System passed (CD#18.2).

James Rettig, chair of the Constitution and Bylaws Committee, proposed two actions (CD#25.1). Item 1 clarifies a provision of the bylaws to state that no person can be a candidate for two different seats in the same election. Item 2 recommends that Council approve an amendment to the ALA Constitution as a first step toward placing an amendment to Article X on the spring 2017 ballot for a vote by the ALA membership. Both actions passed.

Feldman then recognized the retiring councilors and Executive Board members.

Julius C. Jefferson gave his last report as president of the Freedom to Read Foundation (FRTF) (CD#22.1). He thanked everyone for their support over the years and welcomed new FRTF President Martin Garnar and Vice President Em Claire Knowles.

The report of the Conference Accessibility Task Force (CD#37) was given by cochairs Mike Marlin and Christopher J. Corrigan. The task force will be collecting data and conducting surveys of ALA members, and they hope to have some programming at Midwinter.

Feldman adjourned the meeting at 9:48 a.m.

All councilors met in the convention center’s lobby for a group photo after the meeting to mark the 140th anniversary of ALA.

Using the concepts of play to teach users about information literacy 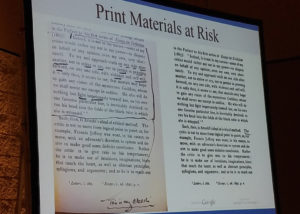 The University of Virginia scours the stacks for valuable marked books