On Sunday, June 24, the governing Council of American Library Association (ALA) passed a historic resolution that “apologizes to African Americans for wrongs committed against them in segregated public libraries” and commends those “who risked their lives to integrate public libraries for their bravery and courage in challenging segregation in public libraries and in forcing public libraries to live up to the rhetoric of their ideals.” ALA President Jim Neal read the resolution later the same day to an audience gathered at the main New Orleans Public Library to hear about this neglected chapter in library history from four individuals who participated in sit-ins and protests at libraries in the South during the 1960s. 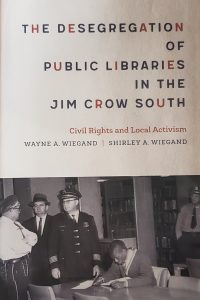 Wayne and Shirley Wiegand, authors of The Desegregation of Public Libraries in the Jim Crow South, began the presentation with some historical context. Wayne A. Wiegand, professor of library and information studies emeritus at Florida State University, said that many of his library colleagues had been completely unaware of library sit-ins in the South and assumed that librarians had been the same champions of access to all and intellectual freedom that they are in the 21st century. “Not so,” Wiegand said. “The few public libraries in the South that did provide limited services to blacks often subjected them to experiences that were humiliating.”

Wiegand gave as an example the Memphis (Tenn.) Public Library’s former policy of denying library services to African Americans unless they were there to “get a book for a white man.” In the late 1920s, a young Richard Wright, who described the incident in his 1945 book Black Boy, decided to trick the system by convincing a white coworker to help him get a book by loaning Wright his wife’s library card.

“Wright decided to forge a note to the librarian,” Wiegand said, “that read ‘Dear Madam: Would you please let this nigger boy have some books by H. L. Mencken?’ Wright explained he used the word ‘nigger’ to make the librarian feel he could not possibly be the author of the note.”

In his memoir Black Boy, Richard Wright goes on to explain: “The white librarian looked at me. ‘What do you want, boy?’ As though I did not possess the power of speech, I stepped forward and simply handed her the forged note, not parting my lips. ‘What books by Mencken does she want?’ she asked. ‘I don’t know, ma’am,’ I said, avoiding her eyes. ‘You’re not using these books, are you?’ she asked pointedly. ‘Oh no, ma’am, I can’t read.’” The ploy worked, Wiegand said, and Wright went on to become a noted novelist and poet after moving away from the South.

During the civil rights era, Wiegand said that public libraries became an early flashpoint for desegregation. He retold the stories of the Greenville (S.C.) Eight in 1960, the Tougaloo Nine at the Jackson (Miss.) Public Library in 1961, the St. Helena Four in Greensburg, Louisiana, in 1964, as well as other sit-ins and protests that led to the desegregation of libraries in the South.

But it was the panel of four people who had actually been involved in those demonstrations that drew the most interest. Here are brief excerpts of their reminiscences.

“I have a strong feeling that each generation is responsible for making his or her community a better place. So when I was growing during that time, it was frightening and demeaning. It was frightening because of the Ku Klux Klan, the beatings with the billyclubs, and calling people ‘boy.’ They were grown men. Even the ladies they called ‘boy.’ … Someone asked me ‘would you do that again?’ But you know, I really don’t know, because right now the way the world is, it’s coming back. But we have to take a stand to make things better. It’s no different now. During that period, they were beating us with billyclubs. But now they’re shooting us.”

Ethel Adolphe, one of the Tougaloo Nine who conducted a read-in at the Jackson, Mississippi, Public Library on March 27, 1961, on her experience at her trial for creating a public disturbance:

“How very glad I was then, and continue to be now, that I was not the first person in line to voice a plea. I really was at a loss. I don’t recall ever having been instructed on what to plea or on the process. … Sitting there, I kept thinking, not in a defiant way but in a try-to-understand way, that if my presence in this white library disturbs you, then I’m guilty. Thankfully, the first person sitting in line, James Bradford, said, after a long pause himself, ‘Not guilty.’ And we all quickly followed. What a pitiful outcast I probably would have been had I said ‘guilty.’”

Ibrahim Mumin, who participated in a protest at the public library in Columbus, Georgia, in July 1963:

“Columbus, Georgia, was completely segregated in 1963—the schools were segregated, the library was segregated, the parks, the playgrounds, restaurants, hotels, etc. As a young student, I thought, ‘We had all these expectations after the Supreme Court outlawed segregation in 1954.’ It had been nine years ago and we were still waiting.”

Teri Moncure Mojgani, now a librarian at Xavier University, who participated in a protest at the public library in Hattiesburg, Mississippi, in 1964:

“The summer of 1964 was different. My life would never be the same after that summer. … Was I scared? You bet. We went to the library, and there was a young woman at the desk who looked up and saw us and immediately called to someone. … An older woman came up and she said, ‘What do you want?’ We said we wanted library cards so we could use the library. ‘Well, you know, you can’t use this library. This library is only for white people.’ Someone said, ‘But our parents pay taxes, and there’s this law now. You have to let us use the library.’ … Finally she said, ‘If you stay, I’ll have to call the police.”

Wiegand concluded the presentations with a summary: “The stories we just heard are an undeniable part of Southern civil rights and library history. At every event where I’ve spoken about this topic, there are people in the audience who have stories that few others have heard. These must become part of the profession’s collective history. The outcome of desegregation is wonderful, but it is only the first step in the right direction. Young black people today must see that libraries live up to their rhetoric of being free for all.”

Videos of the full presentations of the four civil rights library heroes are online: