Facing the Past, Strengthening the Commons

Many of us, every day, are thinking much more critically about the impact digital technology has on our society,” said John Bracken, executive director of the Digital Public Library of America (DPLA), at the opening of DPLAFest 2019 on Wednesday, April 17, in Chicago. He noted how digital tools had been weaponized to destabilize and attack institutions.

DPLA has undergone changes since the nonprofit was founded nine years ago as an access point to a network of libraries’ digital holdings. Bracken emphasized that its core values would remain: collaboration; a belief in the transformational power of technology; and a commitment to being a better partner to communities, “especially those who have been historically excluded.”

“I can say that this country needs to confront and reconcile our complex past,” said Westbrooks. “I believe that libraries and archives and cultural heritage institutions can play a key role in that process.” She said she is optimistic that we will move past political divisions, but it’s important for libraries and archives to reflect on how they can facilitate that process.

Westbrooks and her staff started a system of “conscious editing” at UNC–Chapel Hill. They are reviewing records and finding aids for terms that describe people in a “marked” way—those that label marginalized groups as others, even in subtle ways. “If you see someone listed as ‘farmer,’ the assumption is that it’s a white farmer,” she said. She and her staff aim to head off that assumption by removing the default and labeling all people: white, indigenous, and others.

When it comes to reconciliation and inclusion, she urged libraries to “think about how you use your expertise to further the truth and think about how we confront our past to have a better future.”

Founder and president of Data and Society danah boyd followed with a stark indictment of how those exclusions can be weaponized. She spoke about agnotology—an area of study that looks at the production of ignorance through inaccurate or misleading scientific knowledge and erased histories. Many conspiracy theories and radical views thrive in “data voids” online, she says, where there are not results from other content sources.

“YouTube is the primary search engine for under-25s. How many of DPLA’s partners are on YouTube?” boyd asked, pointing out that many partners want to share content only on their own sites. This absence leaves a data void when users search. “There’s not a lot of high-quality content that has video explanations.”

How users phrase their search queries determines what they find on major search engines, and boyd openly wonders whether selective metadata also leaves a data void. “Should you use metadata that uses racist and pejorative terms, so that data will appear?” she said. “That’s against every sensibility that I have. But there’s an entirely different search world if you search for ‘undocumented immigrants’ versus ‘illegals.’”

Ryan Merkley, CEO of Creative Commons, spoke about the fragility of the shared open web at the day’s closing plenary session. “I still remember the open web that was hopeful, serendipitous, enabling,” he said. But today’s web “is now suspicious, curated, enclosed.”

Creative Commons is attempting to push back against that trend in a number of ways, he said. The organization is working on a Creative Commons search: “a front door that leads to all the openly licensed work publicly on the web.” It started with photos and is expanding to text and other media. The search will also enable automatic attribution so Creative Commons–licensed works can be shared more easily.

Though Merkley feels that much of the spirit of the open web has been lost, he hopes to “build something that serves as infrastructure for the web.”

Katherine Maher, executive director of the Wikimedia Foundation, closed out the day with a defense of the collaborative projects that make up the web commons. She has found that collaborative knowledge is often taken for granted. “Why it’s such a fragile and precious thing, and why it requires an entire institution of institutions to advocate on its behalf” is difficult to explain to people, Maher said.

Wikipedia has partnered with sites like YouTube to help fill the kinds of data voids that boyd highlighted. A key part of that partnership has been a push to help strengthen the web commons through participation, to everyone’s benefit.

“You’re not actually a member of the commons if you’re not participating,” said Maher. “Our push is for these platforms to invest with us in making sure the commons is sustainable, diverse, robust. If we’re going to do this, we need to have a shared responsibility.” 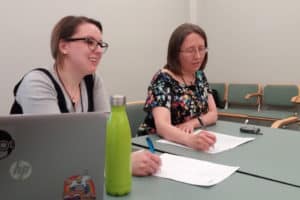 The Devil Is in the Digital Details